Senate Democrats and Independents are registering little opposition to President Donald Trump’s April 13 airstrikes on Syrian government targets, with 92 percent declining to strongly oppose the bombings on principle and just three voicing unequivocal objections to the strikes before they were carried out.

Where objections are raised by Democrats and Independents, they most frequently take the form of procedural and legal complaints, which fall short of making a judgement on whether the military intervention itself is good or bad.

The lack of dissent follows four years of congressional failure to stop — or even question — U.S. bombings in Iraq and Syria allegedly targeting ISIS and Al Nusra. Since 2014, a minimum of 6,259 civilians have been killed by U.S. coalition bombings in both countries, according to the British monitoring organization Airwars.

It is not immediately clear how many civilians were killed or wounded in the April 13 attack.

Just four out of 49 Democratic and Independent senators have expressed principled opposition to Trump’s bombing campaign: Kirsten Gillibrand (D‑N.Y.), Edward Markey (D‑Mass.), Christopher Murphy (D‑Conn.) and Bernie Sanders (I‑Vt.). Markey only vocalized his opposition after the strikes took place, and Murphy simultaneously used one of his statements to signal support for the bombing campaign against ISIS. ​“Now is the time for the U.S. to complete our mission against ISIS inside Syria, and then pull back our military effort, and focus on participating in a diplomatic process by which this war can be brought to a conclusion,” Murphy said in a statement issued April 14.

Sanders stands out for releasing a statement on April 11, well ahead of Trump’s bombings, in which he signaled his opposition to U.S. military escalation in general, although steered clear of specifics related to Syria. ​“We have been in Afghanistan for 17 years and Iraq for 15 years,” he said. ​“The result has been massive regional instability, terrible loss of life and a cost of trillions of dollars.”

Yet, 20 Senate Democrats expressed full-throated support for the bombings, without raising meaningful legal objections to the strikes. Chuck Schumer (D‑N.Y.), who voted in 2002 to give George W. Bush the authority to invade Iraq, exemplifies how this camp is handwringing over Trump’s lack of strategy while still, ultimately, sending a pro-war message. Schumer declared on Friday, ​“A pinpointed, limited action to punish and hopefully deter Assad from doing this again is appropriate, but the administration has to be careful about not getting us into a greater and more involved war in Syria.” Meanwhile, Doug Jones (D‑Ala.) said on April 14: ​“I fully support the President’s actions.”

Perhaps most notable is the failure of many lawmakers to say anything at all about the bombings. Of Senate Democrats and Independents, 10 issued statements in which they dodged questions of substance but raised often vague procedural objections. And remarkably, five —Joe Manchin (D‑W. Va.), Jon Tester (D‑Mont.), Chris Van Hollen (D‑Md.), and Ron Wyden (D‑Ore.) and Debbie Stabenow (D‑Mich.) — declined to comment at all on their official websites or social media accounts about the April 13 bombings.

Ten Democratic and Independent senators raised procedural or legal concerns while supporting military intervention on substance. Among them are rising stars in the so-called Democratic ​“resistance” to Trump — Elizabeth Warren (D‑Mass.) and Kamala Harris (D‑Calif.) — both of whom aired concerns about the lack of authorization and legal rationale after the bombings had already taken place. While Jack Reed (D‑R.I.), Dick Durbin(D‑Ill.) and Bob Menendez (D‑N.J.) each failed to challenge the strikes on principle, they did write a joint letter to Trump raising legal concerns before the bombings occurred.

In contrast, members of the U.S. House of Representatives have issued slightly stronger joint letters. The Congressional Progressive Caucus released a statement on April 10 declaring, ​“Syria’s civil war continues to be a complex regional conflict, and it has become increasingly clear that U.S. military interventions will likely add to the mass suffering in Syria.” And on April 13, a bipartisan group nearly 90 U.S. representatives released a letter calling on Trump to ​“consult and receive authorization from Conress before ordering additional use of U.S. military force in Syria.”

Absent a strong push against war itself, however, it is unclear what impact legal objections will have, given that Congress has failed to rein in either former President Barack Obama or Trump for waging an open-ended war on ISIS without congressional approval.

The 2001 Authorization for Use of Military Force (AUMF), which green-lighted U.S. retaliation for the September 11 attacks, has since been invoked to justify at least 37 military actions in 14 countries: Afghanistan, Georgia, Yemen, Djibouti, Cuba, the Philippines, Kenya, Ethiopia, Eritrea, Iraq, Somalia, Libya, Turkey and Syria. Scattered efforts by lawmakers to challenge these actions on the grounds that the AUMF is being broadly — and unlawfully — interpreted have made little progress.

At any point, lawmakers can invoke the 1973 War Powers Resolution to attempt to force the Congress to halt U.S. intervention in Syria, as recently exemplified by the effort of Sens. Sanders and Mike Lee (R‑Utah) to halt U.S. support for the Saudi-led war on Yemen. Emergency measures to prevent and stop U.S. wars are taking on new urgency now that John Bolton — who has called for U.S. military attacks against Iran and North Korea — is Trump’s new national security advisor. Given lawmakers’ overwhelming unwillingness to challenge the pro-war consensus, it appears that strong grassroots pressure will be required to stop any future military actions by the Trump administration.

In These Times evaluated statements by Democratic and Independent senators and classified them to the best of our ability, given the vagueness of many lawmakers’ remarks. 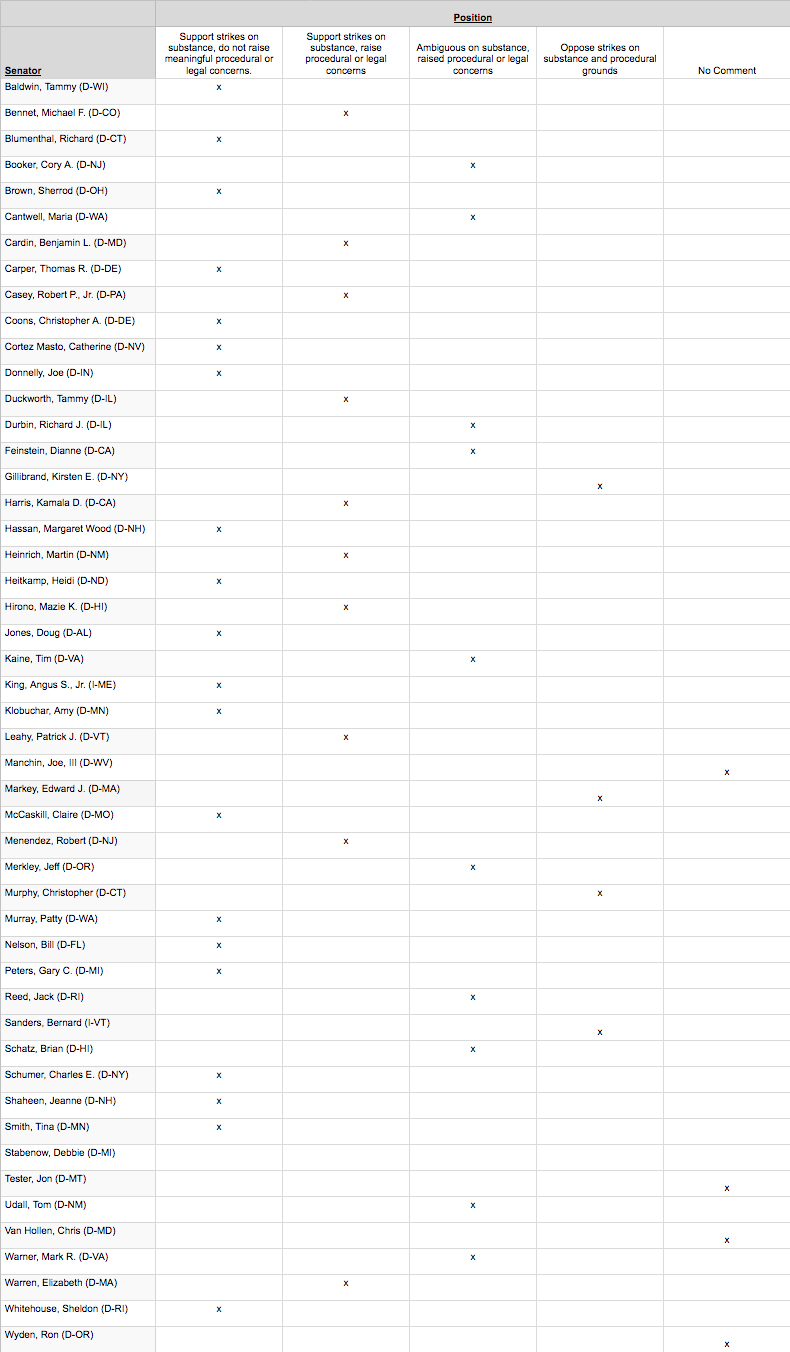 Sarah Lazare is web editor and reporter for In These Times. She tweets at @sarahlazare.

Have thoughts or reactions to this or any other piece that you'd like to share? Send us a note with the Letter to the Editor form.
More articles by Sarah Lazare
Feature
The Hypocrisy of Biden's New "Blame the Unvaccinated" Strategy
As long as we're blaming individuals, we are not talking about how the Biden administration's policies are failing the world.
Feature
120 Manufacturers in the Global South Could Be Producing mRNA Vaccines If Big Pharma Would Only Show Them How
A new report finds that pharmaceutical monopolies are preventing the production of significant quantities of vaccines in Africa, Asia and Latin America.
Feature
The Weapons Industry Is Jubilant About Biden's Nominee for Pentagon Arms Buyer
Bill LaPlante's nomination is just the latest spin through the revolving door between the Pentagon and the military industry.
Similar articles
Feature
To Stop Trump’s War with Iran, We Must Also Confront the Democrats Who Laid the Groundwork
Democratic leaders are feigning outrage, but they've supported the precursors to war.
Sarah Lazare and Michael Arria
Feature
Too Big Not To Organize
An international coalition of unions, led by SEIU, tries to unionize capitalism's core: the banks.
Mike Elk
Feature
Timeout for Labor in Florida
Union leaders huddle to assess alliances, propose jobs program.
David Moberg
Join our newsletter
Fearless journalism, emailed straight to you.
Subscribe and Save 66%