Nine weeks after President Trump tapped Sonny Perdue to head the Department of Agriculture (USDA), the former Georgia governor is scheduled to appear before the Senate Agriculture, Nutrition and Forestry Committee today (Thursday, March 23) for his nomination hearing.

Perdue was Trump’s second-to-last cabinet pick and is one of two yet to be confirmed. A former Democrat who became a Republican in 1998, Perdue has spent most of his professional life involved in different agribusiness sectors. Potential conflict-of-interest disclosures and other required paperwork reportedly delayed the confirmation process but have since been submitted and completed. A known quantity in the Big Ag realm, Perdue boasts broad support from large farm groups, like the Farm Bureau, and industry executives. The sustainable food movement is less excited.

In addition to clarifying his stance on a wide range of issues facing rural communities (including the dire need for a sane 2018 Farm Bill), Perdue will likely be asked to comment on America First: A Budget Blueprint to Make America Great Again—the new administration’s cutting edge plan to drastically reduce federal spending in certain areas in order to buy fighter jets without raising taxes. 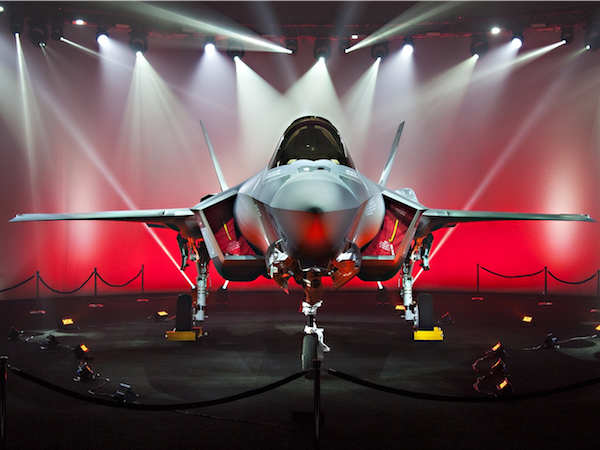 The Lockheed Martin F‑35A Lightning II shown above. Already $163 biillion over budget, the F35 is the most expensive weapons system in history and has been described as ​“too big to kill.” (Image: busi​nessin​sid​er​.com / Lockheed Martin)

The Department of Agriculture consists of 29 different agencies and services that employ more than 100,000 people. But according to the recently released 53-page ​“skinny” budget proposal, USDA is facing a $4.7 billion — or nearly 21 percent — decrease in current discretionary spending levels.

Short on devilish details, the proposal:

Agriculture organizations and politicians on both sides of the aisle have widely criticized this portion of Trump’s proposal, pointing out these cuts will negatively affect many of the same rural communities that helped propel the Emmy-nominated television star to victory last November.

For a more in-depth look at what’s in store for Sonny Perdue and what’s at stake for rural America, check out ​“Trump Nominates a Secretary of Agriculture (and, No, It’s Not Wendell Berry).” Important to note: Sonny Perdue and U.S. Sen. David Perdue (R‑GA) are cousins but not related to the owners and operators of Perdue Farms.

To view live footage of the hearing, scheduled to begin at 10 a.m., click here.

This blog’s mission is to provide the public service of helping make the issues that rural America is grappling with part of national discourse.
Have thoughts or reactions to this or any other piece that you'd like to share? Send us a note with the Letter to the Editor form.
More articles by Rural America In These Times
Rural America
An Open Letter to Biden from Indigenous Peoples
Trump wrecked the relationship between the U.S. government and Native nations. Here's how the Biden Administration can repair this damage.
Rural America
In Less Than One Generation, We’ve Lost More Than 10 Million Acres of the Best U.S. Farmland
Rural America
Two Conversations About “Sustainable Capitalism” and “The Art of Work”
Similar articles
Rural America
Vandana Shiva: The Pandemic Is a Consequence of the War Against Life
The health emergency of the coronavirus is inseparable from the health emergency of extinction, biodiversity loss and climate change
Vandana Shiva
Rural America
The EPA Has Abandoned Its Duty To Protect the Environment. ‘Rights of Nature’ Laws Can Fill the Void
Kai Huschke and Simon Davis-Cohen
Rural America
As Development Destroys Habitat, Wildlife Finds Refuge on Battlefields
Todd Lookingbill and Peter Smallwood
Join our newsletter
Fearless journalism, emailed straight to you.
Subscribe and Save 66%