The Fast Against the Firings

OAKLAND, CALIF. – Even though the full Senate is debating the immigration reform bill S. 744, labor and community activists in northern California charge that the Immigration and Customs Enforcement (ICE) agency of the federal Department of Homeland Security continues to require local employers to fire hundreds of workers, saying they have no immigration papers. In protest, dozens of Bay Area immigrant workers and their supporters went without food last week in a 72-hour hunger strike to draw attention to hundreds of these firings. 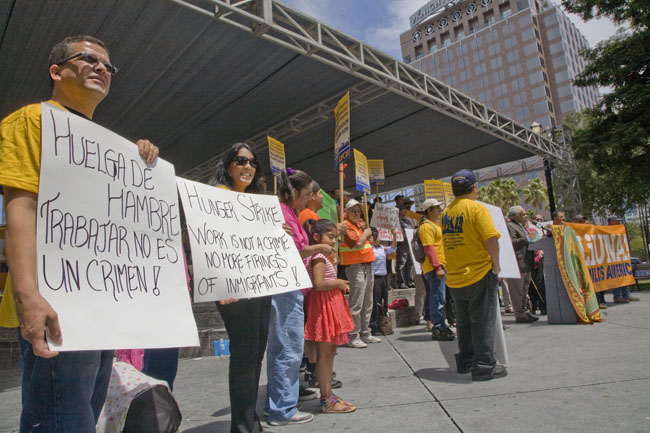 The Obama administration, which strongly supports S. 744, calls the proposal ​“commonsense immigration reform.” The fasters charged, however, there is no common sense in firing workers while Congress debates the bill.

The bill’s supporters tout the provisional legal status it would give some undocumented workers, like those currently being fired. But workers who are now losing their jobs in these workplace enforcement actions will not be rehired even if thebill passes, critics charge. Further, the job losses will push fired workers into poverty, below the income requirement that the bill imposes to qualify for legalization. 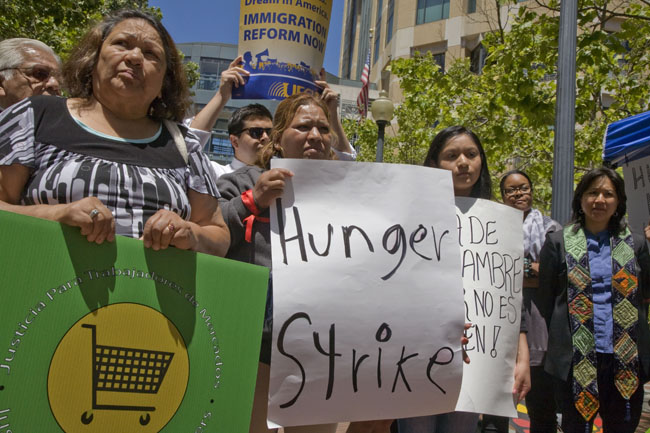 These firings are often called ​“silent raids.” Under the Bush and Clinton administrations, immigration agents dressed in black uniforms and carrying high powered weapons invaded factories and workplaces, rounding up undocumented workers in heavily publicized raids. The ​“silent raids,” in contrast, are not publicized at all. Instead of agents with guns, immigration agents force employers to fire workers. If people without papers can’t work, the rationale goes, they will simply leave the country or somehow disappear.

The fasters sought to make the victims of these ​“silent raids” visible and to express their moral outrage over the federal government’s tactic. Rev. Dr. Phil Lawson, Pastor Emeritus of Easter Hill United Methodist Church and leader of the Black Alliance for Just Immigration, one of the fasters, declared, ​“These families have done nothing wrong. They’re being punished for working, which is what people in our community are supposed to do. We will not allow these workers to be treated as though they are invisible. Being terminated because of immigration status is a violation of their human and civil rights.” 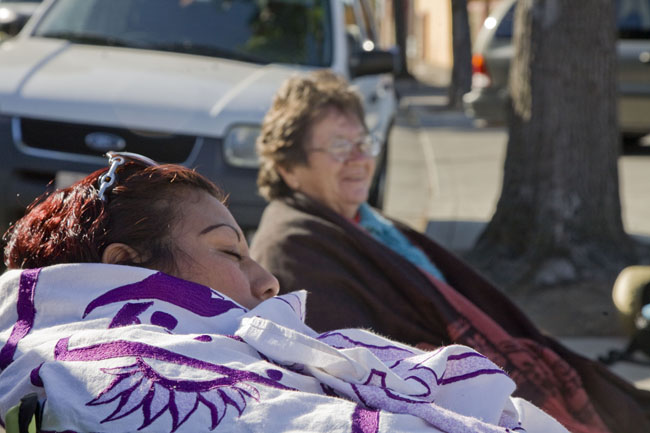 Fasters sleep on the sidewalk.

In theory, this law penalizes the employer for hiring them (the ​“sanctions”), and penalizes workers by requiring the employer to fire them. In reality its effect is to make it illegal for an undocumented worker to work. Employers dependent on immigrant labor treat the possibility of violations and fines as a cost of doing business. Most employers receive no penalty, while thousand of workers lose their jobs and their families and communities suffer the hardships. Employers who cooperate in firing their own workers are given immunity by ICE, and escape any fines or punishment for violating the law.

Since 1986, every job applicant in the U.S. must fill out an I‑9 form declaring her or his immigration status. In an I‑9 audit, ICE makes a detailed examination of those personnel records, especially Social Security numbers, and then gives the employer a list of workers it says are undocumented, ordering the employer to fire them. 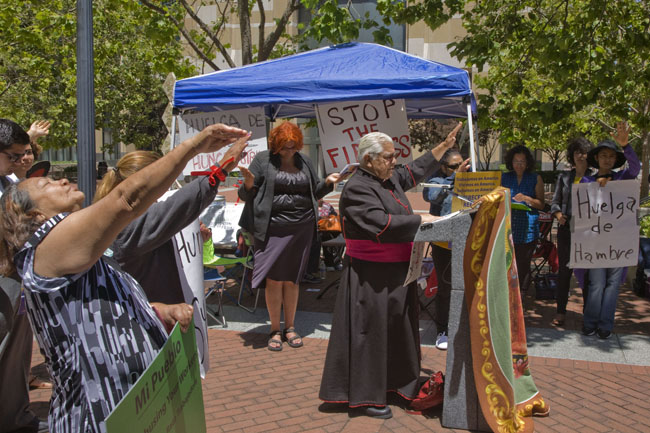 Monsignor Antonio Valdivia, a retired pastor in the Oakland diocese, calls on the government to stop the firings.

In addition to protesting the ongoing firings, the fasters object to a provision in the new immigration bill. Currently, federal law specifies that only certain employers, such as some federal contractors, have to immediately report the information on the I‑9 form of each potential hire to ICE for comparison with E‑Verify, an enormous database of Social Security numbers, visa information and other personal data. (Any employer can be subject as well to the after-the-fact I‑9 audits.) But Senate bill S. 744 would make E‑Verify mandatory for all U.S. employers. That would turn the current wave of firings, which today encompasses thousands of workers, into a flood that could easily affect millions.

The hunger strikers, therefore, had two demands. They demanded that ICE stop forcing employers to fire workers, whether or not the bill passes. And it called on Senators and Congress members to reject the inclusion of mandatory use of E‑Verify in any immigration reform legislation. 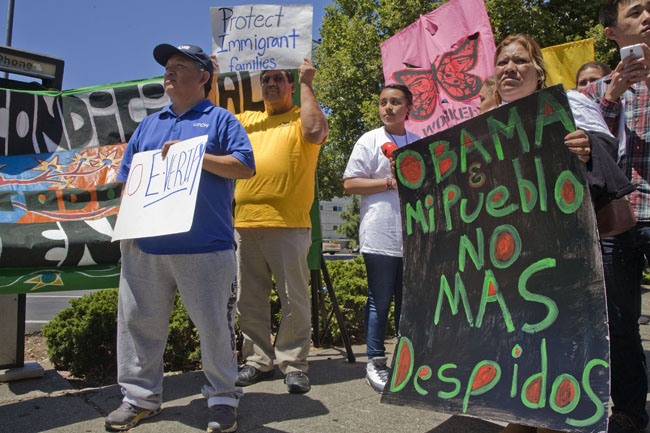 The Obama administration has increased immigration enforcement in the workplace drastically from the Bush and Clinton eras. In the last two years alone, thousands of janitors have been fired in Minneapolis, Seattle and San Francisco, thousands of garment workers in Los Angeles, hundreds at Chipotle fast food restaurants and Target stores, and many many more. Among the many Bay Area firms where firings have taken place recently are Mi Pueblo Markets (hundreds fired), Pacific Steel (214 workers fired), Waste Management (three workers fired) and ABM (475 workers fired). In just the last few months, ICE has enforced the firing of 125 workers at the DoBake industrial bakery in Oakland, and over 200 at Joseph Albanese Construction in Santa Clara.

Another faster, Gerardo Dominguez, organizing director of Local 5 of the United Food and Commercial Workers, calls the firings ​“an economic disaster for the Bay Area. These workers pay taxes that support local schools and services. Being terminated because of immigration status is a violation of their human and civil rights. Their families and our entire community will be harmed, and inequality and poverty will increase.” The fasters asked local elected officials to intervene with Homeland Security Secretary Janet Napolitano, and ask her to halt the actions. 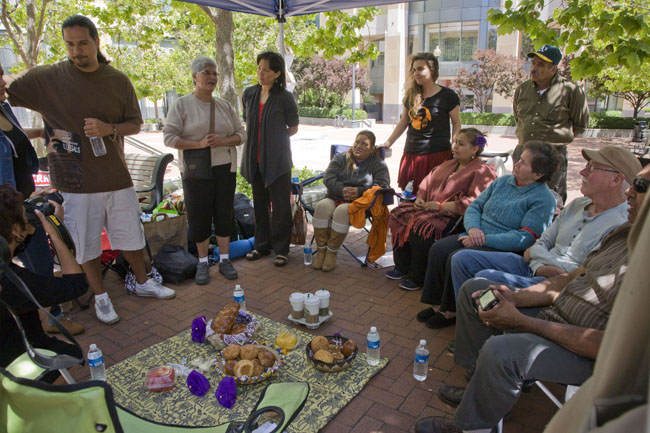 A worker from the DoBake industrial bakery describes being fired as fasters prepare to end the hunger strike.

One worker from the DoBake industrial bakery is in her 60s and worked 16 years at the bakery earning minimum wage. She now faces loss of her health insurance, which covered expensive high blood pressure medications. Another worker fired at Waste Management Inc. says, ​“I’m a good worker and I did a very dirty job. I’m not young, and I won’t be able to find another one. People depend on me. What are we going to do?”

Because the firings are taking place throughout the Bay Area, the fast moved to different symbolic locations. It began with a rally in Cesar Chavez Park in the heart of downtown San Jose. The south bay was a focus because of the recent audit and firing of workers at Albanese Construction, headquartered in Silicon Valley. The firm is one of the Bay Area’s largest construction companies, and its employees are all union members. 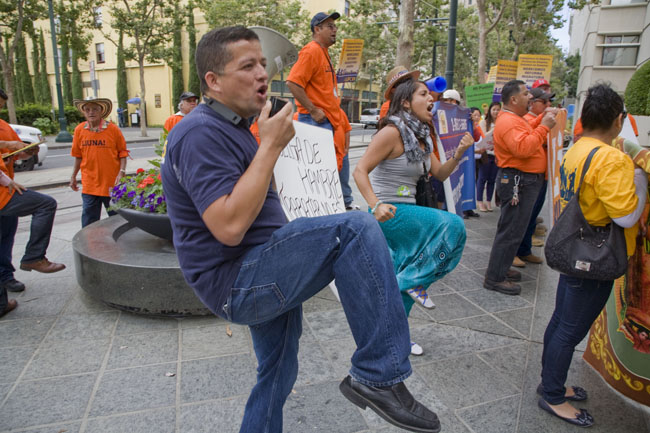 Richard Konda, executive director of the Asian Law Alliance in San Jose, called on ICE ​“to exercise commonsense judgment now and stop their enforcement that has resulted in hundreds of workers being fired. It makes no sense for these workers to lose their jobs now, with immigration reform on the horizon.” Konda called on Congress ​“to repeal employers sanctions that were part of IRCA, abolish the I‑9 form and end any and all E‑Verify programs. Employers should not be junior immigration inspectors,” he said.

From the park, fasters marched to the San Jose Federal Building. They heard a statement from Congressman Mike Honda supporting them for ​“standing up for the civil rights of our laborers and in opposing the unfair and unjust ​‘silent raids’ occurring throughout our region.” Honda announced his opposition to a provision of the proposed Senate immigration reform bill S. 744, which would make it mandatory for all employers to use the E‑Verify system to detect workers with no papers. ​“Time and again,” he said, ​“we see Americans, both documented and undocumented, treated like second-class citizens by the flawed E‑Verify system. Not only do our businesses suffer from having to submit to these ​‘silent raids,’ but hundreds of thousands of livelihoods are ruined, families are split apart, and local economies are hurt badly.” 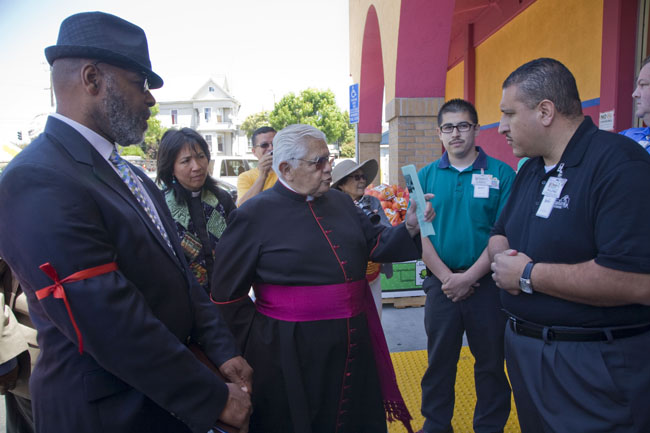 Monsignor Antonio Valdivia and other faith leaders ask the manager of Mi Pueblo Market to stop the firings.

The following day fasters moved to east Oakland, where they set up tents on the sidewalk surrounding the parking lot of the largest store in the Mi Pueblo supermarket chain. A year ago unions and community organizations protested the use of the E‑Verify immigration screening system by the Mexican markets, and accused the owner of using immigration enforcement to terrorize workers during their effort to organize a union in the stores. Workers have been trying to join Local 5 of the United Food and Commercial Workers Union for the past two years, in a bitter campaign.

This April, Mi Pueblo confirmed that it was being audited by ICE and would have to fire an undisclosed number of employees. Some community and labor activists estimate that, given the chain’s many markets, the firings could encompass hundreds of workers.

As fasters gathered in front of the store, a group of religious leaders met with the manager to demand that the firings stop, and that the company respect the rights of its workers. They were not given any answer. Then fasters marched through the parking lot behind the Liberation Brass Orchestra, and were later joined by an Aztec dance troupe. 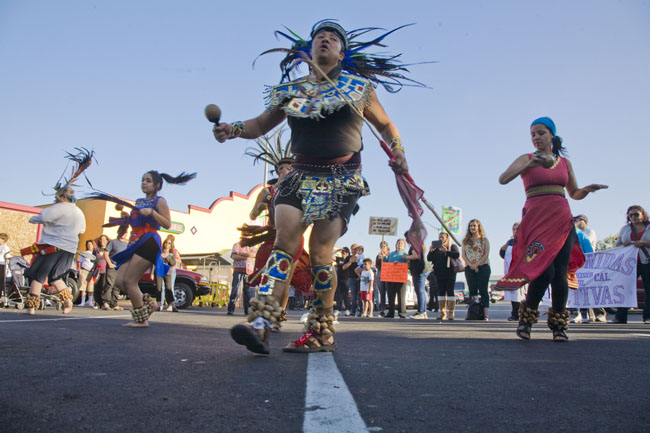 The last day of the fast was held in front of the Oakland Federal Building, with the support of both the South Bay and Alameda Labor Councils and many local unions. Representatives of Congresswoman Barbara Lee and Congressman Eric Swalwell both declared their support of the hunger strike’s objectives. As the hungry participants shared loaves of bread to break their fast, they acknowledged that a long fight would be needed to get the government to end the firings, whether or not Congress passes an immigration reform bill.

​“But this is just the beginning,” predicted Fred Pecker, secretary treasurer of Local 6 of the International Longshore and Warehouse Union. In April a similar fast was organized in San Diego to support workers fired in an audit at the Mission Valley Hilton Hotel.

​“We are extremely worried,” emphasized Rev. Deborah Lee of the Interfaith Coalition for Immigrant Rights. ​“Congress is pushing a reform bill poised to make matters worse,” she warned. ​“The bill will make the employment verification program, E‑Verify, mandatory for all employers, and the firings we’re seeing now will become much more widespread. Our elected representatives must tell ICE and Congress to end these firings and take the mandatory use of E‑Verify out of the immigration bill. We must stop making it a crime to work in this country.” 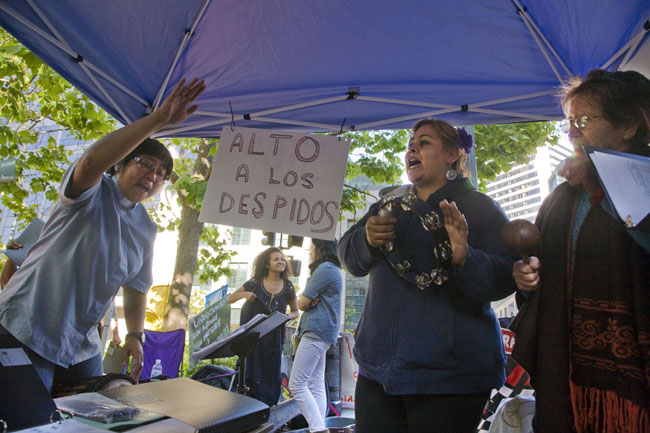 Fasters sing as they get ready to spend the night in downtown Oakland.

See the options
David Bacon is a writer, photographer and former union organizer. He is the author of The Right to Stay Home: How US Policy Drives Mexican Migration (2013), Illegal People: How Globalization Creates Migration and Criminalizes Immigrants (2008), Communities Without Borders (2006), and The Children of NAFTA: Labor Wars on the US/​Mexico Border (2004). His website is at dba​con​.igc​.org.
Have thoughts or reactions to this or any other piece that you'd like to share? Send us a note with the Letter to the Editor form.
More articles by David Bacon
Labor
Hundreds of Fruit Packing Workers Are On Strike
Labor
Don’t Punish the Dreamers—Punish the Corporations Driving Forced Migration
Labor
40,000 AT&T Workers Begin 3-Day Strike
Similar articles
Uprising
Suicide or Not, First Known Death in CA Hunger Strike Reflects Inhumane Prison Conditions
George Lavender
Uprising
Why I Followed Rahm Emanuel to the Bathroom
Joel Handley
Uprising
‘Let’s Run Amok in This Pit’: For Anne Scargill, The Fight Goes On
Kari Lydersen
Join our newsletter
Fearless journalism, emailed straight to you.
Subscribe and Save 66%