The Kids Are Not All Right: GE Soybeans Alter Nanny’s Milk and Stunt Growth, Research Finds

Pregnant goats fed with genetically engineered (GE) soybeans have offspring that grow more slowly and are shorter, according to a new Italian study, ​“Genetically modified soybean in a goat diet: Influence on kid performance,” published in the journal of Small Ruminant Research. The researchers tested the effects of supplementing the feed of female goats with Roundup Ready soybeans, which are engineered to resist the herbicide Roundup and are sold by agribusiness giant Monsanto. They are some of the most widely grown soybeans in the world.

The reduced growth of the goat kids was attributed by the researchers to their observation that the milk of the GE-fed mothers was significantly less nutritious and contained less of the IgG antibodies important for early growth.

“This was a carefully conducted study,” says Dr. Judy Carman, director of the Institute of Health and Environmental Research, Australia. ​“The differences in the composition of the colostrum between the mothers fed the GE soy and the non-GE soy were particularly striking. The colostrum from the GE-fed mothers contained only 2/3 of the fat, 1/3 of the protein and close to half of the IgG of the mothers fed the non-GM soy,” says Carman, who was not involved in the research.

After the mothers gave birth all offspring were fed only with their mother’s milk for 60 days. The growth of these kids was measured twice. After both 30 days and 60 days, the kids of GE-fed mothers were approximately 20 percent lower in weight and shorter in stature. Both these differences were statistically significant.

Lower offspring weights were not the only unexpected findings. The researchers also found that the milk of GE-fed goats was lower in protein and fat. This difference in milk quality was large (6 percent protein in both GE-fed groups versus 18 percent in both non-GE fed groups) for the first few weeks after birth but gradually disappeared — even though the mothers continued to be fed the GE soybeans. Additionally, the researchers found that the colostrum produced by GE-fed mothers had low amounts of IgG antibodies. These antibodies are important for growth and for healthy immune development. 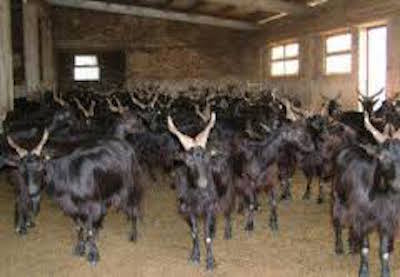 Interestingly, the researchers found that all of the kids were of similar size at birth, regardless of whether their mothers ate Roundup Ready GE soybeans or not. The researchers therefore proposed that the stunting of the offspring of GE-fed mothers reflected a milk deficiency. Presumably either the lower nutritional value of the colostrum and milk of GE-fed mothers or the colostrum antibody differences that were observed. The authors noted that low IgG antibody levels in colostrum are correlated in other ruminants with slower growth and also that IgG antibodies are known to have a role in nutrient absorption because they promote gut development in newborns.

The researchers did not discuss whether the transgene DNA fragments found in the milk played a role in altering kid development.

This result is the strongest demonstration so far of altered growth and development in offspring of GE-fed mothers. The same researchers in 2010 showed altered activity of the lactic dehydrogenase enzyme in kids fed milk from mothers that ate GE Roundup Ready soybeans. In that previous study, by some of the same Italian researchers, however, no additional effects on goat offspring were detected.

“It is already known that Roundup Ready soybeans have various defects including a Manganese deficiency. Yet regulators and GMO developers have continuously dismissed credible reports of GMO crops causing apparent harm to animals, from many different research groups.,” says. Allison Wilson of the Bioscience Resource Project. ​“Hopefully they will not ignore yet another study.”

(A version of this article appeared on inde​pen​dentscience​news​.org.)

Support In These Times
Jonathan R. Latham, PhD, is co-founder and executive director of the Bioscience Resource Project, which is the publisher of Independent Science News (inde​pen​dentscience​news​.org). He has published scientific papers in disciplines as diverse as plant ecology, virology, genetics, and RNA biology.
Have thoughts or reactions to this or any other piece that you'd like to share? Send us a note with the Letter to the Editor form.
More articles by Jonathan R. Latham
Rural America
This is Why Gene Editing of Plants and Animals Needs to be Regulated
Rural America
Is the Biotech Industry Transforming a Natural Pesticide into a Super Toxin?
Rural America
4 Ways the Biotech Industry is Taking Over GMO Regulation from the Inside
Similar articles
Rural America
Recognition of Native Treaty Rights Could Reshape the Environmental Landscape
The U.S. has largely ignored the nearly 400 treaties signed with tribal nations, but that may be starting to change. And some think that could prevent, or even reverse, environmental degradation.
Alex Brown
Rural America
Deadly Drift: The Herbicide Dicamba is Damaging Trees Across the Midwest and South
Johnathan Hettinger
Rural America
Our Food System Hurts Farmers, Consumers and the Earth. We Can Build a Movement to Change It
Anthony Flaccavento
Join our newsletter
Fearless journalism, emailed straight to you.
Subscribe and Save 66%