“To this mayor, black and brown lives do not matter”: 3 Arrested at Die-In at Rahm Emanuel’s Office

A chaotic scene played out on the fifth floor of Chicago’s City Hall Tuesday morning. In one corner, clergy members argued fervently with police officers amid a scrum of journalists to be allowed in to Mayor Rahm Emanuel’s office to present their demands on police accountability.

“We are back because to this mayor, black and brown lives do not matter. He does not care, and he has not made any effort to show us that he cares.”

Behind them, dozens of protesters looked on as 30-some activists lay on the floor in a die-in — a protest action that’s become a mainstay of the Black Lives Matter movement — belting out ​“We Shall Overcome.” And behind the rope separating Emanuel’s office from the protest, a slowly growing number of police officers trickled in to stand between the clergy and their eventual target: the door leading to the mayor’s office.

“We just want to talk to the mayor,” came the entreaty from the negotiating clergy.

In the end, it took three arrests and nearly an hour of testimonials and consultations before four clergy members were allowed past the rope barrier to present their demands to a member of Emanuel’s staff. The protest — led by the Community Renewal Society, a religious-based social justice organization — was the latest in a series of actions aimed at pressuring Emanuel to address alleged police abuses that have come to dog his campaign for reelection ahead of the April 7 run-off. 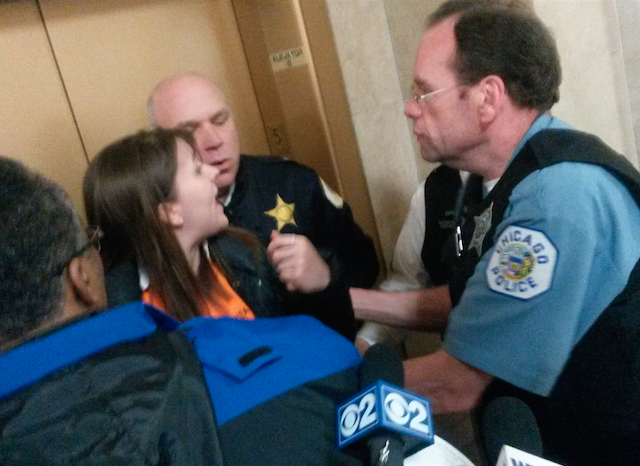 The day before the protest, the American Civil Liberties Union released a report showing that Chicago police stopped more than 250,000 people last summer for questioning without making any arrests — a policy that closely mirrors the ​“stop and frisk” program in New York City that came under heavy scrutiny before being scaled back by Mayor Bill de Blasio. And allegations that the Chicago Police Department ran an interrogation center where suspects were held without being officially booked — essentially keeping them ​“off the books” — have made international headlines.

The demands of the protesters that stormed City Hall on Tuesday touched on police issues across the board with three key demands: reforming the body camera pilot program, creating independent citizen oversight in place of the mayor-appointed entity currently in place, and ending stop and frisk.

“We have asked the mayor since December to meet with us and discuss police brutality, but [his office] still did not respond at all,” said Charles Anderson, an activist with CRS. ​“We are back because to this mayor, black and brown lives do not matter. He does not care, and he has not made any effort to show us that he cares.”

One of the Community Renewal Society’s demands, a reform of the Chicago police body camera pilot program, aims to provide oversight over police encounters that they say is missing from the rules currently governing the program, which was launched earlier this year. The group says the program should include consequences if officers turn off their cameras during an exchange with a civilian, disclosure of the recordings to people who are recorded and public participation in evaluating the camera program.

The group is also demanding that the city do away with the Independent Police Review Authority, the mayor-appointed body charged with overseeing complaints against police. IPRA can make suggestions for action against a police officer but has no power to carry out any discipline. In 2014, IPRA sustained 6.42 percent of allegations leveled against police officers. CRS wants IPRA to not only have disciplinary powers, but to change the investigative process to create what they call ​“real accountability.”

Police accountability has become a key issue in Chicago’s current mayoral election. Jesus ​“Chuy” Garcia, Emanuel’s opponent in the upcoming run-off, has called for an independent investigation into Homan Square, the detention center at the focus of an expose by The Guardian. The allegations are ​“troubling,” Garcia told the Windy City Times. But Garcia has also run awry of some police accountability activists by calling for the hiring of 1,000 more police officers to combat violence in the city — a promise they believe doesn’t target the economic disparities that drive violence.

Emanuel, for his part, has dismissed the Homan Square allegations, and has been reported as saying ​“that’s not true” and that ​“we follow all the rules.” Protesters have called for the site to be shut down.

Larry Singleton, 56, was one of the demonstrators at the civil disobedience action. He says the fight against police brutality he is part of in Chicago brings him back to his childhood growing up in Civil Rights-era Mississippi.

“I’ve been protesting a long time. I grew up in Missisipi, so I know injustice. Back then it was the Klan, but now the police are like the new Klan, in a way,” says Singleton. ​“I’ve never seen so much killing and beating of young blacks since then.”

He says he has had multiple encounters with the CPD. In one case, he was stopped by police who then booked him for drug possession, but the case was later dropped when a judge determined that Singleton had been improperly searched.

“It’s not a good situation, but it takes the people to come out and stop it,” he said.

Yana Kunichoff is a Chicago-based investigative journalist and documentary producer. Her work has appeared in the Guardian, Pacific Standard and the Chicago Reader, among others. She can be reached at yanakunichoff at gmail​.com.
Have thoughts or reactions to this or any other piece that you'd like to share? Send us a note with the Letter to the Editor form.
More articles by Yana Kunichoff
Labor
Second City Has Been a Comedy Mecca for Decades. Now Its Workers Are Voting to Form a Union.
Dispatch
When Green Jobs Come at the Expense of Unions
A declining Rust Belt town turned to wind power—and away from organized labor.
Feature
Sanctuary in the Streets: How New Alliances Are Revitalizing a Past Movement
A revitalized sanctuary movement is spreading to unexpected places, resisting the threats posed by Trump’s presidency.
Similar articles
Feature
Generals and Cops Trained by the Pentagon Are Staging Coups All Over the World
U.S. trained and educated officers are toppling governments and expanding American proxy power.
Nick Turse
Feature
People vs. Empire
Only global resistance from below can counter repressive states
Arundhati Roy
Feature
Come Together Right Now
Labor unions reconfigure to battle huge multinationals
David Moberg
Join our newsletter
Fearless journalism, emailed straight to you.
Subscribe and Save 59%