One of the pending regulations released in the final days of the Obama administration, and put on hold by the Trump White House, was an already controversial rule that pits legitimate family-scale organic farmers against the operators of ​“factory farms” — industrial-scale operations accused of violating existing organic animal welfare standards. A newly released analysis by The Cornucopia Institute, an organic industry watchdog, explains what is at stake and why economically powerful forces in organics are squawking over new space requirements proposed for chickens.

The Organic Livestock and Poultry Practices Rule was published in the Federal Register on Jan. 19, and amends current organic livestock and poultry production requirements. The new rule adds provisions for livestock handling, avian living conditions, transport for slaughter and expands and clarifies existing requirements covering livestock care and production practices. It includes mandates for the care of cattle, hogs, and poultry.

“The new rulemaking was in response to a more than decade-long controversy about concentrated animal feeding operations (CAFOs), or factory farms, confining as many as two million laying hens on a single ​‘farm’ without the legally mandated access to the outdoors,” says Mark A. Kastel, Senior Farm Policy Analyst at The Cornucopia Institute. ​“This rule neither solves the problem nor makes any faction in the industry happy.” 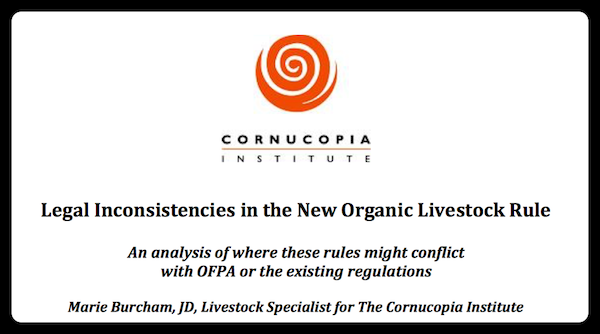 Farmers who produce eggs or raise chickens for meat and abide by the requirements for outdoor access, or go even further and rotate their animals on high quality pasture, felt betrayed by weak recommendations to the USDA that came out of the National Organic Standards Board (NOSB), a congressionally mandated USDA advisory panel. At the time, the recommendations were shepherded through by the employee of one of the major organic egg producers, Organic Valley. [Note: The chief legal counsel for Organic Valley is currently board chair of the powerful industry lobby group, the Organic Trade Association.]

The NOSB recommendations, which were incorporated into the pending rule, call for approximately 2 ft² per bird outdoors. In addition, although cages remain banned, multi-level ​“aviary systems” are allowed. These systems are not required to provide more than approximately 1 ft² per bird indoors. For comparison, Organic Valley requires 5 ft² per bird of outdoor access for their farmers producing eggs, and European Union organic regulations require 43 ft² per bird.

“Our analysis indicates that the inadequacy of these rules puts them in direct conflict with existing regulatory language that requires farmers to establish and maintain year-round livestock living conditions which accommodate the health and natural behavior of the animals,” says Marie Burcham, a Cornucopia researcher and an attorney with training in environmental and animal law.

For poultry, to avoid undue stress that can cause aggressive behavior and injuries to flock mates, birds need adequate space to engage in ​“foraging behavior.” This includes scratching and pecking at the ground for seeds, invertebrates, grass, and weeds. ​“When deprived access to adequate, high-quality outdoor space birds can become aggressive, which leads confinement-based egg producers to trim the animals’ beaks. This practice makes it more difficult for birds to forage, and isn’t needed on pasture-based farms. Unfortunately, it’s still viewed as necessary and allowed under the new regulations,” says Burcham.

The USDA announced last Wednesday that the new rule would be delayed for 60 days, until May 19. Industrial egg lobby groups are happy to see this rule tabled. The conventional egg industry, which has invested in ​“organic” confinement egg production, is calling on the USDA to rescind the rule for good. ​“After making campaign contributions to key members of Congress, and lobbying for the rule’s demise, there is a chance these big-industry groups will get their wish. With the extensive new requirements for poultry, including laying hens, conventional egg producers who dip their toe into ​‘organic‘ agriculture will find it more costly to operate,” says Burcham.

Doing it the right way no matter what

The controversy came to a head after the USDA failed to enforce regulations requiring ​’all‘ organic livestock to have access to the outdoors. The agency was allowing major egg producers a loophole by recognizing small porches with concrete floors and ceilings as satisfying the required ​“outdoor” space. ​“In most instances, even if a court would accept that an enclosed structure was ​‘outdoors,’ these minute porches typically only hold 1-3 percent of the birds,” says Kastel. ​“Thus, 97 percent of the birds are being illegally confined and the USDA has refused to take action. Their failure to do so is economically injuring the majority of law-abiding and ethical organic farmers.”

While the largest conventional egg industry players are fighting the new rule because it will disallow porches, more moderate-sized operators who typically keep around 20,000 birds to a building (as well as the Organic Trade Association) are delighted and pushing for implementation. ​“Two square feet of space, without adequate doors, and accompanying regulations that would actually encourage the birds to go outside, will do nothing to change current industry practices that result in the confinement of the vast majority of organic chickens,” says Burcham. ​“The proposal for 2 ft² outdoors and 1−1.5 ft² indoors, depending on the building design, will encourage business as usual for moderate-sized operations while seriously disrupting their factory farm competitors.” Due to lack of enforcement by the USDA, Cornucopia has produced research reports and associated brand scorecards, including one for organic eggs. The scorecards help eaters identify farms and companies that are adhering to both the spirit and the letter of the law, but many of the identified operations go well beyond the regulations.

“Whether this rule is implemented or not, we will not be changing our practices at World’s Best Eggs,” says Cameron Molberg, an organic egg producer from Elgin, Texas who has earned one of the top ratings on Cornucopia’s organic egg scorecard. World’s Best Eggs rotationally pastures 30,000 chickens in multiple mobile coops that are frequently moved to fresh grass. ​“We are already selling a product that is produced to standards far above what is currently required or proposed by the USDA,” says Molberg. ​“But if these rules go into effect, and/​or the USDA continues to fail to enforce the organic law, the real losers are the consumers who are hungry for authenticity and a better egg.”

(“Showdown at the Organic Corral” was originally published on Cornucopia News. An additional source of quotes critiquing the pending organic animal husbandry rule can be found at Cor​nu​copia​.org. Texas farmer Cameron Molberg is a former board member of the Texas Organic Farmers and Gardeners Association and was one of the country’s top rated egg farmers on The Cornucopia Institute’s scorecard, prior to his election to serve on the nonprofit’s board of directors.)

The Cornucopia Institute, a Wisconsin-based nonprofit farm policy research group, is dedicated to the fight for economic justice for the family-scale farming community. Their Organic Integrity Project acts as a corporate and governmental watchdog assuring that no compromises to the credibility of organic farming methods and the food it produces are made in the pursuit of profit.
Have thoughts or reactions to this or any other piece that you'd like to share? Send us a note with the Letter to the Editor form.
More articles by The Cornucopia Institute
Rural America
The National Organic Program Is Getting a New Boss, Here’s Why That’s Long Overdue
Rural America
Organics Watchdog to Federal Panel: Hydroponically Grown Food Fails to Meet Organic Standards
Rural America
Organic Industry Watchdog Calls USDA ‘Animal Welfare’ Rulemaking a Betrayal of Farmers and Consumers
Similar articles
Rural America
They Pick Food All Day, But Many Farmworkers Go to Sleep Hungry
Immigrant farmworkers in the U.S. often live in food deserts without access to the fruits and vegetables they spend their days harvesting.
Astra Lincoln
ViewpointRural America
Dear Congress: Say No to Water Privatization in the Infrastructure Bill
Water costs have soared in recent years as federal funding for water infrastructure has shrunk. Privatization is the last thing we need.
Rural America In These Times
Rural America
Remembering Charley Pride — and Country Music’s Long-Obscured Black Roots
Pride stood out as one of the very few Black superstars in a whitewashed genre.
﻿Liam Kennedy
Join our newsletter
Fearless journalism, emailed straight to you.
Subscribe and Save 59%