According to a plan released last week by Agriculture Secretary Sonny Perdue, in its first reorganization in over two decades, the U.S. Department of Agriculture (USDA) stands to lose one of its core Mission Areas: Rural Development.

The Department’s restructuring is the result of a congressional directive included in the 2014 Farm Bill, which instructed USDA to create a new Undersecretary of Trade. In addition to creating the new undersecretary position, USDA has also elected to demote the Rural Development Mission Area to the status of ​“office,” and shift the Natural Resources Conservation Service (NRCS), Farm Services Agency (FSA), and Risk Management Agency (RMA) from two unique Mission Areas (each with their own undersecretary) to a single ​“Farm Production and Conservation” Mission Area.

While the Administration has attempted to spin the demotion of Rural Development (RD) as an ​“elevation” — arguing that because the office would report directly to the Secretary, rural development needs would receive greater attention — it is in fact a trading away of rural, domestic priorities in favor of boosting international trade.

All undersecretaries, including the Undersecretary of Rural Development, already report directly to the Secretary, so the assertion that this would be a new benefit of RD’s re-categorization is misleading. In its current position as a core USDA Mission Area overseen by an undersecretary, RD is part of the USDA subcabinet; the reassignment of RD to ​“office” would remove it from the subcabinet and rescind the decision-making power that comes with being a USDA Mission Area. 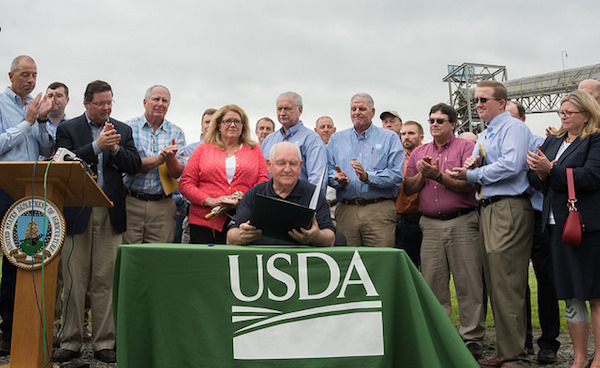 May 11, 2017 — USDA Secretary Sonny Perdue announces and signs the order signifying the creation of an undersecretary for trade and foreign agricultural affairs. (Photo: USDA)

Moreover, the Rural Development Mission Area is made up of three agencies — Rural Business and Cooperative Service, Rural Housing Service, and Rural Utilities Service — all of which would be eliminated by the proposed reorganization. The RD Mission Area and its agencies deliver numerous grant and loan programs to rural American communities and make multiple complex decisions on a daily basis. To assume that a downgraded office with a limited number of staff and no high-ranking leadership will be better positioned to carry out the important tasks and decision-making currently done by RD is questionable at best.

Although Congress directed USDA to create a Trade Undersecretary, USDA was under no legal obligation to eliminate another Mission Area and undersecretary position to accomplish that directive. They therefore could have continued to serve rural development needs at the same level while simultaneously stepping up their focus on trade, but they chose not to do that.

The demotion of RD, taken together with the Administration’s recent attempt to wipe out rural business programs, water and sewer loans, and grants for rural communities through the appropriations process, sends a clear signal that the President does not understand the critical nature of rural development to the American economy.

The National Sustainable Agriculture Coalition (NSAC) is committed to working with our 118 member organizations, Senators and Representatives from across the country, and our allies in the rural and agricultural communities to reverse this misguided decision demoting the rural mission of USDA.

The reorganization also involves shifting NRCS, FSA, and RMA under a single Mission Area, Farm Production and Conservation. The success or failure of this shift will depend on the details. Without a full proposal detailing this part of the reorganization, it is difficult to say whether or not it will result in more effective outcomes for farmers and the environment.

It is quite possible, however, that this shift is the beginning of a longer-term effort to meet President Trump’s March 13 executive order, which directs the Office of Management and Budget (OMB) to propose a plan to eliminate ​“unnecessary agencies” and merge agency functions. The president’s budget preview, which proposed privatizing conservation technical assistance (the backbone of NRCS’ conservation work with farmers), adds credence to these concerns.

NSAC has long called for better coordination between USDA agencies, and has routinely provided detailed recommendations on ways to implement data sharing, collaboration, and evaluation. We agree that enhanced collaboration between NRCS, FSA, and RMA would be helpful, but also underscore that each of these three agencies provides critical and unique services and programs. Given the connected but unique nature of each agency NSAC urges USDA to ensure that any changes made through the reorganization strengthen, not weaken or eliminate, their work. NSAC will oppose any long-term effort to eliminate NRCS functions and field offices as part of a broader reorganization effort.

Trump budget and House and Senate hearings to follow

The May 11 announcement by Secretary Perdue provided no new information on the administration’s upcoming budget request for fiscal year (FY) 2018, which OMB plans to release the week of May 22. NSAC expects that request will include further details about the Administration’s plans to eliminate rural development programs and privatize conservation planning, among other proposals.

It is our hope that both the authorizing and appropriations committees defend the need for USDA to be involved in promoting rural jobs and community development. The Committees can best make this stand by refusing to appropriate funds to allow the elimination of RD as a core Mission Area. Trading away rural America is wrong. Congress has the power to stop it; we hope they make the right choice.

The National Sustainable Agriculture Coalition is a grassroots alliance that advocates for federal policy reform supporting the long-term social, economic, and environmental sustainability of agriculture, natural resources and rural communities.
Have thoughts or reactions to this or any other piece that you'd like to share? Send us a note with the Letter to the Editor form.
More articles by National Sustainable Agriculture Coalition
Rural America
No Home on the Range for Grass Fed Beef: “Confusion and Subterfuge in the Marketplace”
Similar articles
2022 MidtermsCover StoryFeatureRural America
The Rural Vote Is Again in Play
The midterms showed that rural voters must be an integral part of the Democratic strategy if they want to win in 2024.
George Goehl
Rural America
The Curious Case of Carter County: How a Small Town in Montana Stopped Shrinking
On the Great Plains, these days, rural towns tend to wither. But in remote eastern Montana, one community is bucking that trend. How?
Eric Dietrich
Rural America
Study: “Salmon Remain on the Brink of Extinction. And Time Is Running Out.”
Between dams and warming waters, West Coast populations of wild salmon have plunged by 98%. What will it take to stop the decline?
Tara Lohan
Join our newsletter
Fearless journalism, emailed straight to you.
Subscribe and Save 59%