Giving Up on Congress, Immigrant Workers Stage Wave of Protests

For the last five months, community and labor activists, most of them young, have sat down in front of buses carrying people to detention centers for deportation. In Tucson, they obstructed and chained themselves to Immigration and Customs Enforcement Agency (ICE) buses. In San Francisco, a month after blocking a bus carrying deportees to detention, ​“Dreamer” Ju Hong — a young immigrant whose deportation was deferred in the White House’s executive action two years ago — challenged President Obama during a local speech. ​“You have the power to stop deportation,” the protester told him.

In response to these actions and others like them, the cities of Los Angeles and San Francisco have passed resolutions demanding a moratorium on deportations; San Francisco is imposing a halt in immigration-related firings as well.

And the pressure is only intensifying. Last week, unions and community organizations closed down an intersection in front of a Silicon Valley supermarket chain where hundreds were fired after an I-9 audit: an ICE inspection of company personnel records, intended to identify undocumented workers for termination. The next day, immigrant workers in one San Leandro, Calif. recycling facility walked out of work when their employer and ICE threatened their jobs in a similar audit.

These protests are a direct response to the deportations and firing that have intensified as a result of the Obama administration’s immigration enforcement policies. Over the last five years, thousands of workers have been fired through immigration audits and the use of the E-Verify database. In the same period, about 400,000 people have been deported every year — totaling almost two million. Special federal courts, called ​“Operation Streamline,” convene daily, passing quick judgment on the migrants led into the courtroom in chains, and sending them to prison, jail or privately run ​“detention centers.” More than 300,000 people each year spend some time in these immigration prisons.

In Washington, D.C., some organizations have continued to pressure Congress to take a vote on the Comprehensive Immigration Reform legislation (S. 744 and H.R. 15). But the actions in the streets hardly mention the bills. Some grassroots groups no longer support them at all, because they contain increased enforcement measures that would make firings and deportations even more widespread than they already are.

In fact, many community organizations and unions outside of the country’s capital have largely abandoned the idea that Congress can or will pass any laws that would end mass deportations and safeguard the jobs and labor rights of immigrant workers.

These grassroots protesters instead want the Obama administration to immediately use its executive authority to stop deportations and firings, without waiting for Congress. Even beltway groups like the National Council of La Raza, which until recently insisted that the CIR bills were the only way forward, have demanded an end to mass deportations.

At a rally to support the strikers in San Leandro, worker Ampara Romo appealed to supporters, saying, ​“I ask everyone to try to change the laws being used against us right now, because they are unjust and cause so much harm to families and our community in general.” When the recycling workers went on strike to protest firings, they were calling for the right to live as equals, as full participants in society, and to work without fear.

The unions and groups supporting them — as well as those around the country — seek an immigration reform that rises from locally based actions and advances toward equality. They reject the reforms in Congress because they create a second-class tier of people with fewer rights who are subject to ferocious enforcement. These photographs show the determination and courage of immigrant workers, their families and allies — going on strike against the prospect of losing their jobs, sitting down in the street in civil disobedience, and demanding a radical change in immigration policy. 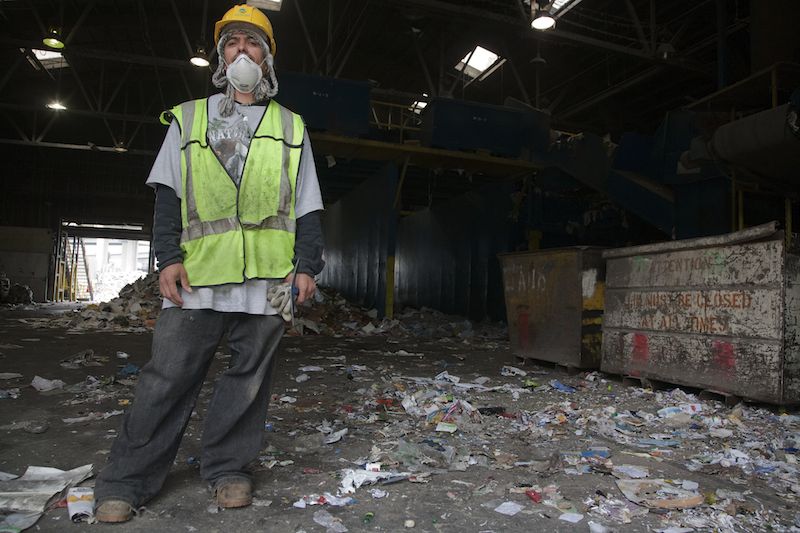 OAKLAND, CALIF. — Jamie Herrera is a worker at a recycling facility in Oakland, where employees went on strike on July 30, 2013 to protest bad wages, unsafe working conditions and ICE audits. Previously, Herrera had been a skilled union worker at a local foundry. He lost his job there because of an earlier I-9 audit; the Department of Homeland Security accused him of lacking legal status and forced his employer to fire him. 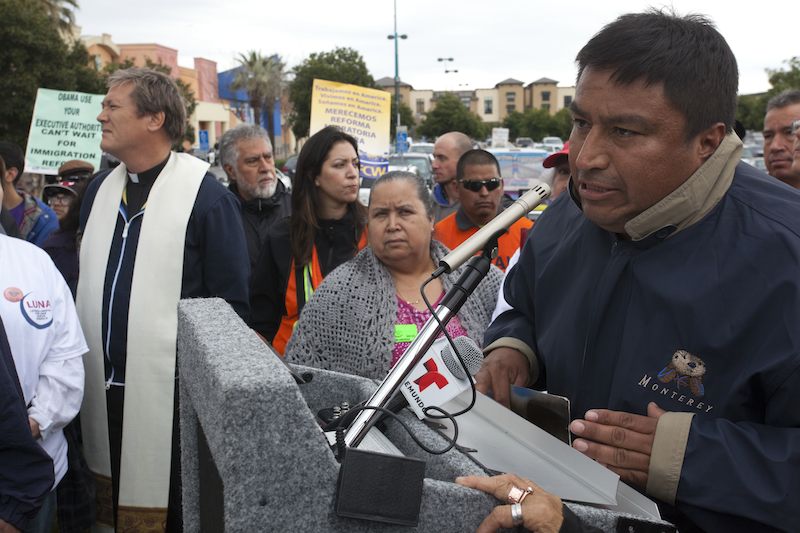 EAST PALO ALTO, CALIF. — Rogelio Marquez was fired from the Mi Pueblo Latino supermarket chain in last year’s massive I-9 audit. According to employees, Mi Pueblo used the audit and DHS immigration enforcement actions as a means to terrorize its workers when they began to organize a union. On Feb. 26, 2014, Marquez speaks in front of the Mi Pueblo market in East Palo Alto at the start of a rally demanding a moratorium on deportations and firings. 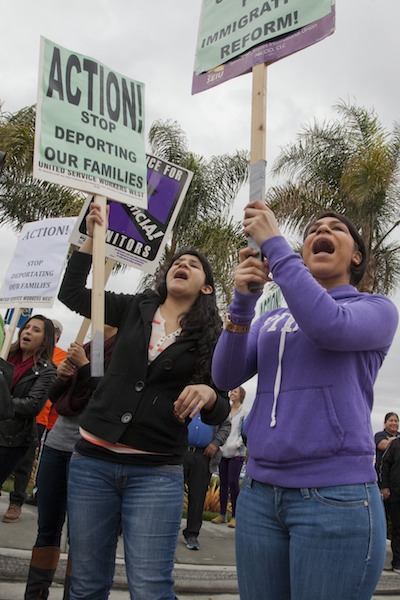 EAST PALO ALTO, CALIF. — The assembled crowd of community members and students at Mi Pueblo includes many who received temporary legal status when President Obama granted it to the Dreamers in an executive order in 2012. They demand this program of ​“deferred action” be extended to their families, as part of a broader moratorium on deportations. 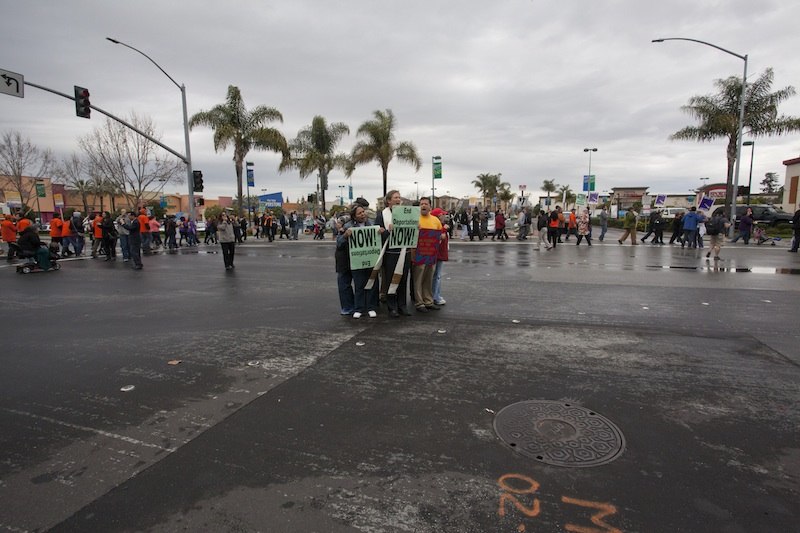 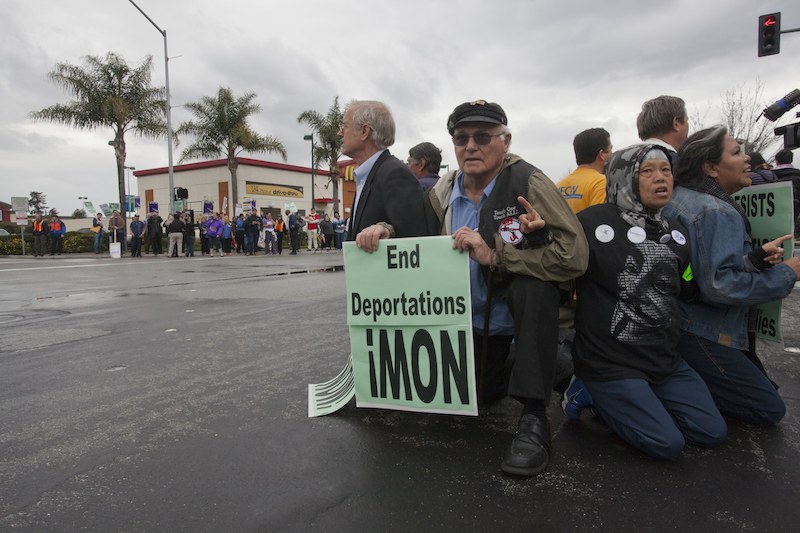 EAST PALO ALTO, CALIF. — In an act of civil disobedience, Silicon Valley immigrant rights activists, including labor organizers Fred Hirsch and Gerardo Dominguez, and Father Jon Pedigo, sit down in the middle of an intersection. Community sympathy for the demonstrators is so strong that the police eventually decided not to arrest anyone. 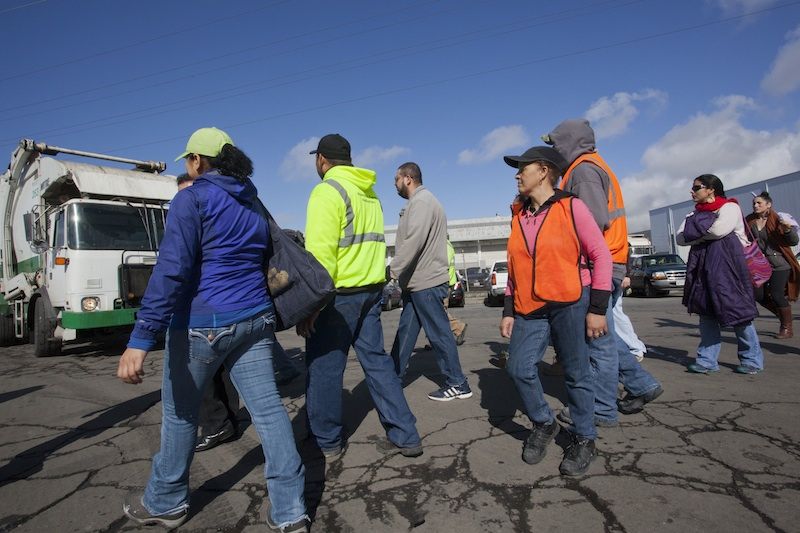 SAN LEANDRO, CALIF. — On Feb. 27. 2014, workers at a recycling facility walk out to protest the company’s decision to fire employees accused of not having legal immigration status. They also blocked trucks hauling trash from entering the facility. Workers say the company was paying $8.30 an hour; San Leandro’s living wage ordinance requires $14.17. After five employees filed a suit over the wage theft, they say, the company used the threat of immigration enforcement to retaliate. Maria Granados, one of the suing workers, points out, ​“One month after we sued them they started calling people into the office to say there were problems with our documents. Some of us have been there 14 years, so why now?” 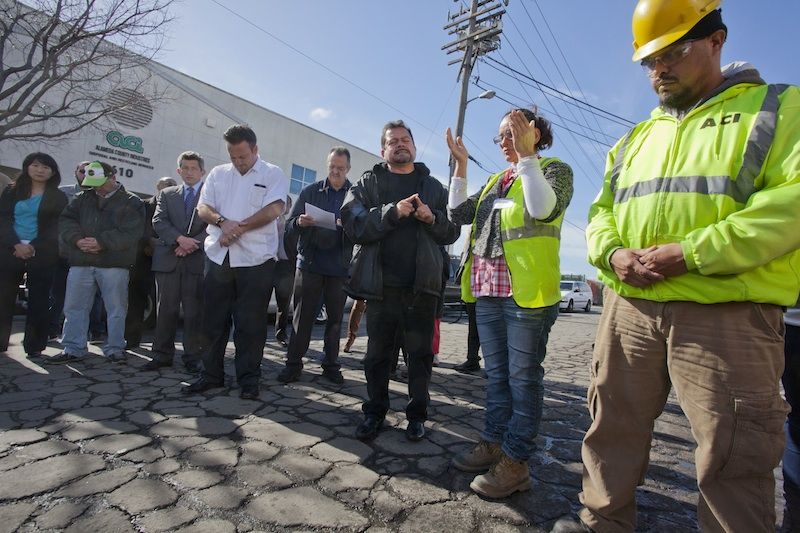 SAN LEANDRO, CALIF. — The striking immigrant recycling workers are supported by community leaders from a dozen organizations and unions. Although the employees had no union contract, they were assisted in the strike by the International Longshore and Warehouse Union Local 6 and ILWU organizer Agustin Ramirez. According to the workers, the temp agency that employs them threatened to fire anyone who participated in the walkout, but the workers demanded the agency respect their right to strike. 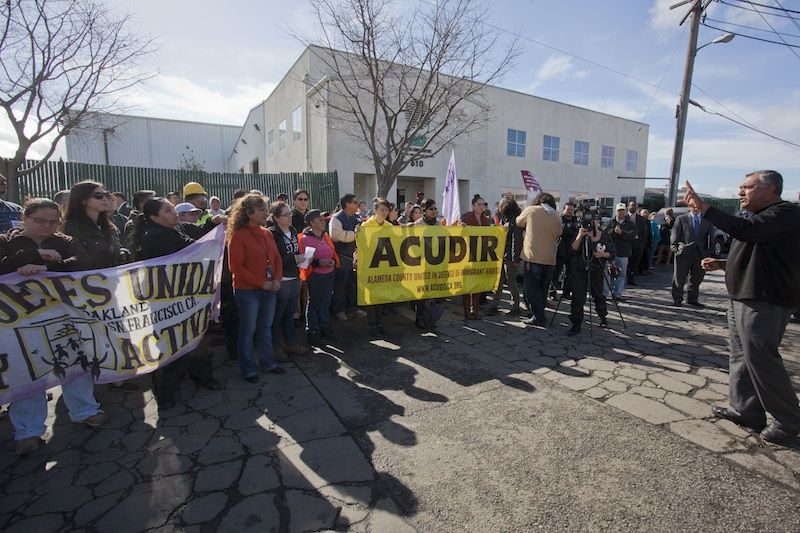 SAN LEANDRO, CALIF. — Rev. Pablo Morataya leads workers in a prayer to give them courage during the strike. A bus carrying fasters from the national Fast for Families campaign stopped at the strike to join them. The fasters, who are leading a charge to demand a moratorium on deportations, spoke at the rally about the importance of stopping the firings; in turn, the workers demanded a moratorium on deportations as well. 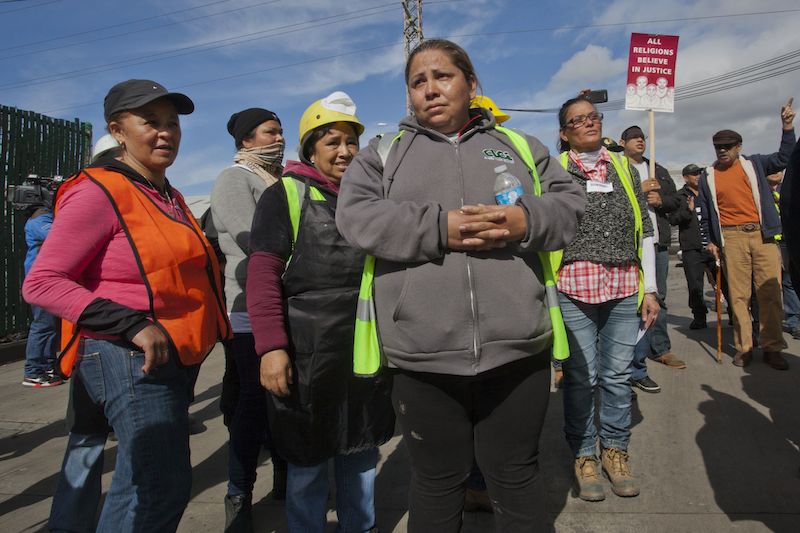 SAN LEANDRO, CALIF. — Workers and supporters stand blocking the company driveway. After an hour, the company sent them home, but agreed to pay them for the day and allowed them to go back to work the following day. The next week, however, organizers say the workers listed as undocumented in the I-9 audit were all fired.

David Bacon is a writer, photographer and former union organizer. He is the author of The Right to Stay Home: How US Policy Drives Mexican Migration (2013), Illegal People: How Globalization Creates Migration and Criminalizes Immigrants (2008), Communities Without Borders (2006), and The Children of NAFTA: Labor Wars on the US/​Mexico Border (2004). His website is at dba​con​.igc​.org.
Have thoughts or reactions to this or any other piece that you'd like to share? Send us a note with the Letter to the Editor form.
More articles by David Bacon
Labor
Hundreds of Fruit Packing Workers Are On Strike
Labor
Don’t Punish the Dreamers—Punish the Corporations Driving Forced Migration
Labor
40,000 AT&T Workers Begin 3-Day Strike
Similar articles
Labor
Chicago Teachers Didn’t Win Everything, But They’ve Transformed the City—And the Labor Movement
Rebecca Burns
Labor
The Answer To Burnout At Work Isn’t “Self-Care”—It’s Unionizing
Kayla Blado
Labor
Obama’s Free-Trade Victory Threatens 2012 Prospects
Roger Bybee
Join our newsletter
Fearless journalism, emailed straight to you.
Subscribe and Save 66%