White Supremacist Violence Is All Too American

Whenever Black Americans make advances, they face a torrent of racist backlash.

Real Americans understand that our nation is built around values,” wrote New York Times columnist Paul Krugman following the deadly right-wing violence in Charlottesville, Va. ​“These days we have a president who is really, truly, deeply un-American, someone who doesn’t share the values and ideals that made this country special.”

Make no mistake: The resurgence of armed white supremacist groups is exceedingly dangerous. Donald Trump’s refusal to unequivocally condemn them perhaps even more so. But what does it mean to call these behaviors un-American?

Studying U.S. history means coming to terms with right-wing terrorism as a feature, not a fluke, of the American experience.

This violence often surges at moments when American values and ideals are most hotly contested. Consider an editorial by Ku Klux Klan (KKK) Imperial Wizard Hiram Evans in 1925, when immigration and civil rights were front-page news. ​“Within a few years, the America of our fathers will either be saved or lost,” Evans wrote in the mainstream magazine The Forum. ​“All who wish to see it saved must work with us.” This echoes the chants of torch-bearing marchers in Charlottesville: ​“You will not replace us.”

Conversely, the unfulfilled promise in the American ideal of ​“liberty and justice for all” has given birth to many movements determined to win its fullest possible expression. For every theoretician of ​“race science” or proponent of ​“separate but equal,” we will find abolitionists and civil rights activists. These two forces are the yin and yang of the American spirit. At our core, we are a nation still struggling over wildly different interpretations of American values. Simply stating that the events in Charlottesville and Trump’s response are ​“un-American” risks the impression that this battle has already been won.

Here, I consider four key periods when rightwing violence helped derail civil rights gains. The lesson is sobering: Any successful liberation movement is likely to encounter right-wing backlash. The battle between America’s anti-racist ideals and its racist id continues. Beyond disavowing the latter, we must continue the fight for the former. 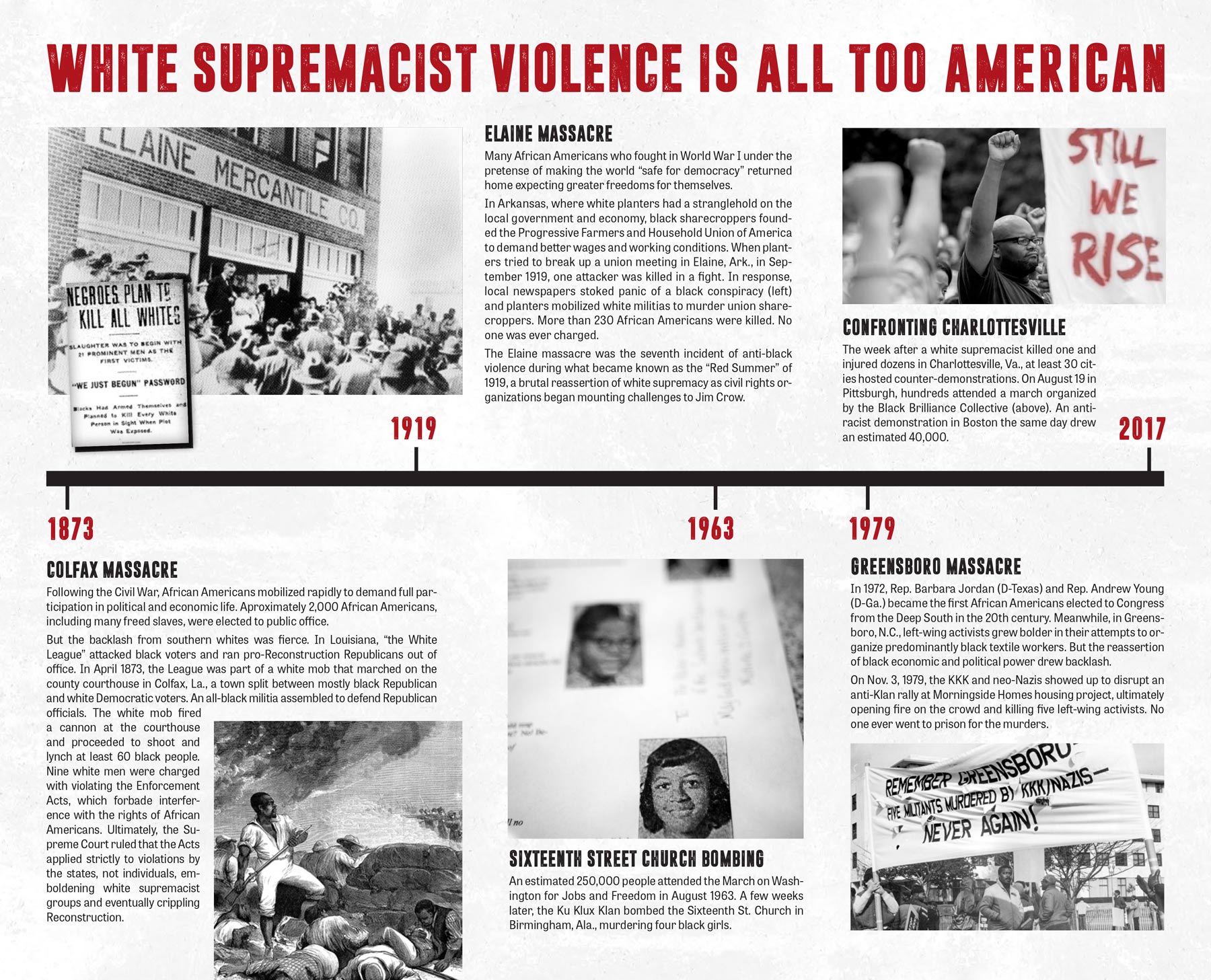 But the backlash from southern whites was fierce. In Louisiana, ​“the White League” attacked black voters and ran pro-Reconstruction Republicans out of office. In April 1873, the League was part of a white mob that marched on the county courthouse in Colfax, La., a town split between mostly black Republican and white Democratic voters. An all-black militia assembled to defend Republican officials. The white mob fired a cannon at the courthouse and proceeded to shoot and lynch at least 60 black people. Nine white men were charged with violating the Enforcement Acts, which forbade interference with the rights of African Americans. Ultimately, the Supreme Court ruled that the Acts applied strictly to violations by the states, not individuals, emboldening white supremacist groups and eventually crippling Reconstruction.

Many African Americans who fought in World War I under the pretense of making the world ​“safe for democracy” returned home expecting greater freedoms for themselves.

In Arkansas, where white planters had a stranglehold on the local government and economy, black sharecroppers founded the Progressive Farmers and Household Union of America to demand better wages and working conditions. When planters tried to break up a union meeting in Elaine, Ark., in September 1919, one attacker was killed in a fight. In response, local newspapers stoked panic of a black conspiracy and planters mobilized white militias to murder union sharecroppers. More than 230 African Americans were killed. No one was ever charged.

The Elaine massacre was the seventh incident of anti-black violence during what became known as the ​“Red Summer” of 1919, a brutal reassertion of white supremacy as civil rights organizations began mounting challenges to Jim Crow.

An estimated 250,000 people attended the March on Washington for Jobs and Freedom in August 1963. A few weeks later, the Ku Klux Klan bombed the Sixteenth St. Church in Birmingham, Ala., murdering four black girls.

On Nov. 3, 1979, the KKK and neo-Nazis showed up to disrupt an anti-Klan rally at Morningside Homes housing project, ultimately opening fire on the crowd and killing five left-wing activists. No one ever went to prison for the murders.

The week after a white supremacist killed one and injured dozens in Charlottesville, Va., at least 30 cities hosted counter-demonstrations. On August 19 in Pittsburgh, hundreds attended a march organized by the Black Brilliance Collective. An antiracist demonstration in Boston the same day drew 1919 an estimated 40,000.

Robert Greene II is a Ph.D. candidate in history at the University of South Carolina and the book review editor for the Society for U.S. Intellectual History. His writing has appeared in outlets including Dissent, Politico and Scalawag.
Have thoughts or reactions to this or any other piece that you'd like to share? Send us a note with the Letter to the Editor form.
Similar articles
Feature
Bill Moyers: Instead of Rebuilding America, Trump Bombs the Middle East
After Trump unleashed missiles on a Syrian airfield, members of Washington’s national security establishment and elite pundits swooned.
Bill Moyers
Feature
Media Forecast is Hazy
Patricia Aufderheide
Feature
Biodiversity Inc.
Mexico tries a new tactic against Chiapas rebels: conservation
Bill Weinberg
Join our newsletter
Fearless journalism, emailed straight to you.
Subscribe and Save 59%