Most human endeavours, unless checked by public dissent, evolve into monocultures. Money seeks out a region’s comparative advantage — the field in which it competes most successfully — and promotes it to the exclusion of all else. Every landscape or seascape, if this process is loosed, performs just one function.

This greatly taxes the natural world. An aquifer might contain enough water to allow some farmers to grow alfalfa, but perhaps not all of them. A loch or bay or fjord might have room for wild salmon and a few salmon farms, but if too many cages are built, the parasites that infest them will overwhelm the wild fish. Many farmland birds can survive in a mixed landscape of pasture and arable crops, hedgerows and woodlands, but not in a boundless field of wheat or soybeans.

Some enthusiasts for rewilding see reserves of self-willed land as an exchange for featureless monocultures elsewhere. I believe that pockets of wild land — small in some places, large in others — should be accessible to everyone: no one should have to travel far to seek refuge from the ordered world. While I would argue against a mass rewilding of high-grade farmland, because of the threat this could present to global food supplies, we lose little by allowing nature to persist in small fallow corners and unexploited pockets of even the most fertile places.

The drive towards monoculture causes a dewilding, of both places and people. It strips the Earth of the diversity of life and natural structure to which human beings are drawn. It creates a dull world, a flat world, a world lacking in colour and variety, which enhances ecological boredom, narrows the scope of our lives, limits the range of our engagement with nature, pushes us towards a monoculture of the spirit.

I doubt that anyone wants this to happen to the land that surrounds them, except those — a small number — who make their money this way. But these few have been empowered both by their ownership of the land and by a kind of cultural cringe that prevents other people from challenging them. The Italian philosopher Antonio Gramsci used the term ​“cultural hegemony” to describe the way in which ideas and concepts which benefit a dominant class are universalized. They become norms, adopted whole and unexamined, which shape our thinking. Perhaps we suffer from agricultural hegemony: what is deemed to be good for farmers or landowners is deemed, without question or challenge, to be good for everyone.

In some cases we pay to support this hegemony and the monocultures it creates. Scores of billions of pounds of public money are spent each year to sustain the degradation of the natural world. In the United States, farm subsidies encourage the unvaried planting, across vast acreages, of corn. In Canada, subsidies for pulp and paper mills help to replace ancient forests with uniform plantations. Worse, perhaps, from the point of view of rewilding, is public spending, which sustains monocultures in places that would otherwise be reclaimed by nature. This is what happens in the nation I am using as a case study of the monomania that blights many parts of the world.

Subsidies are not the only means by which we pay for grazing in the hills. 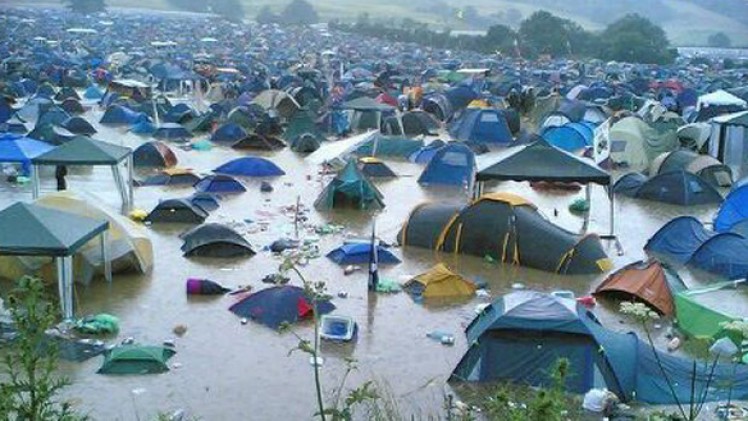 In July 2012, despite severe flooding, Wakestock — a wakboarding and music festival in North Wales — went ahead as planned. (http://​www​.the​week​.co​.uk)

In England and Wales, floods cause around £1.25 billion of damage a year. Protecting land and homes from possible impacts costs a further £570 million a year. The immediate reason for the summer floods that struck the region in which I live in 2012, flushing through houses, forcing the evacuation of the village of Pennal and the rescue by helicopter and lifeboat of campers and caravanners on the coast, drowning roads, railways and the electricity substation, was an Atlantic gale that dumped a very heavy load of rain on the hills. But the floods must have been exacerbated — and might have been caused — by the reduced capacity of the hills to absorb this rain. Instead of percolating away slowly, it now sluices almost immediately into the valleys.

I am told by a senior civil servant that an insurance company recently investigated the possibility of buying and reforesting Pumlumon — the largest mountain in the Cambrians, on whose slopes both the Severn and the Wye arise. It had worked out that this would be cheaper than paying out for carpets in Gloucester. It abandoned the plan because of the likely political difficulties.

Strong as the case for change may be, agricultural hegemony is so potent that to challenge farmers and landowners is almost taboo. In Wales, farmers (both full- and part-time) account for 1.5 percent of the total population and 5 percent of the population of the countryside: 44,000 out of 960,000 rural people. Yet the countryside is governed and managed almost exclusively for their benefit. Many of the ideas and perspectives that dominate rural policy arise with farmers’ unions, which are often governed by the biggest and richest landowners. The views of the majority of rural people who are not farmers — 95 per cent in Wales — are marginalized. Elin Jones was minister for rural affairs, not minister for farming, but the pen she brought to our discussion was a cipher for her department’s policies. Rural politics throughout Europe and in much of North America suffers from the same blight: their primary purpose appears to be to keep the farmers (or foresters or fisherfolk) happy, though everywhere they are a small minority.

I am convinced that this can change, that if people were more aware of how their money is being used, the needless destruction, the monomania, driven by farm subsidies — across Europe and in several other parts of the world — would come to an end. This, more than any other measure, would permit the trees to grow, bring the songbirds back, prompt the gradual recolonization of nature, release the ecological processes that have been suppressed for so long. In other words, it would allow a partial rewilding of the land.

See the options
George Monbiot is one of the world’s most influential radical thinkers. His Guardian columns, celebrated for both their originality and the depth of their research, are syndicated all over the world. Monbiot is the author of the bestselling books Captive State, The Age of Consent, Bring on the Apocalypse and Heat as well as the investigative travel books Poisoned Arrows, Amazon Watershed, and No Man’s Land. Among the many prizes he has won is the UN Global 500 award for outstanding environmental achievement, presented to him by Nelson Mandela.
Have thoughts or reactions to this or any other piece that you'd like to share? Send us a note with the Letter to the Editor form.
Similar articles
Rural America
A New Law Promised Debt Relief for Black Farmers. Instead, Some Got Collection Notices.
The American Rescue Plan included $4 billion in debt relief for farmers of color, but a lawsuit has thrown the program, and the farmers who need it, into limbo.
April Simpson
Rural America
How Cuts to Unemployment Benefits Will Hurt Rural People
Republican governors in at least 22 states are ending federal unemployment assistance. The cuts will hit hard in rural areas and communities of color.
Aallyah Wright
Rural America
Regrowing Indigenous Agriculture Could Nourish People, Cultures and the Land
European settlement, government policies and monoculture have nearly eradicated Native American farming practices. A growing movement is reclaiming them.
Christina Gish Hill
Join our newsletter
Fearless journalism, emailed straight to you.
Subscribe and Save 66%