Standing beside Marea outside the paddock where the horses lived, I watched them eat hungrily while she reached into her coat pocket and pulled out a bag of tobacco. Her hands shook with cold as she got out a rolling paper, folded it, filled it with loose brown leaves, and shaped a cigarette. Her wool coat sported mode-of-the-day patches, and the round, vintage vamps of her secondhand boots took her a step beyond the fashion-fringy work boots worn by the jeans jacket gang and many other young feminists around the Twin Cities. I couldn’t help but notice how her pale skin stretched across the slender bones of her fingers, making her hands look delicate and vulnerable in the winter light. I felt like someone ought to help her warm them up. I had a powerful urge to be that someone, but I kept my mouth shut and my hands to myself.

Once the horses had finished their grain, they started a stylized ritual over the empty feed tubs. I’d seen them do it many times and had the impression that horses had been doing something like it for 50 million years or so, since their primordial ancestor Eohippus roamed the forest. Pretty soon, the big, half-bred workhorse Dick asserted his dominance by squealing, turning his butt, and flexing a meaty hind leg. The rest shook their heads and snorted disapproval, but no one challenged him.

“Grab the pans,” Marea ordered with comic urgency, streaming smoke from her nostrils and looking exaggeratedly hassled for my entertainment.

Our life at Haidiya Farm felt highly entertaining at times, and like life at Cushing, Minn., it conjured an era before indoor plumbing and the electrical grid. Mostly I liked that about it and often thought I should have been born to the early 20th century instead of the frenzied, stressed-out, atomic second half of it. I’ve always sought quiet and solace in nature. Even as a little girl, I went alone to wild spaces: the woods along the river near my grandparents’ home, a slough of grass and brush near our house, and the knobby prairie hills that rose around Minot, N.D., from the river valley. I slipped away to those hills as often as I could. In spring, I found wild crocus and cactus amid patches of snow, and I learned that if you settled into a little depression, protected from the wind, you could stay warmed by the sun and watch the clouds shifting shapes while time melted toward oblivion.

At Haidiya Farm, I rediscovered the feral self I had nearly lost in the Twin Cities. In the evenings we sat around the woodstove in the living room, reading, talking, and smoking green and pungent homegrown weed. We shared books, and we all read. When we got excited about a writer like Mary Renault or Laura Ingalls Wilder, we binge-read collectively and talked about what we learned about farm skills, collective living experiments, classical history, feminism, spirituality, and writing. Marea told me how much she admired the activist philosophers Helen and Scott Nearing for living intentionally simple lives and sharing their Forest Farm gardens, produce, and buildings with like-minded others. She said they’d found that four hours of ​“bread labor” (gardening, gathering, construction, machinery maintenance, etc.) was enough to pay a person’s way and keep the farm going. That sounded good to me. I thought we could do it too.

At times, we functioned like a study group, at other times like loving, supportive friends, or like a bickering collective of radical feminists whose lifeblood was criticism. Living with women on the land felt like it could be everything I’d hoped — an antidote to patriarchy, the war machine, wasteful consumption, and the destruction of the Earth.

One morning, when I came in the back door after chores, I smelled a nutty aroma mixed with wood smoke. I found Shirley at the stove, stirring grains in a cast-iron frying pan. She had cracked corn, barley, and wheat berries in the grinding mill and was roasting them. Afterward, she planned to add water and salt and let the cereal boil until it was soft. My appetite spiked while I smelled the porridge boiling. When we dished up, we added spoonsful of Martha and Marea’s stiff, raw honey. It melted into the hot cereal like butter, and later, after Martha bought her little black cow, Beauty, we would add some of Beauty’s milk or butter that we had made from her cream.

“My god, this is good,” I said about the porridge. ​“I know,” Summer said, digging in. Some days we had eggs from the Haidiya Farm hens, or bread that we baked from hand-ground flour. Martha sometimes made cream-top yogurt, letting Beauty’s rich, whole milk ferment with yogurt starter in a gallon jar atop the warming oven of the cook-stove. I remember seeing five or six inches of cream at the top of a gallon of yogurt. When we needed butter, Martha let the cream rise on fresh milk. We skimmed it off and took turns cranking the Dazey churn. The children, Sara and Trent, ate the same food we did, and we all thrived. I don’t remember anyone complaining, though decades later Molly confided that when she visited us, she found the food ​“too grainy.” Once, she said, she and a friend from college drove a half-hour or so to Ladysmith to get hamburgers.

I remember tears, illnesses, and temper are-ups. These things happened with three-year-olds — and also with women in our twenties. Our periods synced up, hormones raged, and we had some rough times. Molly now reminds me that during that time she came for a visit once and found a note from us, telling her that we’d ridden our horses to the neighborhood bar and she ought to hop on Shirley’s pony, Raffire, and join us. She tried. The excitable young gelding shied and dumped her at the bridge that crossed the Yellow River a quarter-mile or so down the road. She walked back to the house with an aching back and decided to churn some butter. She put milk in the churn instead of cream, so she cranked the handle for a long time and nothing congealed. When we got home, we laughed at her for not knowing better.

One afternoon, Marea and I went for a miles-long ride. The sun started setting as we looped around a snowy trail through a swamp. She cantered White Mare, and Dick kept us close on her heels. I felt the muscles of my legs start to ache and then turn to rubber, and he let out a string of groaning complaints. Near the road where we had found the trailhead, Marea turned around to see where we were. She said, with surprise in her voice, ​“Oh, you’re right behind us!”

Yes, we were. Dick had grit and heart. Later, I read that the magical herb Lurk-in-the-Ditch (after which Marea had nick-named him) is said to impart strength. Not long after our challenging ride — possibly even the next morning — Martha said to me, ​“We’ve been talking, and we figure that all the use you’re putting Dick to is either going to kill him or get him into shape.”

“Let’s hope it gets him into shape,” I told her while my thighs and butt sang a whiny little song of woe to me alone.

“I’ll do it,” I said without a second thought. I was operating on modest savings, but my expenses had been small since I moved to Haidiya Farm. I could buy my share of groceries and Blitz’s dog food, and I figured that I could afford to feed Dick, too. The next thing I knew, Martha and Marea were boarding another horse that they no longer owned themselves, and I was feeling my way into a stray attraction to a cranky old gelding. I hoped he would live a long time and carry me far. 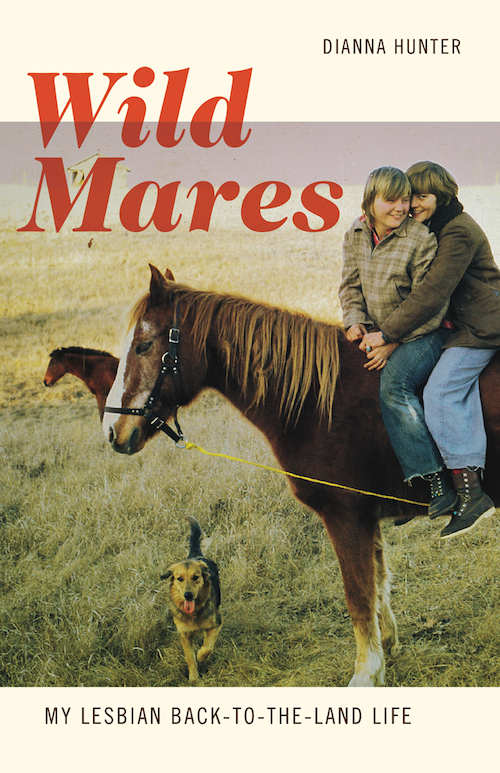 See the options
Dianna Hunter is author of the book and radio series Breaking Hard Ground: Stories of the Minnesota Farm Advocates. She taught writing and women’s and gender studies at four universities, including the University of Wisconsin – Superior, where she was a lecturer and director until she retired in 2012.
Have thoughts or reactions to this or any other piece that you'd like to share? Send us a note with the Letter to the Editor form.
Similar articles
Rural America
Does Lake Erie Deserve Legal Rights? A Federal Court Hears Arguments
Stacey Schmader
Rural America
Can the Corporate Takeover of Dairy Farms be Stopped?
John Ikerd
Rural America
In Less Than One Generation, We’ve Lost More Than 10 Million Acres of the Best U.S. Farmland
Rural America In These Times
Join our newsletter
Fearless journalism, emailed straight to you.
Subscribe and Save 66%