On May 24, tens of thousands of people descended on Brazil’s capital, Brasília, to protest the government of President Michel Temer and its proposed reforms that could gut workers’ rights and pensions.

Hundreds of buses arrived from around the country, filled with members of unions and social movements, such as the grassroots Landless Workers’ Movement, or MST, and the Popular Brasil Front.

Police and even the military — after Temer issued a controversial decree calling out the Armed Forces to protect the city — responded with brutal force, firing tear gas, rubber bullets and stun grenades, while Senators debated inside.

The action came less than a month after 35 million people participated in a General Strike April 28 , stopping public transportation, closing banks and schools, and grinding many cities to a halt.

At stake is the very fate of labor rights in Brazil. Under the new legislation, employees would be permitted to negotiate directly with their bosses, side stepping unions and collective bargaining. These negotiations would be allowed to supersede certain areas of the labor code, which critics say could render the foundation of Brazilian labor law obsolete: The reform could eliminate the 8-hour workday, open the door for businesses to side-step labor legislation and collective bargaining, end the mandatory payment of union dues and further facilitate outsourcing.

It has already passed in the lower house of congress, and on Tuesday was approved by the senate’s economic affairs committee (though it must first pass two other committees before it goes before the whole senate floor).

Many workers are afraid — and 46-year-old Marlei Chaves das Chagas is one of them.

For 21 years, Chagas has worked as the superintendent of the 5-story Spazzio Botticelli apartment complex in Florianópolis, Brazil.

As the protests raged in Brasília on Wednesday, she was busy running up and down the building’s stairs. She answered the door to curriers delivering packages, cleaned the halls and tried to assuage the anxiety of many of the 24 families in the building, who have been without water for several days, because of heavy rains the previous weekend.

“This is my home. I just go to my house to sleep,” she says. 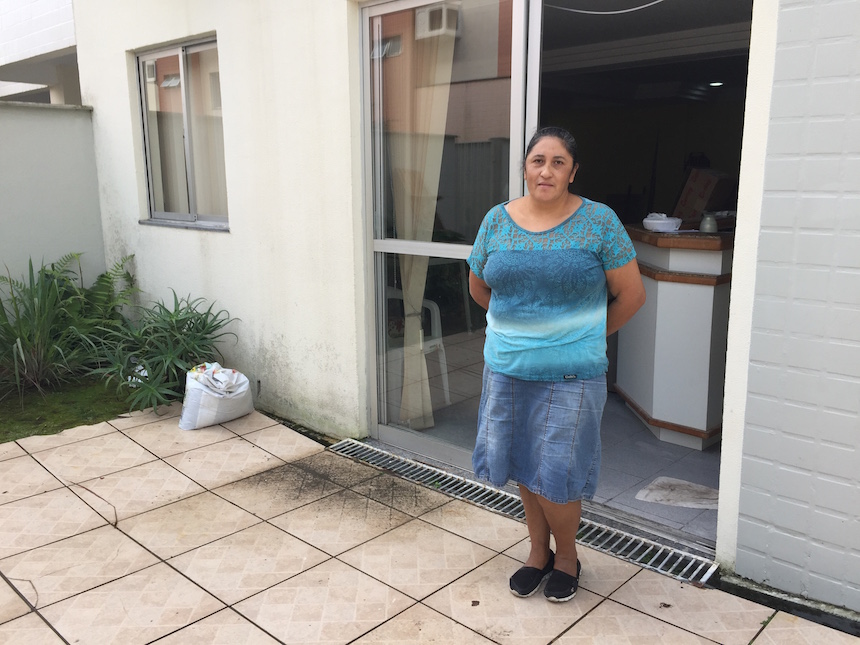 Chagas stands outside of the apartment complex where she works. (Photo by Michael Fox)

She is proud of it. Her job was enough to support herself and her three kids, even after she left an alcoholic husband.

“My life was here,” she says. ​“I raised my children here. I took care of my home and my kids with the money I made here.”

But if the reform passes, she believes that everything she has could come crumbling down around her, including her vacation pay, her yearly bonus, and even her job.

A neighboring apartment complex recently outsourced the administration of its building to a company that pays the woman in her position only minimum wage, roughly $300 a month, a little over half of what she makes. If they can do that without the reform, she figures, just imagine what they could do with it.

“This reform is there to take away the rights that we have achieved up until now. And with the signature of one pen, they can take that all away,” she says.

The reform’s proponents argue it’s the antidote to Brazil’s worst economic downturn since the Great Depression. Rising unemployment has tripled in five years, to nearly 14 percent. The bill, its backers say, is necessary to modernize the labor market and update the labor code for the new realities facing Brazil.

In a video posted online by the Tea Party-like Free Brazil Movement in April, with over 70,000 views, one of the movement leaders, Kim Kataguiri, responds to what he calls ​“the four biggest lies about the labor reform.” His answer to the first question is telling.

“Is it true that the labor reform takes away rights?”

“No,” he says. ​“Today, employee and employer are required to respect the Brazilian Labor Code.” But the reform, according to Kataguiri, would give ​“freedom to the worker, allowing him to define the conditions of his contract and not the government.”

Whether this amounts to freedom, however, is precisely what’s being contested.

“The rights will remain on the paper, but it will open the door for employers to impose the rules that they want,” said Rogério Manoel Corrêa, the president of SEEF, the union representing Florianópolis building employees, like Marlei. ​“The worker is going to have his hands tied. And he’s going to have to choose. Either he keeps his rights, or he keeps his job.”

According to Ana Julia Rodrigues, the president of the Santa Catarina state chapter of the country’s largest labor federation, the CUT, the current assault on labor rights — both from this proposed labor reform, and other legislation — in Brazil is unprecedented

“During the dictatorship [1964-1984] they took away our right to expression and freedom of expression, and the two-party system, but the attacks on the working class and workers’ rights over labor legislation were not as intense as they are today,” she said in April, at the CUT headquarters in Florianópolis. ​“Yes, they took away many rights, but not like today.”

The proposed labor reform is only the latest assault coming from the right-wing Temer government, which came to power just over a year ago in what many called a legislative coup. The Workers’ Party president Dilma Rousseff was suspended by the legislature in May 2016, and then impeached for carrying out maneuvers to balance the budget that are routine in Brazil, but which congress deemed illegal. Congress itself is one of the most conservative in memory, with substantial majorities in both houses of congress. The powerful ​“Bible, beef and bullets” caucus — which unites evangelicals, the agribusiness-backed farm lobby, and lawmakers looking for greater gun rights —holds over half the seats in the lower house alone.

On his first day in office, Temer turned his back on more than a decade of Workers’ Party policies aimed at poverty reduction and addressing inequality. He named an all-white male cabinet, rolled back social programs, such as the housing program Minha Casa, Minha Vida, and eliminated the ministries of human rights, racial equality, and women. Within months, he had embarked on a platform of shock reforms that cut funding for health and education, locked in a 20-year government spending freeze, and pushed privatizations, with plans to auction off mining and oil concessions and major infrastructure, including airports, ports, highways and power distribution plants.

In March, lawmakers approved the country’s first outsourcing law, which now permits the practice in all sectors, allows for the extension of temporary work contracts from three to nine months and makes it more difficult for contract workers to negotiate benefits. Congress is now debating a pension reform that would slash benefits and raise the retirement age for federal employees. All of this has been actively pushed by president Temer.

But his government has also been wrapped up in scandal. At least six of his cabinet members have had to step down, because of evidence or allegations of their involvement in Brazil’s ongoing Lava Jato corruption scheme, in which bribes were paid in exchange for lucrative government contracts. Another eight current cabinet members are now also under investigation.

Temer himself was hit with a bombshell in mid May, when audio was leaked by the head of Brazil’s largest meat exporter, JBS, in which Temer can be heard encouraging the payment of hush money to the former speaker of the Chamber of Deputies, Eduardo Cunha, who led the impeachment charge against Rousseff. The scandal has threatened to take down the president. Although he has refused to resign, over a dozen motions for impeachment have been submitted to congress and protesters have hit the streets in recent weeks calling for direct elections.

Many on the Left are hoping the political crisis can also stymie the labor reform.

But though the government is in turmoil and its labor reform is unpopular — as seen by the protests against it, and an online Senate poll — the bill is still afloat, driven by powerful interests, including lobbyist from banks, commerce, industry and transportation. Despite a tumultuous session in the senate finance committee hearing on May 23 that broke into a shouting match and nearly a brawl, the reform is moving forward and could be brought to the floor of the Senate in just a couple of weeks. It was already fast-tracked and approved by the lower house in April.

It’s no coincidence they’re in a hurry, a year and a half out from the 2018 presidential elections. Temer is already barred from running for office for the next seven years for receiving illegal campaign contributions. Former President and union leader Luiz Inacio Lula da Silva is, by far, the front runner in all of the polls. Temer and pro-business interests in Congress are looking to push through everything they can, particularly if it can weaken the union movement and the mobilizations in support of Lula’s candidacy.

But unions and social movements are not taking this legislative assault lying down. Workers are mobilizing daily in cities across the country, canvassing, holding forums and local actions. More marches are planned for the coming weeks, including another General Strike at the end of the month, one that could last multiple days.

“This reform would just finish off the life of the little guy,” says Chagas.

And it will, they’re afraid — unless ongoing grassroots mobilization can stop it.

“Michael Fox is a freelance reporter and video journalist based in Brazil. He is the former editor of the NACLA Report on the Americas and the author of two books on Latin America. He tweets at @mfox_us.
Have thoughts or reactions to this or any other piece that you'd like to share? Send us a note with the Letter to the Editor form.
More articles by Michael Fox
Feature
Bolsonaro Says Environmental NGOs Are Burning the Amazon. That Conspiracy Theory Has a Strange Past.
How a book published in 2001 fueled a dangerous right-wing narrative in Brazil.
Dispatch
Brazil’s Labor Unions Prepare for War with Far-Right President Jair Bolsanaro
Bolsanaro has lowered the minimum wage, dismantled labor law enforcement and is threatening pension cuts.
Feature
U.S. Invasion of Venezuela Would Be a Nightmare for Its People
Under the pretext of delivering aid, Trump is threatening to unleash military violence.
Similar articles
Labor
Contract for Disaster: How Privatization Is Killing the Public Sector
s.e. smith
Labor
Obama’s Deficit Reduction Commission Proposes Tax Breaks for Very Rich!
Roger Bybee
Labor
How to Restore the Power of Unions?
Joe Burns
Join our newsletter
Fearless journalism, emailed straight to you.
Subscribe and Save 59%