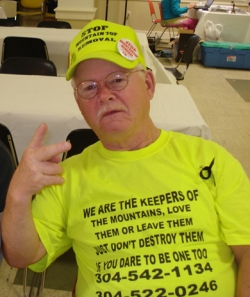 Larry Gibson, sporting his hat and t-shirt with the motto of Keeper of the Mountains: 'Love em or leave em; just don’t destroy em.'
(Photo by ILoveMountains.org / Flickr / Creative Commons)

The first time I saw Larry Gibson speak I cried. He was speaking at my university in West Virginia and it was raining and cold and not many people were in attendance. But by the time he was through, the entire room was touched by his stories about his fight to stop mountaintop removal (MTR) mining from destroying his ancestry and home on Kayford Mountain in Raleigh County, W.Va. He was the face of resistance to MTR in Appalachia. He died Sunday from a heart attack while working on his home on Kayford Mountain. He was 66.

I had lived my whole life in Appalachia, but had never lived near a mountaintop removal site. I knew about the practice of MTR. I knew that it was slowly decimating communities, poisoning well-water supplies, causing birth defects and increasing the risk of cancer for those who lived near mining sites. But I had never seen the faces or heard the voices of those who were adversely affected by MTR. Larry was that face and that voice for me, and for a lot of people both in Appalachia and the rest of the country.

The land on which Larry lived had been in his family for nearly 200 years. His family was buried there and he dedicated himself to preserving it. Coal companies had bought the land and mineral rights to the land all around his property.  MTR sites surrounded his plot—a patch of green amidst gray dust and mining equipment. He could have sold his 50 acres for a small fortune. The property he claimed was said to be worth $650 million to the mining industry. But he never sold his land; instead, he opened it up for tours to show people the MTR sites that surrounded him. He would not allow it to be wiped away for coal. His history was on Kayford and that is where he died on Sunday.

“When my dad passed away you could still smell the mountain air on him,” his daughter, Victoria, told a local newspaper in West Virginia. “You could still see the dirt underneath his nails and the stains on his hands. He was working. He lived his life devoted to the mountain.”

Larry toured the country and the world to tell people about the pillaging of the Appalachians through MTR. He founded Keepers of the Mountains in 2004, and it has become one of the major nonprofits dedicated to the fight against MTR. The saying for Larry and the group was simple: “Love em or leave em; just don’t destroy em.” Each time Larry made an appearance—whether it be at a middle school or CNN—he wore a neon green sweat shirt and matching hat with that motto printed on them.

One of his most recent appearances came in Chris Hedges and Joe Sacco’s new book, Days of Destruction, Days of Revolt. He gave the authors a tour of his property on Kayford Mountain, just like he had for hundreds of other visitors.

“Do you know what it’s like to hear a mountain get blowed up?” he asked Hedges and Sacco. “A mountain is a live vessel, man; it’s a life itself. You walk through the woods here and you’re gonna hear the critters moving, scampering around, that’s what a mountain is. Try to imagine what it would be like for a mountain when it’s getting blowed up, fifteen times a day, blowed up every day, what that mountain must feel like as far as pain, as life.”

Through his years of fighting against MTR, Larry faced opposition from miners afraid his activism endangered their jobs. His living quarters on Kayford had been vandalized. One of his trailers was littered with gun shots. Two of his dogs were shot. One dog was nearly hanged before he was able to rescue it. In 2007, one of his family cemeteries was bulldozed in front of him by Massey Energy operators while he was giving a tour of his property to visitors. Through this, he persisted and his resistance seemed to grow stronger, even as his health declined.

Larry was largely responsible for bringing MTR to the consciousness of hundreds of thousands of people within Appalachia and outside of it as well. He moved people through the stories he told and I feel fortunate to have heard them.

Larry is survived by his wife, Carol; two sons, Cameron and Larry Jr; and his daughter, Victoria. The family requests that those who wish to express condolences donate to Keepers of the Mountains.