‘Hands Up, Don’t Shoot’: A National Moment of Silence for Mike Brown 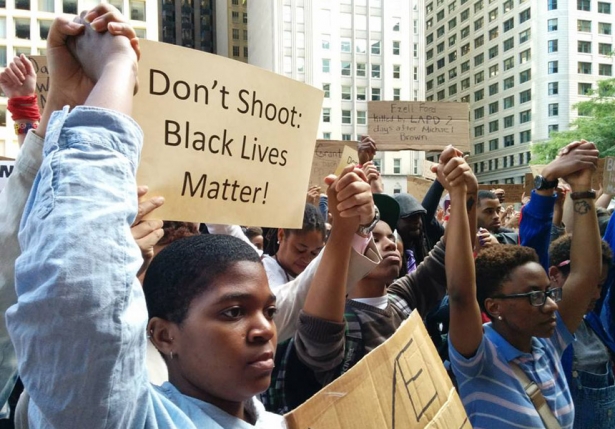 Protesters gathered in Chicago's Daley Plaza raise their hands in honor of those killed by police. (Kelly Hayes / National Moment of Silence Chicago)

Less than a week after the fatal shooting of unarmed 18-year-old Michael Brown by Ferguson, Missouri police, supporters across the country took to the streets on Thursday night to hold a national moment of silence and protest against state-funded violence.

Organizers in New York, Chicago, Washington, Detroit, Baltimore and about 90 other cities brought together tens of thousands to demonstrate solidarity with the people of Ferguson and demand justice for citizens wrongly and extrajudicially killed. According to a 2012 study, a black person is killed by police, security forces or individual vigilantes every 28 hours.

In Chicago, hundreds gathered in Daley Plaza to participate in sing-alongs, shout chants and hear poetry by the Black Youth 100 project before the 6:20pm moment of silence.

Several speakers addressed the crowd, including Rachel Jackson, a teacher in the Chicago Public Schools system.

“I was here [protesting] for Trayvon [Martin] two years ago. I am so mad that we are still here! This just continues over and over again. I teach third grade, and I’m afraid for my students. I’m afraid for the world they’re growing up in,” Jackson said during her speech.

At 6:20, the crowd fell silent for a coordinated national moment of silence. People held their hands in the air for four minutes—one minute for every hour Brown reportedly lay dead in the street—mimicking the gesture Brown allegedly made to prove he was unarmed before the police shot him down.

After the moment of silence and poetry readings finished, an impromptu march took protesters into the streets, prompting warnings from police present to return to the sidewalks. However, the officers did not attempt to interfere with the march and made no arrests. The attendees eventually returned to Daley Plaza and dispersed peacefully.

The action came just a day after a violent police crackdown in Ferguson, in which St. Louis County officers confronted protesters using rubber bullets and tear gas grenades; they also arrested several journalists and at least one local politician.

While most of Thursday’s protests, like Chicago’s, saw minimal interference, in some cities police arrested protesters who allegedly refused to comply with their orders to disperse. Newsweek reports that four activists were detained in New York City after leading a march from Union Square to Times Square. In Miami, eight activists from Dream Defenders, a nonviolent civil disobedience group created in response to the 2012 shooting of Trayvon Martin, were arrested after they occupied the James Lawrence King Federal Justice Building to demand justice for Brown and Israel Hernandez-Llach, a tattoo artist who died after a Miami police officer used a stun gun to subdue him during an arrest.

Meanwhile, in Ferguson, the situation changed dramatically on Thursday night after the Missouri State Highway Patrol took over crowd control from the local police. The Washington Post reports that Missouri Highway Patrol Capt. Ronald S. Johnson, a Ferguson native who was tasked with overseeing the new response, even marched in solidarity with local residents, offering his apologies for the violence of the night before and allowing those gathered to march through the streets unmolested.

Additionally, on Friday morning Ferguson police released the name of the officer, Darren Wilson, who fatally shot Michael Brown, acceding to one of the key demands of protesters.

More rallies are scheduled nationwide, including one on Saturday at 1 p.m. at the Daley Center in Chicago—exactly one week after Brown’s death.