The Hope From Audacity: Fight for $15 Pulls Off “Most Disruptive” Day of Action Yet 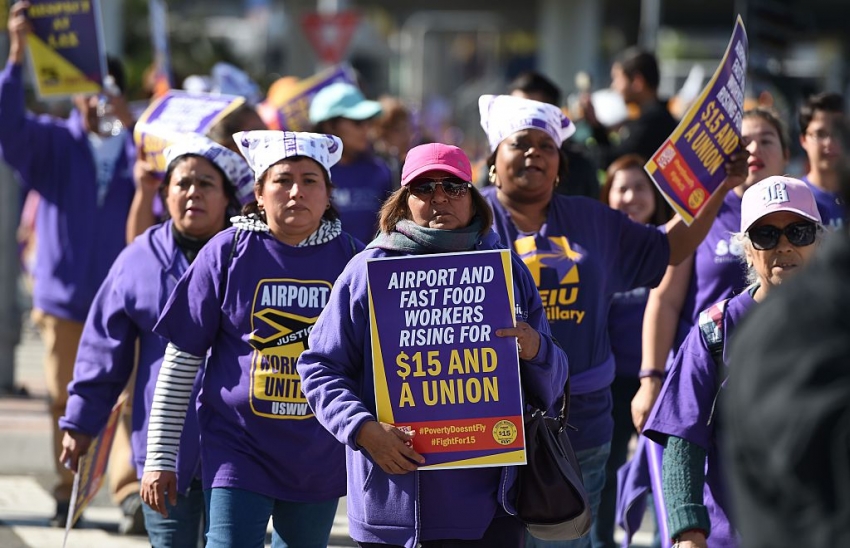 A new report from the National Employment Law Project (NELP) credits Fight for $15 with winning an increase of $61.5 billion in annual wages over its first four years. (ROBYN BECK/AFP/Getty Images)

Chicago—The movement known as Fight for $15 started in New York City as a surprise one-day strike. The workers’ demands then were simple and bold. They wanted a minimum wage of $15 an hour and the right to organize a union.

The workers who initiated the campaign could no longer tolerate lengthy debates over penny increases to the state, local and federal minimum wages. They called for more than double the federal minimum wage, which stood then—and now—at $7.25 an hour.

This was a dream that seemed not only aspirational but downright crazy when Fight for $15 first launched. And it was put forward by some of the workers with the greatest need—occupants of the virtually interchangeable jobs of the vast modern low-wage economy. These are the jobs that people take not just as a first job, but as the first of dozens of similar jobs in a career with little progress.

To mark its fourth anniversary this week, the Fight for $15 organization staged its largest and “most disruptive” national action to date, which included strikes, non-violent civil disobedience and actions at major airports like the Chicago O’Hare International Airport.

Even though it still has a long way to go, Fight for $15 had reason to celebrate.

A new report from the National Employment Law Project (NELP) credits Fight for $15 with winning an increase of $61.5 billion in annual wages over its first four years, mostly through state and local minimum wage increases. In other instances, employers boosted workers’ pay under public pressure.

On balance, these victories for roughly 19 million workers yielded a total raise more than 10 times larger than the raise U.S. workers received from the last federal minimum wage hike in 2007, according to NELP. By Fight for $15’s accounting, its actions have raised wages for 22 million workers.

Still, employers in the United States pay less than $15 an hour to some 64 million workers.

Over the past four years, Fight for $15 has reached beyond its base in fast food restaurants and launched organizing efforts with a broad range of poorly-paid workers: home care and child care workers, early childhood teachers, university teaching assistants, Uber and other ride-share company drivers, airport workers and many others. It has also inspired more tightly organized, conventional unions to reach out to other low-paid, low-skilled workers, such as car washers and retail sales clerks.

As the organization has grown, Fight for $15 has taken up new tactics and demands, in part reflecting the preoccupations of its members. While its two core demands remain a $15 minimum wage and union rights, the organization now also calls for an end to structural racism, to police killings of black people and to deportations of immigrants.

Before 6 a.m. Tuesday, a cool fall day, a crowd of several hundred protestors gathered outside a McDonald’s restaurant in the gentrifying but still largely working-class and immigrant neighborhood of Ukrainian Village on Chicago’s northwest side. Supporters unfurled a banner from a nearby grocery store. It read: “We Demand $15 and Union Rights, Stop Deportations, Stop Killing Black People.” The crowd chanted slogans, ranging from the humorously blunt (“We work, we sweat. Put $15 on our check!”) to the bluntly militant (“If we don’t get it. Shut it down!”) and the over-optimistically heroic (“El pueblo unido, jamas sera vencido!” Spanish for “United, the people will never be defeated").

The crowd included local politicians like Cook County Commissioner and recent insurgent mayoral candidate, Jesus “Chuy” Garcia, and workers whose jobs worsened recently as well as many others whose jobs have never been good. Uber driver Darrell Imani represented one of the newest companies whose workers have turned to Fight for $15 to protect what they fear losing. When he started driving for Uber a couple of years and about 12,000 rides ago, he typically earned roughly $25 an hour, or $40,000 a year.

“Now we can barely pay for gas and services,” he lamented. “We can’t keep living like this. We can’t. Uber drivers are on strike for living wages. I love doing it, but I want to be able to pay the bills. I’m trying to organize the group to be a union. Uber is making billions of dollars, but we are the ones who are making it for them.”

Also in the crowd was Keith Kelleher, president of SEIU Healthcare Illinois, Indiana, Missouri and Kansas, a large local union. He has a long history of trying, and often succeeding in organizing implausible groups of workers. In Detroit, Kelleher briefly organized hamburger chain outlets. He managed to organize widely dispersed home care workers in Chicago and other parts of Illinois. And just a few years ago, he led a march of retail clerks and fast food workers down North Michigan Avenue, the swank shopping strip of downtown Chicago.

“It has solidified in my mind that organizing can’t just be about wages, hours and working conditions,” Kelleher says. “It also is not just traditional organizing. This [Fight for $15] is the wave of the future. Workers want a union, and you can build organizations off of this. That’s the challenge.”

Organizing in the future may look much more like earlier periods of American labor history when “open shops” were common, meaning that individual workers could join or not join a union, Kelleher said. Open shops could become the rule again, as a result of the spread of right-to-work laws and the possibility of conservative judges overruling unions’ right to collect a “fair share” of normal dues to cover expenses of representing workers who do not join the union.

Kelleher’s home care workers’ union started along the model of an open shop, then won an agreement to have the state government “check off,” or collect, dues. But the Supreme Court later ruled that the home and child care workers in Kelleher’s union were not full-fledged state employees and, therefore, the union could not have dues deducted from their paychecks. The union now collects dues itself from about 65,000 of its more than 90,000 members, a remarkable achievement given how dispersed those workers are.

If employers think an open shop will weaken unions by making them less stable, Kelleher cites an unattributed maxim: “Where you don’t have permanent organization, you have permanent war.”

“With a union, you’re stronger”

The airport strike at O’Hare, the world’s fourth busiest airport, was one of the more dramatic actions. A year ago, Service Employees International Union (SEIU) Local 1 launched a campaign to organize about 2,000 O’Hare workers, employed by a modest number of contractors for tasks that include cleaning airplane cabins, providing transport for passengers with mobility problems, handling baggage and other services.

Forty years ago, these workers were employed directly by each airline and wages and benefits were attractive. But those arrangements collapsed under pressure from strong outside forces. Airlines increasingly subcontracted work to independent, specialized firms, which competed for work from the airlines and thus felt pressure to cut labor costs.  And with deregulation of the airline industry, the carriers were subject to pressures to cut cost, which was easier to do when they employed contractors rather than direct hires.

Also, there was an economy-wide shift towards what David Weil, now the administrator of the Labor Department’s Wage and Hour Division, called the “fissured workplace,” where more powerful elements of the enterprise or workplace try to minimize their responsibility for anything except maximizing profits. President Ronald Reagan’s breaking the strike and union of the air traffic controllers further legitimized an anti-worker strategy that airline managers can deploy. One of the consequences is that from 2002 to 2012 outsourcing of baggage porter jobs more than tripled from 25 percent to 84 percent.

Despite having multiple employers, with a varied workforce, “workers’ resolve is very strong,” says Tom Balanoff, president of SEIU Local 1. An estimated 400 workers at O’Hare took part in the strike Tuesday.

“I think workers know the airlines can pay,” Balanoff says. “The airlines haven’t talked to us yet, but I think we got their attention,” and he believes the union has the political as well as industrial strength to prevail.

Andrew Pawelko hopes that’s true. A former auto paint detail worker, he now works as the lead in a cabin cleaning crew for Prospect, a major contractor to big airlines.

“I like cleaning and detail work,” he says, but “the job needs more pay.”

Pawelko, who took part in the strike, makes $12.50 an hour; members of his crew make $10.75. At a previous job, the employer persuaded workers to get rid of their union. A short time later, Pawelko’s benefits were cut.

Rasheed Atolagbe-Aro, 50, a recent immigrant from Nigeria, is another strong union supporter who joined the strike, partly because of issues concerning safety and the high pressures at work.

“It’s high risk,” he says. “The spray used to clean is at a very serious level. But you’re fired if you refuse to come to work. With a union, you’re stronger.”

Although Fight for $15 is not a union, it can provide a way to fight on behalf of broad policies that help all low-wage workers, even if it has not yet created or even defined more localized vehicles to deal with individual member grievances, contracts and other traditional union tasks like signing up members, collecting dues and providing services. Such are some of the concerns about the group’s unconventional, loose structure, its lack of emphasis on formal membership and dues and its heavy financial dependence on the 1.8 million-member SEIU.

Can even a financially-strong union continue to underwrite such an ambitious undertaking?  What is the optimal amount of SEIU control over Fight for $15?

“We’re hoping to build this movement,” Mary Kay Henry, president of SEIU, said as she stood on a balcony at O’Hare along with more than a thousand members and supporters of Fight for $15, noting that Fight for $15 mustered actions in 340 cities and 20 airports in a single day, combining rallies and marches with more logistically-complicated tactics, such as civil disobedience. “Our plan is not to shape the organization into unions as we have known them, but something different.”

Henry takes inspiration from the way that the labor movement in Denmark, for instance, has raised fast food worker wages and workplace standards dramatically by sitting down and talking with corporate leaders in the field to negotiate an agreement. She says she hopes to do the same, perhaps within the coming year, by sitting down with McDonald’s, Burger King and Wendy’s—the big three in burgers—to negotiate an industry-wide agreement.

“Workers say a union is the way jobs become good jobs, the way to have a voice,” she said. “Organizing is the way to improve our lives.”