From the WWE to the White House: The Anti-Worker History of Trump’s SBA Pick 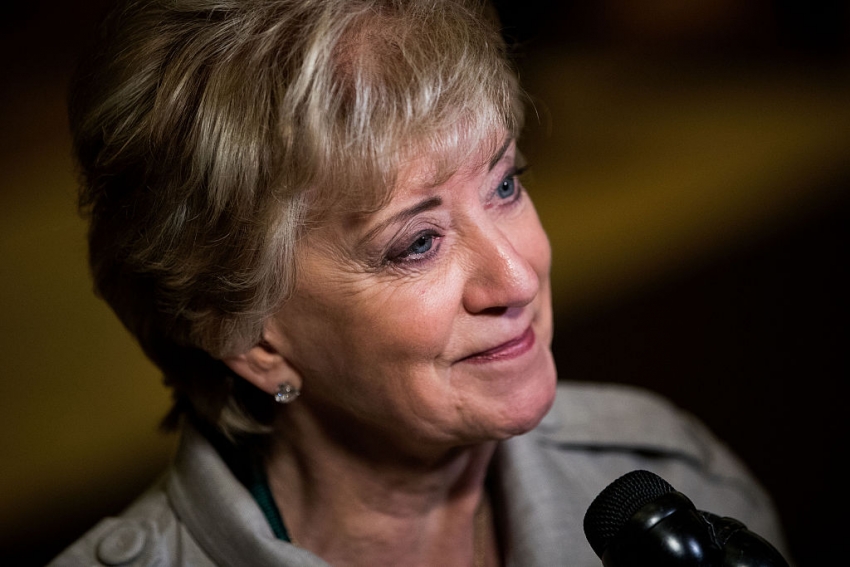 Under the stewardship of Linda McMahon and her husband, Vince, the WWE racked up a long list of controversies when it comes to its handling of the business’ lifeblood—the wrestlers themselves. (Photo by Drew Angerer/Getty Images)

Most news reports on her appointment have focused on her net worth and the fact that she donated $7 million to Trump’s campaign. Few have talked about the WWE’s questionable labor record under McMahon.

Under the stewardship of McMahon and her husband, Vince, the WWE racked up a long list of controversies when it comes to its handling of the business’ lifeblood—the wrestlers themselves. From longtime allegations of encouragement of drug abuse and unsafe work practices to the WWE’s refusal to treat wrestlers as proper full-time workers, McMahon’s record on workers’ rights is spotty at best.

With McMahon now likely to head a government department responsible for training and educating small businesses and entrepreneurs, her nomination raises questions about whether she will encourage or impart some of these dubious practices to employers at the expense of workers.

Wrestlers contracted to the McMahon’s WWE have a habit of dying young. To some extent, this is a product of their chosen profession. Professional wrestling is an incredibly hazardous spectacle that requires both the willingness and athletic precision to carry out perilous stunts, as well as the physical strength to withstand enormous stress and pressure on the body.

The WWE’s particular policies do not help matters, however. The company makes its athletes abide by a grueling schedule that sees them wrestling as much as four to five nights a week, traveling from city to city, with no off-season.

“There’s no schedule like the WWE’s,” wrestler Sami Zayn told the BBC this year. “Year-round, forever, no, like, light at the end of the tunnel.”

The top brass at the WWE have been accused previously of pressuring wrestlers to ignore injuries. In a tell-all interview, former WWE superstar CM Punk recounted how he was repeatedly pressured to wrestle through multiple injuries, including what later turned out to be an undiagnosed staph infection. (WWE denies Punk’s version of events and the doctor involved is suing him for defamation).

In 2015, two former wrestlers sued the company, claiming it had encouraged dangerous stunts like steel chair shots to the head, leaving wrestlers with concussions and long-term neurological damage, while discouraging them from getting medical help for injuries. This year, a group of some 60 former wrestlers, including a number of the company’s bigger names from the 1980s, sued the WWE for similar reasons, alleging a link between their wrestling injuries and a degenerative brain disease. (The company has called the suit “another ridiculous attempt by the same attorney who has previously filed class-action lawsuits against WWE, both of which have been dismissed.”) The company only outright banned chair shots to the head in 2010, when the problem reared its head midway through McMahon’s first Senate campaign.

Konstantine Kyros, an attorney representing the group of wrestlers, told In These Times that that the WWE has led a “systematic effort … to deprive the wrestlers of their rights through an improper workplace structure and unregulated working conditions.”

“There is a clear nexus between [McMahon’s] proposed cabinet role and the role she had as CEO of the WWE,” says Kyros.

The physical pressures McMahon’s former company places on wrestlers are coupled with drug-related hazards. There’s no doubt that some WWE wrestlers develop drug addictions due to the hard-partying, rockstar-like lifestyle that accompanies the job. McMahon herself claimed that the high death rate among wrestlers could be simply chalked up to their “personal habits.”

Contrary to her claims, however, some wrestlers, have developed substance abuse issues to deal with the pain of injuries and the mental stress of a never-ending schedule. Others ravaged their bodies through steroid abuse, pervasive throughout the industry particularly in its early years, and a necessity for the creation of the hyper-muscled physiques the industry has long favored.

For years, the WWE (then the WWF) employed Dr. George Zahorian, who in 1991 was convicted of drug trafficking. His lawyer at the time defended him, explaining that steroids were “used throughout the WWF. Wrestlers either use them or they don’t participate.”

In 2007, Linda McMahon testified to Henry Waxman’s House Oversight Committee that the company suspended its random steroid-testing program in 1996 after five years, because so few positive results were being found. The company later reinstituted a drug-testing policy in 2005 after the death of wrestler Eddie Guerrero from heart failure, linked to steroids, yet even after it did so, Waxman reported that 40 percent of wrestlers were testing positive for steroids and other drugs even when warned in advance.

By all indications, McMahon was heavily involved. She told Waxman that as CEO her responsibilities included “working day-to-day” with her husband, the “driving force behind WWE.” Most damningly, a 1989 memo written by McMahon that surfaced years later featured her asking another executive to tell Zahorian to stop coming to the company’s events and to “clue him in on any action that the Justice Department is thinking of taking,” after being tipped off that an investigation into Zahorian was about to be launched.

Shortly after the memo was sent, an executive did just that, and Zahorian shipped all his files on wrestlers to his attorney’s office, though the WWE lawyer said the files were not destroyed. Nearly two decades later, McMahon told Waxman that Zahorian had “distributed steroids unbeknownst to us.”

The result of all this has not been pretty. One study found that wrestlers aged between 45 and 54 had a mortality rate 2.9 times greater than that of the general American male population. Another study found that more than 46 percent of deceased male wrestlers who worked for the WWE between 1977 and 2012 died because of heart complications, versus some 26 percent of men who died of heart disease between 2000 and 2008 in the general male population.

At least a part of this can be chalked up to the lack of regulations on the WWE. In the late 1980s, McMahon personally and successfully persuaded the Pennsylvania state legislature that wrestling was simply entertainment, rather than a sport, which negated the need for athletic regulation. She then followed this up with a years-long lobbying campaign in the federal and state governments, which involved the WWE spending more than $1 million.

The money was worth it: Wrestling is now deregulated in more than half the states, and the company beat back several state efforts to mandate drug-testing.

The health problems faced by wrestlers at McMahon’s former company are compounded by what have been alleged to be exploitative labor conditions.

Despite mandating a non-stop schedule for their wrestlers that gives the company a large amount of say over virtually every aspect of its talent’s daily lives, the WWE insists that its performers are not employees, but independent contractors. This means that the company, which recorded a total revenue of $659 million in 2015 and whose chairman and CEO is a billionaire, can save money on paying out contributions to Social Security, Medicare and unemployment insurance.

As contractors, wrestlers could theoretically go to another company. But the WWE essentially owns a virtual monopoly in the industry. What’s more, the company tends to own the rights to the wrestler’s ring name, character and more, hobbling them from continuing their career outside of the company.

More seriously for workers whose paycheck is based on physical fitness and extremely dangerous work, the WWE doesn’t cover its wrestlers’ health insurance. As of 2016, the company forces wrestlers to buy health insurance, setting them up to pay sky high premiums, given their riskiness to insurers.

McMahon’s company has also been known to slip so-called death clauses into contracts, releasing the WWE from liability for a wrestler’s death whether in the ring, due to any injuries arising from the work or even because of the company’s negligence. When McMahon was challenged on this during her 2010 Senate campaign, a spokesperson said the company has “never exercised that option.” Except it had, some 10 years earlier, after the family of Owen Hart—who died after a botched entrance resulted in a 78-foot fall—sued the company. (The WWE ultimately settled the case for $18 million).

Some of these issues could have been avoided with the help of a union. But in the hands of the McMahons, the WWE has been virulently anti-union, quashing an early organizing effort by wrestler (and former Minnesota Governor) Jesse Ventura in the 1980s.

In These Times reached out multiple times to the WWE via email to comment on the various allegations against it. No one responded.

McMahon spent an estimated $100 million on her two failed campaigns. During the course of her campaign, it emerged that the McMahons, who had gone bankrupt early on in their marriage—a fact McMahon had used to shore up her relatability to working people—had never paid back some of their creditors, despite becoming fabulously wealthy later in life. They owed almost $1 million to 26 creditors in 1976, or about $3.9 million in 2012 dollars. Under pressure during her second campaign, McMahon reportedly said that she and her husband would repay private creditors involved in their bankruptcy.

In 2010, when asked if the minimum wage should be reduced to help struggling small businesses, McMahon replied that “we ought to look at all of those issues in terms of what mandates are being placed on businesses and can they afford them.” (She later said she had misheard the question and did not support decreasing the minimum wage). Upon further questioning, McMahon revealed that she didn’t even know what the Connecticut minimum wage was, nor whether employees at the WWE earned it.

McMahon’s final campaign closed out with accusations by some of her campaign’s former part-time workers that she had failed to pay them after the election was over. The checks the campaign subsequently sent the workers following their complaints bounced, which the campaign claimed was a mistake. However, another worker was handed an envelope with a check (that eventually bounced) and a condom inside it, and told he was “screwed” after talking to a news station.

All of this, coupled with McMahon’s inexperience in the public sector, doesn’t bode well for the future workers of small businesses in America. Since 1953, the SBA’s mission has been to “preserve free competitive enterprise and to maintain and strengthen the overall economy of our nation.”

But McMahon’s history—running a near monopoly that has been accused for decades of disregarding its employees’ health, safety and fair treatment—risks turning its mission into one that sacrifices workers for profits.