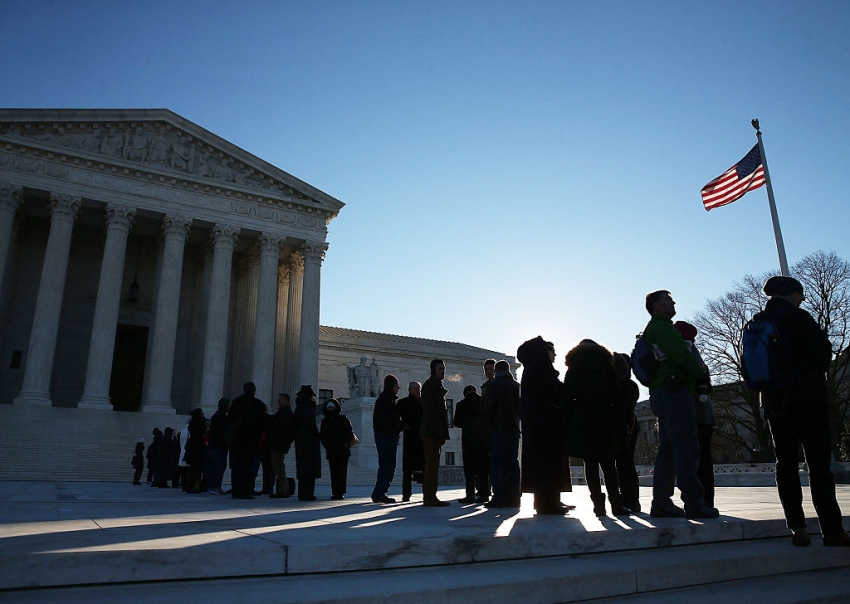 As Democrats and the labor movement prepare for a possible fight over Trump’s imminent appointment to the Supreme Court, they should recognize that several major labor cases, brought by some of labor’s most persistent enemies, are waiting in the wings. (Photo by Mark Wilson/Getty Images)

The Supreme Court gave unions an unexpected victory last year when it issued a decision in a case that had threatened to take away the right of public sector unions to collect dues from workers they represent. That win may be short-lived.

Friedrichs v. California Teachers Association was meant to be the capstone in decades of cases that sought to have the courts determine that fair-share fees for public sector workers are unconstitutional. Fair-share fees, or agency fees, require workers represented by a union to pay the portion of fees that covers collective bargaining. They seek to balance the worker’s right to dissent from the union by relinquishing membership and not paying for activities that aren’t related to collective bargaining, with the union’s right to avoid free riders and not be forced to represent a worker who contributes nothing.

The Supreme Court, largely through decisions written by Justice Samuel Alito, had indicated that its 1977 case that allowed for fair-share fees in the public sector was ripe for a rare overturning by the Court. It all but invited a challenge. Several cases were in the pipeline, but Friedrichs took the unusual approach of conceding before each lower court that it should be dismissed so that it could move quickly to the Supreme Court. Friedrichs faced a hostile oral argument before a conservative majority; unions braced for the worst. Then, as the Court was drafting its opinion, Justice Antonin Scalia died, and with him, so did Friedrichs. The Supreme Court issued a tied 4-4 decision affirming the lower court in March.

However, there is another case in the pipeline that was stayed pending the outcome of Friedrichs. That case, which began as Rauner v. AFSCME, was originally brought by the ultra-wealthy Republican Illinois Gov. Bruce Rauner, who—shortly after taking office—issued an executive order placing all fair-share fees in an escrow account, rather than turning them over to unions. But Rauner screwed up a basic part of the case because he didn’t have standing to bring the case.

A federal judge wrote that Rauner “has no personal interest at stake. He is not subject to the fair share fees requirement. Instead, he essentially claims to have a duty to protect the First Amendment rights of all public employees in the state … In effect, he seeks to represent the non-member employees subject to the fair share provisions of the collective bargaining agreements. He has no standing to do so. They must do it on their own.”

To fix the problem, employees filed as intervenors (“undoubtedly with the Governor’s blessing,” as the judge noted), with the backing of the National Right to Work Legal Defense Foundation and the Liberty Justice Center.

Janus v. AFSCME, named after one of the workers, is pursuing the same strategy as Friedrichs in trying to get to the Supreme Court quickly. The Janus plaintiffs filed their second amended complaint in July, stating that the Supreme Court’s 1977 Abood v. Detroit Board of Education case, which permitted fair-share fees, remains good law, and all but invited the District Court in the Northern District of Illinois to dismiss their complaint. The District Court did so, and in their appeal to the Seventh Circuit Court of Appeals, the plaintiffs similarly state that their case must be dismissed. The goal, of course, is to get the case in front of the Supreme Court just as a Donald Trump appointee to the Court is seated.

Seattle University School of Law professor Charlotte Garden explains that this strategy also “allows the case to go up without a factual record. This means that there is no record that the unions can point the justices to in order to show the importance of agency fees.”

In Friedrichs, Justices Ruth Ginsburg and Stephen Breyer tried to give the union’s attorney the opportunity to state what he would have put in the record if he had had the opportunity to do so. But, as Garden explains, “being asked to make a proffer before the Supreme Court is tricky without the ability to engage in discovery.”

The Janus case is almost identical to the Friedrichs case in that both are premised on the idea that there is no line in the public sector between political and non-political activity. Conservatives justices have firmly embraced this rational, as was evident during the Friedrichs oral argument when Chief Justice John Roberts challenged California’s attorney to give his “best example of something that is negotiated over in a collective bargaining agreement with a public employer that does not present a public policy question.” The attorney responded that mileage reimbursement rates were such an example. Roberts shot back, “That’s money. That’s how much money is going to have to be paid to the teachers. If you give more mileage expenses, that costs more money.”

If everything that a public sector union does is political, then it is a much shorter line to find that a worker should not have to pay any part of the costs of collective bargaining. This would be a very worrisome conclusion for unions, which must do what they can now to stop such an outcome from happening.

As Democrats and the labor movement prepare for a possible fight over Trump’s imminent appointment to the Supreme Court, they should recognize that several major labor cases, brought by some of labor’s most persistent enemies, are waiting in the wings. Senators should question nominees about their view of Abood and other Supreme Court precedents that protect public employees’ labor rights. And if labor has any sway within the Democratic Party, it should make it clear that these issues should be disqualifying for any new appointment to the Court.