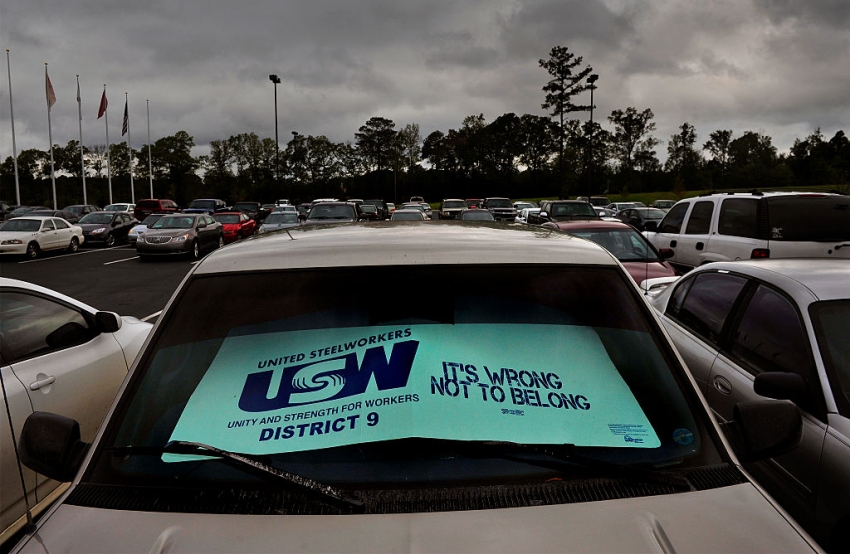 Because activists tend to conflate our legal rights with our actual human rights, we doggedly pursue age-old strategies because “it is what it is.” We must stop this. (Photo by Michael S. Williamson/The Washington Post via Getty Images)

If Donald Trump’s first week as president wasn’t depressing enough, Thursday brought a report that showed union membership fell in 2016. Union members are now just 10.7% of the overall workforce and only 6.7% of the private sector. Those are the lowest levels since the Bureau of Labor Statistics (BLS) began tracking them in the early 1980s—and possibly the lowest since the 1920s.

Bosses and union haters will crow that unions are dying institutions and even our friends may write eulogies. But this funeral is for the wrong corpse.

What may be dying is the system of collective bargaining that developed in the years after World War II. That system is one where unions exclusively bargain on behalf of workers on a company-by-company basis, not just for wages but also for an ever-expanding portfolio of employer-paid benefits. These collective bargaining agreements emphasize peaceful resolution of disagreements through grievance procedures, mediation and arbitration and can cover many years at a time with guarantees of no strikes and lockouts.

When it worked, it really worked. The postwar period is marked by an historic rise in compensation and living standards for American workers and a sustained reduction in inequality. United Auto Workers (UAW) negotiations used to receive the same breathless news coverage that the stock market receives today. Wage increases won by the union affected the wages of even non-union workers in totally unrelated industries.

But there were problems with the system that made its downfall inevitable. The emphasis on employer-sponsored benefits meant that new companies could waltz in and instantly be competitive by offering their employees a stingier benefits package (and by fiercely resisting union organizing). This, in turn, drove unionized companies to outsource and subcontract jobs, or ship them overseas, to replace humans with robots and to overwork their existing employees to avoid hiring more workers. Arguably, such “labor-saving” measures account for much of the decline in union density in the last 30 years.

This collective bargaining framework also systematically sapped unions of their militancy. Congress made solidarity strikes and sympathy boycotts illegal. The courts stripped striking workers of legal protections. And, as labor scholar and activist Stanley Aronowitz convincingly argues in his book, The Death and Life of American Labor, the “no-strike” and “management rights” clauses of most collective bargaining agreements box unions into a position where they are restricted in what they can fight for and when. Most have a legal obligation to tamp down spontaneous worker protest while contracts are in effect.

We saw a dispiriting example of this when the union that represents the Rockettes rushed to issue a statement to emphasize the dancers’ contractual obligation to not refuse to work at Trump’s inauguration. Ironically, if the workers weren’t covered by a collective bargaining agreement, they would have had a far stronger legal right to refuse to dance.

Contrast that with the inspiring example of the New York Taxi Workers Alliance (NYTWA), which quickly organized a strike Saturday night at the John F. Kennedy International Airport to protest Trump’s anti-Muslim ban. The taxi workers don’t have collective bargaining rights so they don’t have a no-strike clause. (They also have few benefits or job protections and work long hours for very low pay; collective bargaining does have its benefits.) But even though the NYTWA is not legally certified, it still managed to build an organization that is nimble enough to strike for better pay and for human rights.

Toward a more perfect union

Because activists tend to conflate our legal rights with our actual human rights, we doggedly pursue age-old strategies because “it is what it is.” We must stop this, and pursue an internal debate that is crystal clear about what we can’t control at the moment—Congress, capital mobility and our psychotic president’s attention span—and what we can—our strategy, structure and demands.

Take for instance the fight for universal healthcare. One of the flaws of Obamacare was that it preserved the employer-based health insurance system, which was developed as an accident of collective bargaining. During World War II, the government froze wages to fight inflation, but did allow unions to negotiate for “fringe” benefits. Many workers emerged from the war with health insurance through their job, but union leaders at the time viewed this as a stopgap until Social Security could be expanded to provide universal healthcare.

All these decades later, unions can and should lead the fight for “Medicare for All.” Getting health insurance premiums off employers’ payrolls and replacing them with a payroll tax that all employers pay equally would take benefits out of competition (and get bosses out of the business of determining care and policing their workers’ vaginas).

I know a lot of leaders and activists who view the benefits negotiated into contracts as the “union advantage,” which makes membership attractive and is an essential part of what unions do. But offering a compelling vision of universal rights and leading fights to win and preserve them could also be what unions do, and is what unions do in most other industrialized nations in the West.

The ghost of labor peace

The threats that labor faces from a Republican government cannot be downplayed, and could tempt one into a depressive funk. A bill to make “right-to-work” laws the law of the land was introduced in Congress on Wednesday. But if we lose that fight, there are some strategic choices that are still within our control.

The first is whether to abandon exclusive representation and kick out the scabs.

The combination of exclusive representation and agency fee is a uniquely American framework, and it, too, arose out of World War II. That wage freeze described earlier followed unions’ no-strike pledge to aid wartime production. Workers who were frustrated with the lack of raises and with union leadership obliged with preventing job actions stopped paying dues in protest. The government granted those wartime contracts a “maintenance of membership” clause that prevented workers from quitting the union that represented them, which evolved into today’s “agency fee.”

It is that combination—of exclusive representation, agency fee and no-strike and management rights clauses—that make it possible (and arguably necessary) for unions to agree to “shared sacrifice” when necessary (and sometimes lopsided sacrifice when unnecessary).

If unions refused to be exclusive representatives, it would open the door to multiple competing unions at each workplace. It would make no-strike clauses impossible to enforce. It would mean that in every major issue that gets settled with the boss, there could be a stubborn group of workers who go its own way to keep up the fight or raise larger demands. It would also mean a plethora of less confrontational, employer-friendly associations could compete with unions on their own turf.

In essence, it would mean the end of labor peace. Since corporations long ago decided they weren’t interested in labor peace, while we maintained the illusion that we could convince them to give it a try, it might be time to give up the ghost.

A union of leaders?

Another key decision that would be entirely within unions’ power should membership become voluntary is which workers to target for recruitment. Currently, most open shop unions try to sign up all the workers they represent. Often, they fall far short of that goal.

When a workplace has few members, it makes the first union members de facto representatives, if not the actual shop stewards. But what if that early joiner is not respected by his coworkers? What if he’s a sexist? What if he’s bad at his job and his coworkers frequently have to pick up the slack? In its rush to pick up dues-paying members, a union could alienate 10 times as many potential people.

This is not how we structure new union organizing campaigns. In those, we target natural leaders. We look for workers who are brave, who ask smart questions, who are good at their jobs and respected by their coworkers. Often, the first worker to inquire about organizing a union, and from whom we learn as much as we can about the workplace and its leaders, is kept off the organizing committee because he doesn’t fit the bill.

This is a radically different way of viewing a unionized workplace for most Americans. It is essentially the way that French unions organize. Union density in France is even smaller than in the United States, yet unions there are capable of organizing massive general strikes. There are many reasons for that, including the legal framework for bargaining, but the fact that French unions are “leaderfull” organizations is also a factor.

We don’t control the legal framework for collective bargaining, but we can control who we count as members. And that kind of distinction between what we can’t change and what we can must be analyzed and sharpened.

Collective bargaining, with exclusive union representation and agency fee, but limited to within the four walls of a specific employer, is “what a union is” to most people. But it is not how unions look and function in other places, nor, indeed, in our own history.

Unions have been around since the earliest days of our republic, and the concept of workers banding together will outlive all governments. We get to decide what that looks like.