Nursing Home Workers Win Big After Threatening to Strike: “We Have the Power Now” 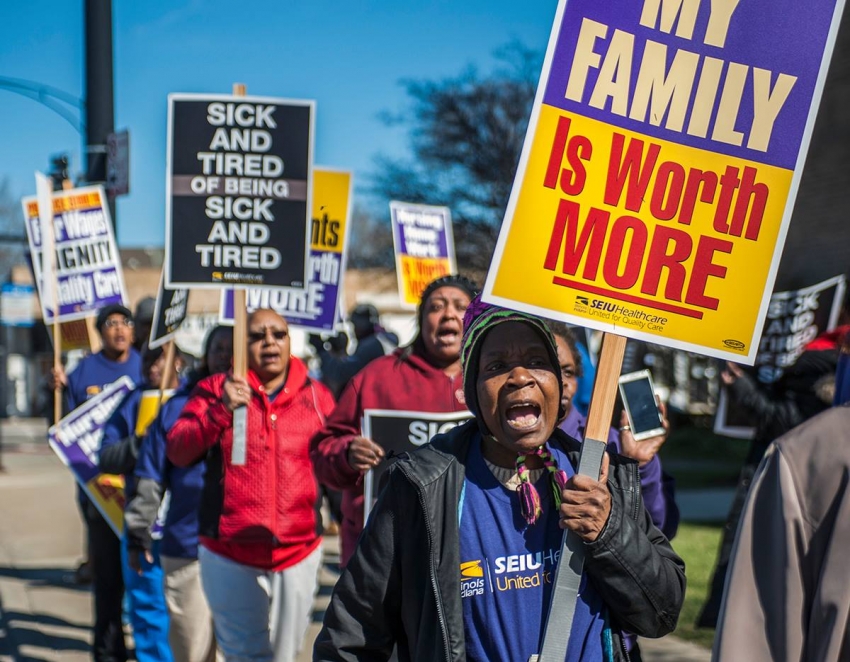 Equally important to most workers as pay, the new contract gives them more protection of rights on the job. (SEIU Healthcare Illinois & Indiana/ Facebook)

CHICAGO—For more than two years, around 10,000 Illinois nursing home workers worked without a new union contract—waiting and agitating for a long overdue pay raise and better protection of their rights on the job. Those rights, they argued, would also improve the care of the ill and elderly in their charge.

Fed up with the owners’ intransigence, 5,000 of those workers announced that they were prepared to walk out. By raising the credible threat of the biggest strike in the history of the U.S. nursing home industry, the union convinced the leading employer alliance in the state—the Illinois Association of Health Care Facilities—to throw in the towel at the last minute.

Early this month, the owners agreed to most of the union’s key demands, and the union called off the strike. Later, workers voted, and 97 percent approved the contract.

The workers—members of a large four-state healthcare local of the Service Employees International Union (SEIU)—seemed happy with their financial gains, even if some thought they deserved more. (SEIU calculates that it represents 25 percent of Illinois nursing home workers and 75 percent of those in the Chicago metropolitan area.)

“It is great. I’m not going to complain,” said Pamela Blecker, whose pay after 17 years as a certified nursing assistant will rise from $11.31 an hour to $13.69 an hour under the new contract. “I think it could have been more, but something beats nothing. I would have wanted $15 an hour. Of course, I was willing and ready to strike.”

“Oh, yeah, I was ready to strike,” said William Rose, 56, who works in housekeeping and dietary departments in Chicago’s west side. “I wanted to go straight for $15, but it was pretty fair, better than what [the employers] said they could do.”

He said he also felt hopeful that the contract would help the union reduce the persistent problem of understaffing where he works.

“It was great to have this contract,” said Susana Fragoso, 41, a certified nursing assistant. “Some people were making $8.55 an hour, and under the new contract they would make over $11, some close to $12, but overall there will be an average of a 24 percent increase in pay.”

But equally important to most workers as pay, the contract gives them more protection of rights on the job—faster grievance procedures, stronger staffing rules, fewer ways for employers to raise issues of immigration status and protections against management undermining higher-paid workers with preferences for those paid less.

Nursing home workers also learned how to deal with many of their problems by collectively confronting their supervisors. That experience led to reliance during negotiations—and a strike, had it been needed—on “contract action teams,” which kept workers involved in the fight, making it “a totally different ball game,” according to housekeeper Francine Rico.

Nursing homes rarely occupy the headlines, reflecting popular neglect of the residents as much as the workers. But some analysts see such personal care work as the jobs of the future. Among the fastest growing occupations, according to the U.S. Bureau of Labor Statistics, are nursing, therapy and other examples of people caring for people. Financial Times columnist Sarah O’Connor writes that “if these are the fastest-growing jobs in the economy and some of the uniquely human jobs of the future, we need to make them better.”

The workers’ contractual gains require employers to pay workers better and, indirectly, improve care for residents. But satisfactory long-term nursing home care (or care at a client’s home when it’s the choice of patients or doctors) will require more public funds, such as Medicare and Medicaid. Those programs, however, could be vulnerable under the current Republican administration.

More public funding needs to be linked with other reforms to try to ensure high quality and relatively equal care for everyone, according to SEIU. Chief negotiator for the union, Larry Alcoff, notes that New York offers the “gold standard” in residential nursing home care and relies heavily on non-profit nursing homes. Public or non-profit facilities are less likely to be focused on real estate strategies and investor profits and more on quality of care, he says. The industry needs to be more accountable to residents, their families, the workers and the public at large. Alcoff argues for a “re-balancing of priorities” (such as choices of more appropriate models of care, at or away from home) and for increased public financial support. In that vein, the Illinois contract includes language designed to make the nursing home owners more accountable for providing high-quality care standards.

The achievements of the almost-strike fall into two broad categories, both important. On the one hand, workers scored significant gains in material welfare. On the other hand, they strengthened their moral authority and ability to continue their fight by creating more durable means of collective power.

Here is how two nursing home workers summed up their success:

“It’s going to make a big difference for me and my family,” said Debra Ward, 56, who has worked in nursing homes for 10 years and served on the bargaining committee. “I knew it would be tough. I didn’t want to go on strike, but enough was enough.”

“Next time will be a totally different ball game,” said Rico. “We are going to increase our steward leadership and be prepared. Most important, we have shifted the power at work. We have the power now.”