Activists in Puerto Rico Want the Jones Act Eliminated—So Why Are Unions Defending It? 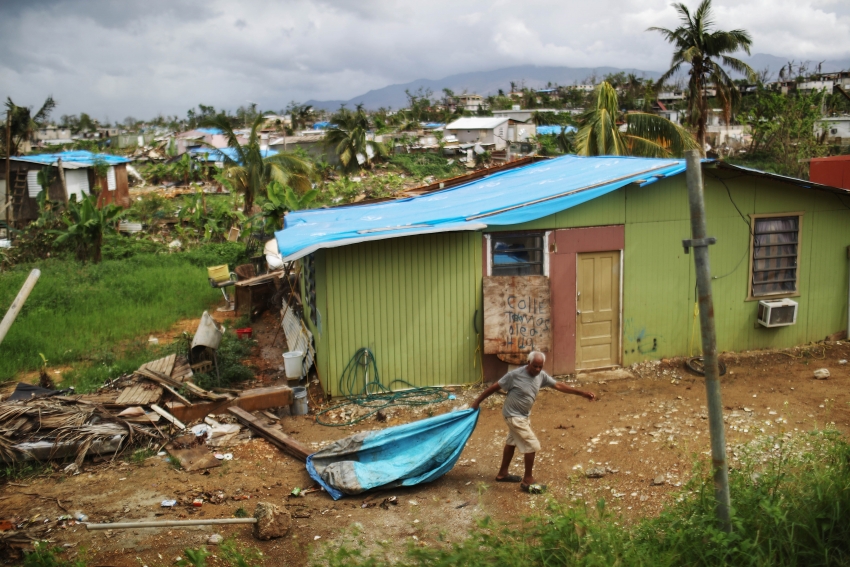 After Hurricane Maria, many in Puerto Rico have renewed calls to eliminate the Jones Act. (Mario Tama/Getty Images)

In the aftermath of the devastation wrought by Hurricane Maria on Puerto Rico, an obscure law governing maritime commerce has grabbed national headlines: The Merchant Marine Act of 1920, known colloquially as the Jones Act. After facing political pressure and at the request of Puerto Rico Gov. Ricardo Rosselló, on September 28, President Trump issued a 10-day waiver of the Act to ease shipping regulations on the island. That waiver expired last week.

Many in Puerto Rico, along with members of the Puerto Rican diaspora living on the U.S. mainland, argue that the statue is stifling aid by presenting an unnecessary barrier to the procurement of basic relief supplies. Maritime unions, meanwhile, contend that the measure is essential for protecting seafaring workers.

So what is the Jones Act? What does it do? And what other factors might be getting in the way of supplies reaching Puerto Ricans?

What the Jones Act does and doesn’t do

The Jones Act stipulates that only U.S.-flagged ships can operate between U.S. ports, so any American goods coming into Puerto Rico via U.S.-governed ports have to arrive on U.S.-flagged, U.S.-made ships. This mandate prioritizes the use of American ships and workers, and inhibits foreign shipping companies’ access to inter-U.S. shipping routes.

Passed on the heels of World War I, the measure, named for its sponsor, Rep. Wesley Jones (R-Wash.), was intended to ensure that America would thrive in maritime commerce and be full of seafaring men in case they were needed for another war.

Foreign-flagged vessels from foreign ports are not prevented from docking in Puerto Rico, only from shuttling goods from the mainland to the island. The law also doesn’t mandate that imported goods bound for Puerto Rico pass through a mainland port first.

The case against the act

Well before Hurricane Maria, the Jones Act was blamed for driving up the cost of living in Puerto Rico, where groceries are as much as 21 percent more expensive than on the mainland. In 2011, the U.S. Transportation Department Maritime Administration found that day-to-day operating costs were 2.6 times higher on U.S. ships compared to international vessels, and that labor costs could be as much as 5 times higher.

On the island and off, a waiver of the Jones Act has been a mainstay of demands for relief and recovery packages, both to ease the flow of goods after the storm and for long-term reconstruction.

“If Maria is enough to get us out of that, that would be amazing,” says Sofía Gallisá Muriente, an artist and organizer from Puerto Rico who was also active in Occupy Sandy before moving back home to San Juan from New York City four years ago. “That’s the best thing that could come of this storm, but I don’t know if we could pull that off. The most I think we could get would be a waiver for a year.”

Among those calling for a permanent lifting of the Jones Act for Puerto Rico is the Climate Justice Alliance, a network of climate justice groups in the United States with ties to several labor unions, but not the National Maritime Union, whose members would be most affected by a permanent lifting of the law. The network held a Day of Action on Wednesday, October 11 to call attention to their list of demands, including full debt relief and a transparent decision-making process around the distribution of aid resources, among other things.

After the Day of Action event in New York, Elizabeth Yeampierre, Executive Director of Uprose, a New York City-based group and member of the Climate Justice Alliance, told In These Times, “To have the waiver because they want to make the sipping industry happy at the expense of the lives of the Puerto Rican people is an international disgrace.”

Asked about maritime unions’ concerns over lifting the Jones Act, Yeampierre, herself Puerto Rican, says, “It can’t just be about their pay and their resources right now, because climate change is coming for all of us. Justice is not one of those things you can parse. When I have a labor dispute it’s not about getting justice for my people but no one else.”

Maritime unions have mounted their defense of the Jones Act on the basis that it protects seafaring workers and well-paid American jobs. “The Jones Act is one way to insure that vessels operating between U.S. ports respect fair labor standards and don’t exploit seafarers,” Craig Merrilees, Communications Director for the International Longshore & Warehouse Union, told In These Times.

To get around strict labor standards in the United States and elsewhere, ship owners may adopt a practice known as “re-flagging,” or registering a vessel in a country—say Liberia or Panama—with lax worker protections. Flying under so-called “Flags of Convenience” is a way for maritime operators to exploit workers on their ships, who are especially vulnerable to mistreatment due to their dependence on employers during extended trips at sea.

By preventing this evasion, Merrilees says, “the Jones Act is an important protector of decent working conditions and good-paying jobs for seafarers in the shipping industry. Crews on U.S. flagged ships rarely experience anything like the terrible abuse and exploitation often found on vessels flying a flag of convenience.”

The Jones Act has created a somewhat counterintuitive set of political alliances: Shipping companies like it for the access it gives them to U.S. ports and make hay about its importance to national security, while maritime unions want to defend the workplace protections it provides. At the same time, opponents of the Jones Act make the case that the law unfairly drives up the cost of living in Puerto Rico, which is already higher than on the mainland by virtue of the island being largely dependent on imports. Then there are the politicians such as John McCain and free market think-tanks including the Heritage Foundation, that have lobbied against the bill on anti-regulatory, anti-labor grounds.

The scale of disaster

While the politics surrounding the Jones Act remain thorny, several other factors also impede the flow of aid to Puerto Rican residents—including the Trump Administration itself.

President Trump threatened on Twitter last week to disband federal relief efforts on the island entirely. An official statement later clarified that “successful recoveries do not last forever.” Reports in the weeks since the storm have told of shipping containers stranded at ports due to downed logistics networks and government mismanagement, and even goods being confiscated at the San Juan airport after being flown in on commercial planes.

Gallisá Muriente dealt with similar issues after Hurricane Sandy, struggling to procure aid for some of the hardest-hit parts of New York City, albeit on a different scale. “That was a big lesson for me from Sandy: That there’s no such thing as a natural disaster,” she says. “It’s really the human disasters that complicate things—social conditioning, priorities, bureaucracy. And it doesn’t work to go back to normal when that normal was also problematic.”

Already, Gallisá Muriente notes, she and others have put some of the lessons learned in Occupy Sandy to work on the ground, while recognizing that there are major differences between conducting grassroots relief efforts in the Big Apple and on a small, austerity-stricken island.

“There are certain general logistical things that we’ve borrowed from that experience: creating lists of suggested donations, Amazon registries where people can buy specific things that we need,” she says. “The governor keeps saying everything is fine and is talking about all the aid coming in, but no one sees it or feels like things are getting any better.”

Heriberto Martínez-Otero, who teaches economics at a high school in San Juan and at the Inter-American University of Puerto Rico, told In These Times via Skype that there are still “5 or 6 municipalities that are incommunicado. Most of the municipalities with communications,” he adds, “don’t have ATMs or open banks. The schools are not open, and the hospitals are without power…except for some areas here in San Juan and some of the privileged suburbs, everything is a complete disaster.”

He also notes issues with the sparse relief efforts that are being administered, mainly by the U.S. government. “FEMA, I don’t know where they are. But the U.S. military are moving around most parts of the island with big guns,” says Martínez-Otero. “These guys think this is a war zone.”

What’s next for the island

Many Puerto Ricans—while recognizing the role the U.S. military plays in disaster relief—are weary of having troops on the ground for the long-term. Speaking to me from his classroom in San Juan, Martínez-Otero says, “On the streets here, in front of the school, this is a military state.”

“I am against the Jones Act,” Martínez-Otero continues, “but I don't know if waiving the Jones Act is the way to solve the current situation we’re in.” He also mentioned that it was hard to tell whether the 10-day waiver had improved conditions on the island, saying that a year-long waiver would likely be necessary in order to improve Puerto Rico’s distribution infrastructure.

Debates around the Jones Act aren’t likely to be resolved in the near future, and certainly not before the Senate moves to vote on the short-term, loan-based aid package for Puerto Rico that the House passed on Thursday. What does seem clear is that the overlapping crises on the island aren’t likely to end anytime soon—and U.S. policy is only helping deepen them.