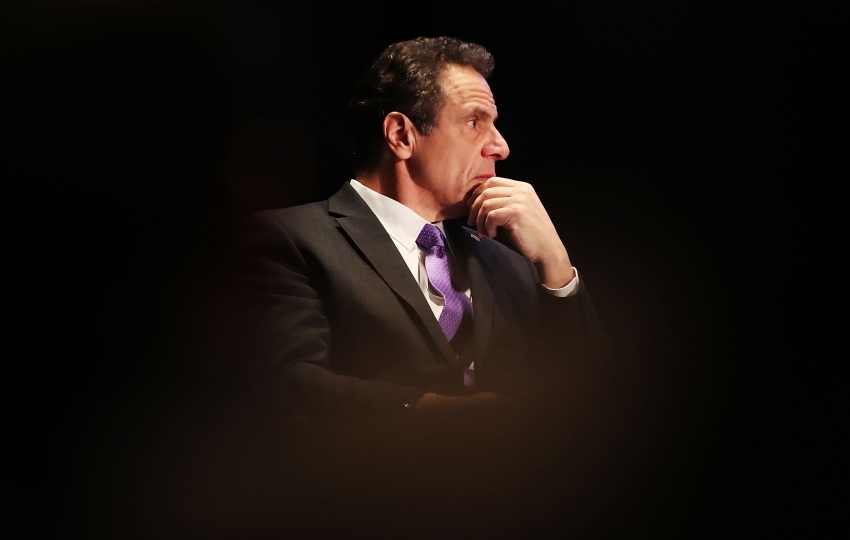 At a meeting in Albany, N.Y. on Saturday, the State Committee of Working Families Party New York planned to vote on whether to endorse Cuomo or Cynthia Nixon, who is mounting a progressive challenge to the incumbent governor.

In advance of the meeting, Cuomo met with unions and community groups to dissuade them from endorsing Nixon, and on Friday two of the state’s unions, SEIU 32BJ and CWA Local 1, announced they would leave the WFP.

As for groups that have already pledged support to Nixon, Cuomo reportedly said, “If unions or anyone give money to any of these groups, they can lose my number.” In a press statement, New York Working Families Party Director Bill Lipton said Cuomo had repeated the statement several times at a meeting earlier this week.

“Andrew Cuomo is acting like Andrew Breitbart,” Jonathan Westin, executive director of New York Communities for Change (NYCC), told In These Times on Friday afternoon, responding to news of the unions leaving the WFP. “This is completely reminiscent of how the right wing went after community organizing. It’s not a hidden camera, but it’s close,” he added, referencing the late Breitbart’s successful attempt in 2009 to bring down Association of Community Organizations for Reform Now, or ACORN. “What type of world are we living in where the Democratic governor of New York is trying to take down community organizations?”

Aside from NYCC, which fights for affordable housing in New York and is one of the leading forces behind New York’s Fight for $15 campaign, the list of groups in the WFP that have endorsed Nixon includes the grassroots organization Citizen Action of New York and Make the Road Action (MRA), a group devoted to building political power in working-class Latino and immigrant communities.

Gov. Cuomo's threats could have far-reaching consequences for these community organizations, which, Westin says, rely on unions such as SEIU and CWA for significant funding every year. SEIU, for example, has contributed millions of dollars to NYCC since 2011 as part of the Fight for $15 campaign.

"Governor Cuomo is trying to find ways to threaten us over our support for his challenger,” MRA co-executive directors Javier H. Valdés and Deborah Axt wrote in a statement. "We are not going to succumb to the pressure. Our members are proud to support Cynthia Nixon and Jumaane Williams, the clear progressive candidates for Governor and Lieutenant Governor. We are also proud to continue to stand with our union brothers and sisters."

Westin sees Cuomo’s threats as part of a pattern. “It’s how the governor chooses to use his bully pulpit to really go after folks,” he says. “He will stop at nothing. He will demolish organizations that serve poor people to accomplish his corporate agenda...The governor in his maniacal way knows how to go after people. He tries to dig the knife in where you’ll feel the most pain. This is his general operating procedure. When you disagree with him he wants to kill you.”

Westin was careful to say that his anger was directed at Cuomo and his administration, not the unions supporting him. “We all don’t need to agree. And we don’t agree on who should be governor. But we’re not trying to kill each other.”

Rebecca Katz, a senior strategist from the Nixon campaign, wrote in a statement that Cuomo is “putting his personal political ambitions over the needs of grassroots organizations fighting for racial and economic justice” and that “tells you everything you need to know about him. And it shows just how terrified he is of Cynthia Nixon.”

Gov. Cuomo’s campaign, meanwhile, denies that the governor’s actions led to the split in WFP.

Shortly after the New York Times story broke, the United Federation of Teachers and Transportation Workers Union each released searing statements attacking Lipton and WFP, the former of which called Lipton “delusional and misguided” and likened WFP to “children throwing a tantrum.”

Explaining their decision to pull-out of WFP, 32BJ SEIU president Héctor Figueroa and CWA Local 1 Vice President Dennis Trainor wrote in a joint statement that the WFP "was created by labor unions, community organizations and progressive activists to advance an agenda and elect candidates who improve the lives of working people. From raising the minimum wage to $15 an hour, to passing the strongest paid family leave program in the country, Governor Cuomo has delivered on that agenda."

They added that their unions "fundamentally believe that endorsing Governor Cuomo is the most effective way to put the interest of working families first. The latest developments show that the current leadership of the WFP disagrees with that approach, and we have been unable to convince them otherwise."

Representatives from both organizations declined to elaborate in time for publication as to whether they intend to stop funding community groups that endorsed Nixon. (Update: 32BJ SEIU sent a statement after this article was posted. The local says it does not fund community organizations directly, but does partner on issues of common interest, and provides staff and calls for member participation. Those partnerships will "not stop.")

Late on Friday, the Cuomo campaign announced that, following the split, the governor would no longer be seeking the endorsement of the WFP, a startling reversal after the party had endorsed Cuomo in both 2010 and 2014. As a result, Nixon will likely easily win the party’s endorsement.