“No More Racist Bosses”: Why Workers at a Suburban Target Store Are Protesting 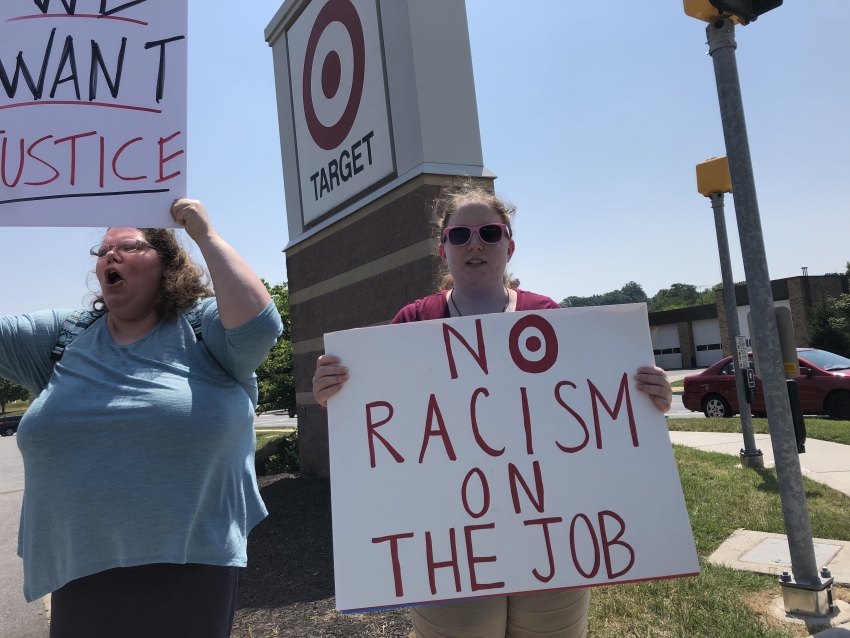 A small group of workers at retailer Target Corporation is demanding accountability from local store managers in the Baltimore area, highlighting issues of discrimination and fair scheduling that affect retail workers nationwide.

The workers at the Target outlet in suburban Cockeysville staged a demonstration this week, gathering support from the local labor rights community to demand that some managers be fired for allegedly racist and sexist behavior, and that the company address fair scheduling issues. Led by Target employees Erica Feldenzer and Sarah Shifflet, the group issued its demands July 3 as it gathered just inside the entrance to the store, and then led a walkout and picket that attracted unusual police attention.

The demonstration was partially inspired by a similar protest last year at a Target store in Christianburg, Va., Feldenzer reports. Adam Ryan, principal organizer of the Christianburg strike, helped the Cockeysville workers design their protest and traveled to Maryland this week to help lead the effort, which is intended to also include recognition of worker organizing rights at the non-union Target.

“We were successful enough [in Christianburg] that there is a lot of hope out there that direct action by workers” can be effective in altering Target’s corporate behavior, Ryan says. “I’ve heard from [Target] workers all over the county.” Bad managers were fired as a result of last year’s worker action in Christianburg, Ryan asserts, and even though efforts to form a union at Target have not progressed, the strike is being viewed as at least partially successful.

Under a bold red banner, “No More Racist Bosses,” the demands of the Cockeysville workers were voiced by Shifflet and written on a handbill distributed at the protest. The workers called on two managers "be fired on the grounds unprofessionalism in the workplace and making racist and ableist comments about team members repeatedly and talking down to team members." The handbill continues: "We demand that workers receive fair hours each week that they are not chronically scheduled outside of their availability."

The demands are audacious, Shifflett concedes, given that they have the open support of only a small percentage of the workers at the store. And Target Corporation itself is formidable indeed, with 1,829 stores nationwide and a total work force of more than 350,000. But the company appears to realize it has an overall problem with its workforce and has announced plans to raise wages across the country with the goal of reaching a minimum of $15 an hour by 2020.

In response to complaints at the suburban Baltimore store, Target spokeswoman Danielle Schumann tells In These Times leaders of the company "take any allegations of workplace misconduct seriously. We’ve been working for several weeks to address issues brought forth by team members ... and have already taken actions to address them. We will continue to work closely with this store's new leadership to ensure the team member experience meets Target's workplace standards.”

Shifflett and Feldenzer backed up their charges with a formal complaint to the National Labor Relations Board in June and say they are also planning a complaint to the Equal Employment Opportunity Commission (EEOC). “They are definitely trying to intimidate us. One of the managers … called me into his office and tried to interrogate me about the EEOC, I refused to answer any questions,” Feldenzer tells In These Times.

Intimidation was a tactic also employed against workers by Target in Christianburg, Ryan says. Ryan’s NLRB complaint against Target there took months to negotiate, he says, ending with a settlement this spring to foreclose any future violations of worker’s labor union rights. Efforts are ongoing there to form a workers committee that can deal effectively with the managers, he reports.

At the protest last week, Target employees were outnumbered by local labor activists who came out in support of the workers. Among them was Alan Rebar, an activist on the Baltimore Teachers Union who had been alerted to the Target action by the local chapter of the Democratic Socialists of America. “All working people need a living wage and trade union rights. I’ glad they are fighting racist bosses as well,” Rebar comments.

The Target employees on the informational picket were also outnumbered by local police. Early in the protest the Baltimore County Police Department deployed five squad cars to the scene and the officers claimed they were under the impression there was some sort of public danger attached to the peaceful protest.

Another Baltimore teacher at the protest was Mike Pesa, who is also active in the local chapter of the Industrial Workers of the World. “Retail workers at these giant companies like Target and Walmart are in desperate need of union representation,” Pesa says. “They deserve out support.”