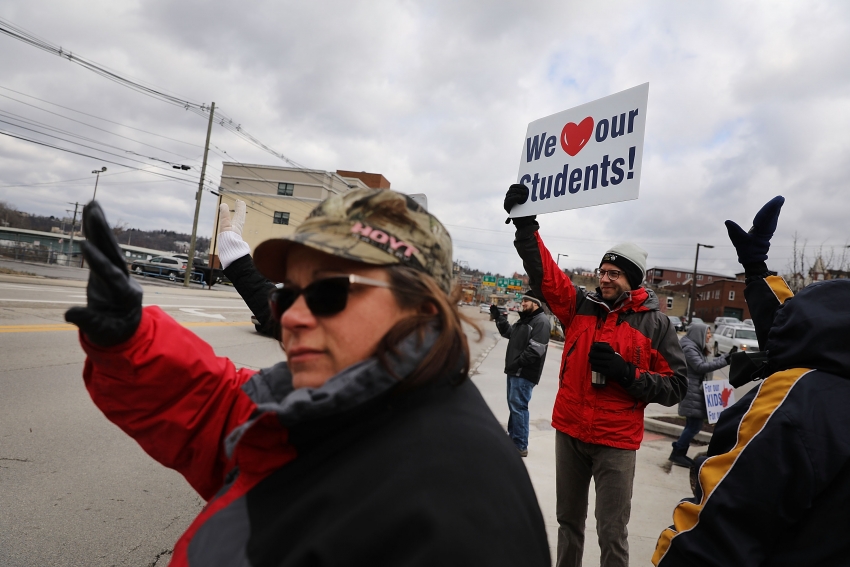 He was announcing the second statewide education strike in West Virginia in a year, alongside the leaders of the state’s two teacher unions.

The next morning, February 19, buses throughout the state sat idle in garages.

And by the middle of the day, strikers declared victory with the defeat of an anti-union, pro-privatization education bill in the state House.

West Virginia teachers emboldened educators across the country last year when they struck to defend their health insurance and win raises. But when the legislature returned this January, hostile legislators brought forward an omnibus education bill.

Although the bill also included pay raises, funds for rising health insurance costs, and more money for public education, educators weren't fooled. They could see it was designed to suck funds from public schools and open the door to privatizers.

After last year’s strike, members of both teacher unions formed the WV United Caucus to strengthen the connections they had built during the walkout.

Meanwhile union leaders were calling on voters to “remember in November,” but they failed to oust the Republican majority in either house of the legislature.

When word came down about the legislation, the caucus began a campaign to educate teachers and the community about how charters and ESAs move public money into private hands and undermine public education.

Since West Virginia doesn’t have charter schools, caucus members asked educators elsewhere about the effects of charters and ESAs. “Just like people learned from West Virginia, we learned from other states,” said Terri Engnoth, an English teacher in Mercer County.

The caucus designed pamphlets, held meetings in schools, leafleted the community, and held a webinar about the bill’s corporate backer, the American Legislative Exchange Council.

Meanwhile the state Senate, led by Senate President Mitch Carmichael, was pressing the 130-page legislation for a speedy approval.

Statewide elected union leaders encouraged members to contact legislators. Members and community supporters flocked to a hearing, where the voices against the bill far outnumbered those speaking for it—4 to 1 by some estimates.

Legislators angered educators by allowing speakers against the bill only 70 to 85 seconds to speak, while setting no time limits on speakers for the bill.

State union leaders worked with House members to modify the bill, and late last week were urging members to support a compromise. But the rank and file had a different message: “Kill the bill.”

Just like last year, county-level unions started taking their own strike votes, with Mingo County again the first to support a strike. Statewide leaders then initiated their own votes, which won overwhelming support.

As the bill went from the Senate to the House and back to the Senate, union members talked to each other about how and when to mobilize.

On the night of Sunday, February 18, the caucus invited West Virginia educators to join a phone call with teacher activists from other states, who reported on their own experiences with privatization, successful fights against charters, and the inspiration they drew from last year’s strike in West Virginia.

As these members were strategizing about what to do if the bill passed, things fell apart in the statehouse. The Senate was forcing votes on amendments that legislators had no time to read and refusing any compromises. Fed up and fearing a quick deal, at 6 p.m. on Monday, the state’s union leaders announced a strike for the next day.

That evening, 54 of the state’s 55 county superintendents announced school closures. Without buses, rural districts cannot keep schools open, so the role of the School Service Personnel Association was crucial.

But in Putnam County—which also happens to be in the district of the teachers’ top foe, Senate President Carmichael—the superintendent refused to close the schools and messaged workers to show up the next day.

‘By the way, strikes work’

Educators didn’t know how the community would respond when they walked a second time. But as it turned out, “that fear that we would not have community support—it was wrong,” Engnoth said. “We have pizza, chicken nuggets, and homemade cinnamon rolls. I think people are really proud of us.”

By midday Tuesday, with schools closed and hundreds of educators flooding the statehouse, the House of Delegates voted to table the omnibus bill indefinitely—effectively killing it.

Cautious that legislators might use parliamentary procedures to resurrect the bill the next day, union leaders announced the strike would continue for a second day to assure the bill was dead. Putnam County was once again the lone holdout, but union members again set up early-morning picket lines there. Once again, no buses rolled out.

There will be more fights ahead. But now “we have a whole state that understands the privatization agenda,” said Charleston English teacher Jay O’Neal. “And by the way, strikes work.” His message for union leaders and members: “Stop trying to lobby—we were doing that and it didn’t get us anywhere.”

Engnoth agreed: “Every vote went against us until we walked, and then we killed the bill.”

Barbara Madeloni is the Education Coordinator at Labor Notes. She recently served as president of the Massachusetts Teachers Association and is a longtime writer and educator.