When a Company Tries to Decertify Its Union 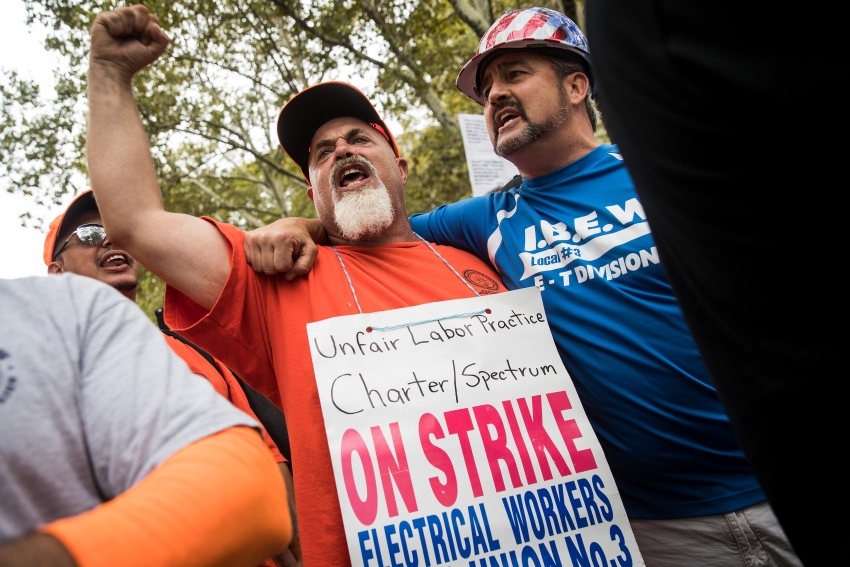 Members of IBEW Local 3 cheer during a rally of hundreds of union members in support of IBEW Local 3 (International Brotherhood of Electrical Workers) at Cadman Plaza Park, September 18, 2017 in the Brooklyn borough of New York City. (Photo by Drew Angerer/Getty Images)

Cable provider and mass media company Charter Communications, which offers its services under the Spectrum brand, is pushing to decertify the IBEW Local 3 union in New York City, whose workers have been on strike since March 28, 2017. Decertification votes are used by workers to get rid of a union or replace it with a different one, with the vote to get rid of IBEW Local 3 being pushed by replacement workers.

Roughly 1,800 workers represented by IBEW Local 3 went on strike over a contract dispute with Charter Communications, which bought out Time Warner Cable in May 2016. A majority of workers voted to authorize a strike in response to cuts to healthcare and pension benefits in the wake of the buy-out.

As the strike approaches two years, Charter Communications is advocating workers to vote to decertify the union with the National Labor Relations Board.

In an internal email from January 31, obtained by In These Times, Charter Communications Regional Vice President of New York City Operations, John Quigley, told workers, “In my opinion, Local 3 has not earned the right to represent you. Over the past several years they have mislead (sic.) their members, led them out on a strike without a clear plan, mishandled almost every aspect of the strike, made it very clear what they think of employees who are working with us today, and continue to make empty threats about harming our business.”

Quigley added, “we hope that you vote ‘no’ and give us a chance to continue to make Charter a great place to work-together.”

The email reveals that Spectrum encouraged its workers to get rid of the union. A Spectrum spokesperson told In These Times via email, “the vote is between our employees and IBEW Local 3. We have no further comment.”

“A standard tactic in a union-busting campaign is to be intransigent in bargaining and thereby provoke a strike, hire replacement workers who are eligible to vote, schedule a decertification election and hope the replacement workers vote in greater numbers than the strikers,” Catherine Fisk, a law professor at the University of California at Berkeley, told In These Times via email. “It illustrates the need for labor law reform that would permit workers to bargain and, if necessary, strike without losing their jobs and their rights to bargain collectively.”

The petition to decertify the union was filed with the National Labor Relations Board by Bruce Carberry, who the union alleges is a supervisor who transitioned to a survey technician role in order to file the petition and become a part of the bargaining unit represented by the union. Union members allege this individual was demoted for the purpose of undermining the union. Once a decertify petition is filed and approved with at least 30 percent of workers signing in favor, a vote is held where a majority determines the outcome. The vote went forward after negotiations to end the strike broke down in December 2018.

On his LinkedIn profile, Carberry lists his role as a supervisor until January 2018; the petition was initially filed in May 2018. Carberry began working for Charter Communications in May 2017, shortly after the union went on strike. Trump-appointed National Labor Relations Board (NLRB) regional director John Walsh approved Carberry’s petition to allow a decertification vote in June 2018 despite these allegations from the union that Carberry was ineligible to file the petition due to his supervisory position. The ruling explained the union did not prove Carberry was not in a supervisory role at the time of filing the petition, despite proving he served in a supervisory role prior to its filing.

If the vote passes to decertify the union, the outcome would essentially end the strike in Spectrum’s favor rather than continue to pressure Spectrum to make concessions in bargaining a new union contract. It's unclear how many replacement workers, permanent and contracted employees have been hired by Spectrum during the strike. When the strike first began, Spectrum’s contingency plan included hiring contractors from out of state and the company has recently been scrutinized by city officials for not hiring enough local labor.

The attorney representing Carberry and his petition, Matthew Antonek, has previously represented union busting efforts at Verizon as the company’s Executive Director of Labor Relations.

“He’s a union buster,” said Tim Dubnau, an organizing coordinator for the Communications Workers of America which has led efforts to unionize Verizon employees, of the petitioner’s attorney. “The labor law is completely broken in this country. It’s amazing how coercive employers can be and are.”

Since the petition went through, a campaign that includes an anti-union blog surfaced to try to sway workers to vote in favor of decertifying the union. One blog post includes ten reasons to vote "No," including claims the union hates current Spectrum employees, the union lies, and that workers would be better off without the union representing the workplace.

“Around the new year starting when the NLRB said the vote was going to go through, a charter tech blog showed up saying things like you can’t get anymore raises,” Chris Fasulo, a Spectrum worker on strike, told In These Times. “There are also a couple of Twitter accounts out there, all of a sudden they started trolling a lot of guys on strike like myself who are very outspoken on Twitter.” A Spectrum spokesperson denied the blog or accounts are affiliated with the company.

The NLRB sent out ballots to all eligible workers this month for the decertification election, which includes workers on strike and any hired before January 2019. Ballots were due February 22, and the outcome of the vote is not yet known.

“Even though none of these people are part of the union, the law seems to give them the ability to vote on whether or not a union should represent the workplace,” said Troy Walcott, a Spectrum worker on strike. “So while we’re out on strike all the people who are working in place of us who don’t have a union are now allowed to vote on whether a union gets to represent the workplace.”

He added a grassroots movement has started in the wake of the strike to create a publicly owned cable service in New York City. New York Governor Andrew Cuomo, and union leaders in New York have recently renewed calls to boycott Spectrum and its services over the company’s union busting. The company is currently in negotiations with the New York Public Service Commission to be able to continue providing cable services in New York State after the commission voted in July 2018 to revoke approval of Spectrum’s merger with Time Warner.

“The company is basically union busting in New York City, and they’ve come in, raised rates on people and set their own terms because they hold a monopoly right now and there’s really no one to stop them from doing what they’re doing,” added Walcott.