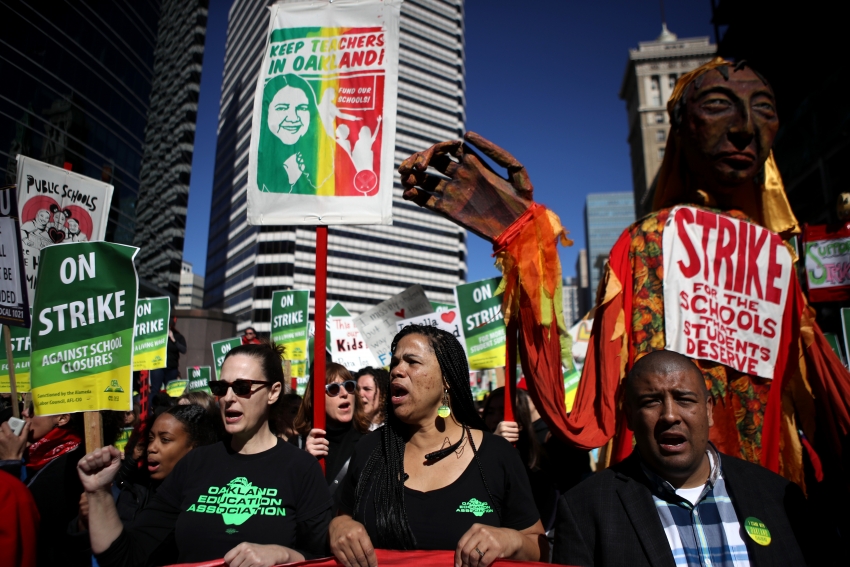 Though at first glance, the Oakland teachers’ strike, now in its seventh day, may seem simply yet another in the wave of teacher walkouts this year, it in fact represents a watershed in resistance to neoliberal economic policy. The strike in Oakland simultaneously mirrors and advances popular resistance across the country to austerity and “accumulation by dispossession”—the capitalist elite’s conscious transfer of wealth and power from us to them.

In one regard Oakland teachers’ demands—increased pay, investments in student services, smaller class sizes and an end to school closures—echo those in this year’s strike wave, a growing social movement led by teachers, with massive support of parents and community members, to save public schools from destruction by wealthy elites who have carried out a project attempting to “marketize” the education sector. This project includes an array of policies including the use of standardized testing which yields data to be bought and sold, the creation of charter schools controlled by networks of billionaire funders and the outsourcing of educational services.

Yet press briefings by the Oakland Education Association (OEA)—the union representing the teachers—and a website created by a community supporter, show an extraordinary shift: a fusion of attention to racial and gender justice alongside labor's mission to defend the dignity of work and workers. “It’s really, really exciting—a movement that is connecting the dots” observed Pauline Lipman, whose research on the racial significance of neoliberal school reform in Chicago helped inform the Chicago Teachers Union’s (CTU) widely-adopted template for union demands: “The Schools Chicago’s Students Deserve.”

The Oakland school district, like the Chicago Public Schools and urban school systems in most blue states are, as CTU researcher Pavlyn Jankov explains, “broke on purpose.” Local and state politicians, in conjunction with the corporate elite, have refused to pursue progressive taxation for public services and public employee pensions. In Oakland, these actors have trapped the city and its school system in the pattern Jankov identifies as “a cycle of broken budgets and a dependence on financial instruments” that exploit residents.

The “financial reality” that Oakland Schools Superintendent Kyla Johnson-Trammell and the system’s state-appointed trustee say confines the district’s capacity to meet the strikers’ demands is in part a result of mismanagement, including significant costs for consultants, but it is also a function of California’s method of funding schools. Oakland has been financially mismanaged because the state, charged with overseeing the budget, has permitted it to be so. Research has exposed the correspondence between real estate developers’ plans for new housing that will displace lower-income families, school closings and the opening of charter schools.

The crisis in affordable housing is caused by the same billionaires and politicians that are driving school privatization. Neoliberal education policies of “Democrats for Education Reform” are a companion to the economic policies that have been embraced by the Democrat Party establishment figures which Bernie Sanders assailed during his 2016 presidential campaign.

A number of school systems, including those in Newark, Detroit and Oakland, have suffered a double blow of impoverishment through deindustrialization and disenfranchisement via state takeovers. Though some Democrats may now understand privatization’s horrors, they still resist acknowledging the domestic colonization of communities of color that occurs when states deprive communities of electing their school boards.

Though OEA’s organization was rather shaky at the start of strike, longtime and newer union supporters, including members of the Democratic Socialists of America (DSA), helped pick up the slack. The alliance with community and parents, seen in West Virginia and Los Angeles, has developed into a partnership.  One factor explaining that’s often overlooked is Oakland’s rich, often-ignored history of radicalism, including the 1946 general strike and the emergence of the Black Panthers. These moments resonate for participants in the Oakland teachers’ strike, as the history of coal miners’ struggles has for West Virginia teachers.

The OEA has two resources that have not yet been tapped. One is the National Education Association affiliate, the California Teachers Association (CTA), to which the OEA belongs. Though CTA describes itself as “powerful and passionate,” those qualities have, as of yet, been missing in pushing state Democrats to intervene in the strike. As Jack Gerson, a longtime teacher union activist and Oakland resident explained, the “CTA has a history of a legalistic and cautious approach” and although they’ve been influenced by the strike wave, they have not yet changed their ways.

This description of CTA echoes the critique of teachers in the “red state” walkouts of their unions, symptomatic of business unionism. The CTA, like other NEA affiliates that have not been challenged by reformers, is reflexively bureaucratic, at times stifling local initiative and rank-and-file control of strikes.

Another untapped opportunity for strikers to pressure the Democrats to find the money and cease school closures is through support from other public employees, in particular unions that have tangled with the city, county and state over contracts and budgets. In West Virginia, school-employed bus drivers helped shut down the Putnam County school district. In Oakland, AC Transit workers refusing to cross the strikers’ picket lines are doing the same.

A key target for the strike could be the Port of Oakland, which is an essential economic hub in Northern California and the eighth largest container port in the United States. As University of California sociology professor Edna Bonacich explains in New Labor Forum, ports are "vital nodes in the system of production/distribution,” and "choke-points in the global flow of commodities.”

The OEA boasts strong support from the two locals of the International Longshore and Warehouse Union (ILWU) representing port workers. An alliance between the ILWU, the OEA and the community to shut down the Port would not only help win this strike, it could fundamentally alter Oakland’s overall financial situation.

The Oakland teachers’ strike is a watershed moment for U.S. labor and for the social movements that have taken to the streets to challenge Trump and the GOP’s policies. A victory would serve as a beachhead in creating the social movement we need to not just halt austerity, but to repossess the social gains being stolen from us.