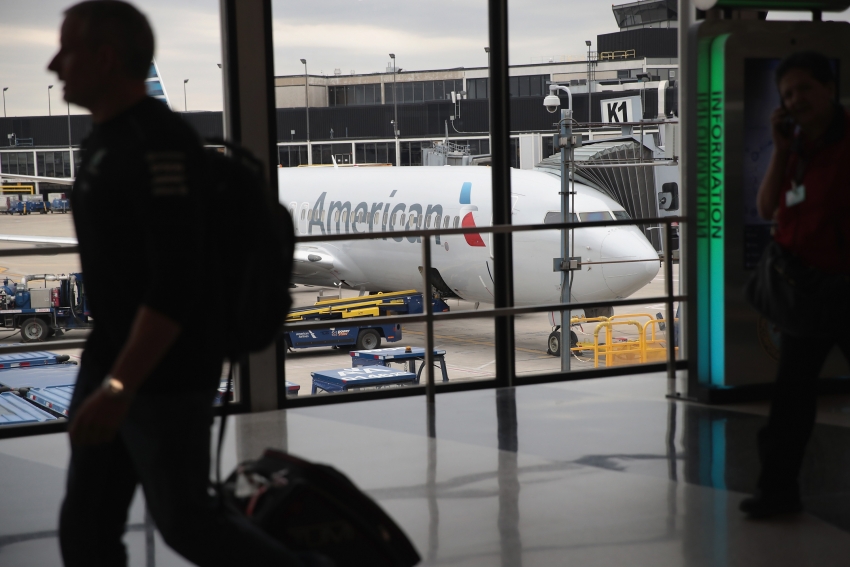 An American Airlines aricraft sits at a gate at O'Hare International Airport on May 11, 2018 in Chicago, Illinois. (Photo by Scott Olson/Getty Images)

Mechanics at American Airlines are threatening to strike if a new contract isn’t negotiated, and union president John Samuelsen has declared that employees are prepared for the dispute to erupt into “the bloodiest, ugliest battle that the United States labor movement ever saw.” The statement comes just one day after the airline sued its union workers, claiming that they had engaged in an illegal work slowdown to strengthen their hand at the bargaining table.

American Airlines merged with US Airways in 2013 to become the largest airline in the world. The 31,000 mechanics who fixed planes for both airlines had existing contracts, but the merger didn’t produce a joint contract. American Airlines mechanics had contracts with the Transport Workers Union (TWU) and US Airways mechanics had contracts with the International Association of Machinists and Aerospace Workers (IAM). American Airlines has been trying to update the collective bargaining agreement with the TWU-IAM Association (a partnership between the two unions that developed as a result of the merger), through contract talks since December 2015, with the National Mediations Board serving as a federal mediator between the two sides. But talks were suspended in April after reaching an impasse. In addition to issues of pay and benefits, the union is concerned that the company is potentially looking to outsource thousands of jobs.

Timothy KIlima is an Airline Coordinator for the IAM who has been personally involved with the negotiations. “The employees represented by the TWU-IAM Association want to preserve the work they do, the healthcare they have and to reach parity in benefits between the two pre-merger workgroups,” he told In These Times via email. “American Airlines demands to reduce the amount of work performed by their employees and a corresponding headcount reduction; to eliminate the better healthcare choices the employees already have; and refuses to improve the profit sharing formula that is one of the worst among their peers. In short, the employees desire to grow with a healthy American Airlines but at least want to keep what they have coming into the merger.”

On May 20, American Airlines filed a lawsuit in the Northern District of Texas federal court claiming that mechanics have purposely slowed down their work in an effort to hinder the company’s day-to-day operations. According to the lawsuit, the mechanics’ actions have resulted in 650 flight cancellations and over 1,500 maintenance delays since February.

The union denies that there was ever a purposeful slowdown. “American Airlines should focus its time and effort to reach contractual agreements with its employees instead of falsely accusing them of trumped-up job action charges,” said Klima. “Collective bargaining agreements cannot be reached in courtrooms, in the media or by lobbying politicians. The TWU-IAM Association is eager to return to the bargaining table, which is the only arena where our contract disputes can be resolved.”

Vermont Senator and Democratic presidential candidate Bernie Sanders also criticized the legal action, tweeting on May 21, “Instead of recognizing and addressing the concerns of workers, American Airlines has moved to sue @MachinistsUnion. Machinists keep passengers safe and on time. My message to American Airlines is simple: Stop the intimidation and bullying!”

On May 21, during one of the airline’s regular town hall meetings with employees at LaGuardia Airport, TWU president John Samuelsen confronted American Airlines president Robert Isom and told him that the union was prepared to strike. “I stand here to tell you—in front of this whole room, in front of everybody, anybody who’s listening—that you’re not going to get what you want,” said Samuelsen. “If this erupts into the bloodiest, ugliest battle that the United States labor movement ever saw, that’s what’s going to happen. You’re already profitable enough.”

Samuelsen also told Isom that workers are desperately trying to avoid what’s called a “self-help” situation under the Railway Labor Act. That means the company would be able to force employees into a contract without union approval if the government condones it. “If we ever get to a point where there’s self-help, we are going to engage in an absolutely vicious strike action against American Airlines to the likes of which you’ve never seen,” said Samuelsen. “Not organized by airline people, but organized by a guy that came out of the New York City subway system that’s well inclined to strike power, and who understands that the only way to challenge power is to aggressively take it to them. … We’re going to shut this place down.”

Isom replied, “I will tell you this, that anybody that seeks to destroy American Airlines, that is not going to be productive. It just won’t. We have to be able to work together to see the views of both sides. And I, believe me, I will send people back to the table."

The airline industry has seen its share of labor unrest over the last few years, and workers have been able to celebrate a number of organizing victories. The American Airlines battle mirrors the recent fight between Southwest Airlines and the Aircraft Mechanics Fraternal Association (AMFA). In March, Southwest sued the AMFA and alleged that workers had participated in an illegal slowdown, but employees were ultimately able to win an agreement that established pay raises, new bonuses and an end to the legal dispute. Last year, JetBlue flight attendants voted to unionize, and in February the Association of Flight Attendants (AFA-CWA) helped end Trump’s government shutdown by threatening to strike.

Organizing efforts have been met with extreme resistance from the airlines beyond the aforementioned lawsuits. In February, The Guardian revealed that JetBlue president Joanna Geraghty sent employees an email warning that the company would cease to be successful if workers unionized. “So if anyone asks you to sign a card, I’m asking you to decline,” the email eads. This month, details of Delta’s union-busting campaign emerged, which included breakroom literature encouraging workers to spend their money on video games and alcohol rather union dues.

According to The International Air Transport Association, the airline industry is expected to generate net profits of $35.5 billion in 2019, better than the $32.3 billion netted in 2018. American Airlines is the world’s largest airline. Its parent organization, American Airlines Group, reported a fourth-quarter 2018 pre-tax profit of $387 million. “We expect our total revenue per available seat mile to grow faster than our network competitors, and to deliver strong pre-tax earnings growth in 2019,” the group said in a statement.

Last week, the TWU-IAM Association sent a letter to the National Mediation Board calling on the agency to compel further negotiations between the two sides, as the company has refused to engage in talks without a mediator. “These negotiations have reached the critical end stage with the largest scope and economic issues yet to be resolved,” reads the letter.