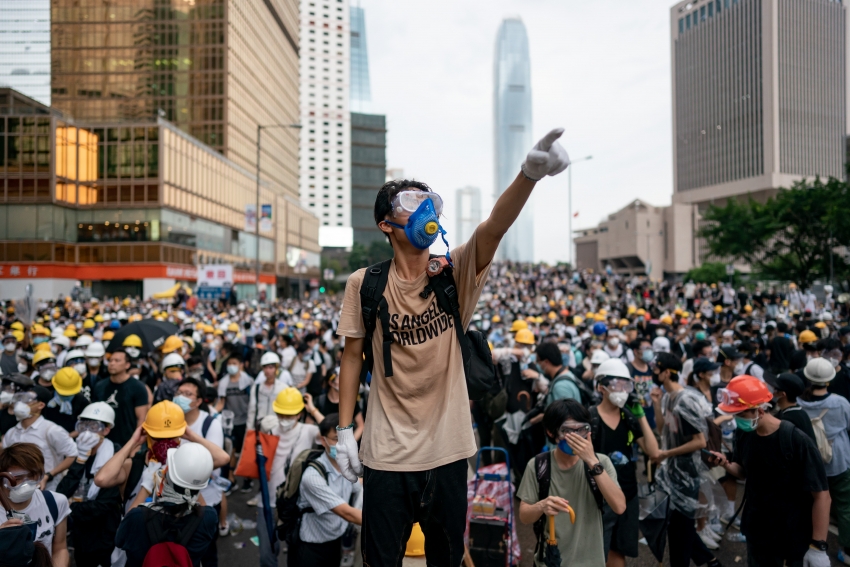 A protester makes a gesture during a protest on June 12, 2019 in Hong Kong, China. (Photo by Anthony Kwan/Getty Images)

Just as the “Made in China” label insinuated itself into our retail stores in the 1980s, China today insinuates itself into most of our mainstream news coverage, as one of the largest global markets, the top carbon emitter, the biggest workforce, and the biggest geopolitical rival to the United States in recent memory. For Americans, seeing U.S. dominance in the headlines displaced by an upstart rival superpower can be humbling—or terrifying.

As Max Elbaum and Calvin Cheung-Miaw pointed out in a recent In These Times article, it's hard to know what to make of China from the left: Is China Washington's national-security boogeyman, a neoliberal dystopia or a capitalist success story? In China’s economic transformation, many moderates and conservatives see a validation of the idea that economic modernization automatically spurs social modernization. Some on the Left see a giant counterfactual of a revolution betrayed: They ask, What if the 'socialist' state had not embarked so dramatically on its "reform and opening up' in the late 1980s, trading social freedoms for economic advancement and growing inequality?

But China shouldn't be viewed by leftist observers simply within the frame of a nation-state. After all, between China and the U.S., the two most influential working classes in the world live parallel lives that are increasingly interconnected through trade, migration, and cultural and intellectual exchange.

The economic ascent of China makes both the right and the left nervous for different reasons, which often have more to do with the U.S. economy’s own insecurities than China itself. Yet the U.S. and China have much in common, including their contradictions. The ruling elite of both countries are on the same side, and workers of both nationalities are backed up against the same wall: We’re all fighting for dignity under two governments that routinely abuse their power, and wield cultural, economic and legal power to blunt their constituencies’ political consciousness.

Beijing and its propaganda organs have fashioned an image of China as a seamless, stable polity with little need for democracy so long as the country continues to prosper. There's an element of truth in this portrait of stability above all, but that political stasis has been achieved through suppression of domestic dissent and breakneck global economic expansion. At the same time, the country's nascent activist movements have evolved on their own trajectory on the mainland and across “greater China.”

In the past few weeks we’ve seen Beijing losing its grip on its most restive territory, as the streets of Hong Kong flooded with protesters rallying against a draconian extradition law that would give Beijing carte blanche power to render political enemies to the mainland. While Chinese on the mainland were largely kept in the dark about the protests in the territory, Hong Kong’s youth have their eyes wide open. The street demonstrations have been escalating since June, following commemorations of the 30th anniversary of the infamous Tiananmen Square massacre. There’s a sense, perhaps, that it’s incumbent on the youth of Hong Kong to carry on a legacy of dissent in China that those living under Beijing’s rule are not free to do. Yet they’re also responding to their material conditions, frustrated by the island’s massive inequality and dismal job prospects in an economy rapidly becoming eclipsed by its mainland cousin.

Fear of China’s political and economic dominion has also prompted the Taiwanese to assert their sovereignty despite the precarity of the island's unresolved legal status. Though Taiwan remains politically marginalized in international politics, it has over the past two generations built a distinct identity as a pluralistic electoral democracy, and the 2014 student uprising known as the Sunflower Movement helped thwart a major trade agreement with the mainland. It recently became the first Asian country to honor same-sex marriage rights after multiple efforts in the legislature and the courts.

Although these developments in Hong Kong and Taiwan are on the periphery of “greater China,” Beijing’s reaction has been telling. The central government retreated from its support for the extradition bill following the protests, siding, at least for now, with the Hong Kong government's decision to shelve the measure. (As of this writing, however, Hong Kong has not completely withdrawn the initiative, and Beijing has made unprecedented overtures toward deploying military force to maintain order.) But public outcry has continued, along with calls for Lam to resign. In Taiwan, Beijing has actually attempted, awkwardly, to take credit for the progressive victory on LGBTQ rights in Taiwan by painting it as part of the People’s Republic. These face-saving measures hardly signal support for genuine democracy on Beijing’s part. Nonetheless, the fact that these messages were projected both to mainlanders and the outside world reveals that Beijing is responsive to unrest at the edges of its claimed territory and anxious about maintaining legitimacy inside and outside its borders.

On the mainland, the most energetic social movements have centered on grievances over material living conditions—wage theft, eroding pensions, environmental pollution, corruption and gender inequality. While formal collective-bargaining rights remain out of reach for countless rank-and-file workers, the regularity of labor protest indicates people's intuitive consciousness of social fairness and willingness to take direct actionon grievances.

Labor unrest does not always have an ideological bent, and agitation against political repression does not necessarily speak to working-class grievances. But uprisings of all kinds have a mutual political synergy. Even the monstrous mass incarceration of Uighur Muslims in Xinjiang is more than a brutal ethnic cleansing campaign: The development of Western China, as a back-channel to Europe and the Middle East, through the expropriation of the region's mineral resources is critical to China’s economic agenda. The concentration camps are the culmination of years of brutal suppression and disfranchisement of Uighur communities, undertaken in part through the social and economic dominance of the majority Han Chinese in the region. The violent enforcement of this social hierarchy was foreshadowed bylabor clashes and ethnic riotsa decade ago. Though the repressive political atmosphere provides limited channels for explicitly political forms of rebellion, quieter modes of subversion have persisted, including clandestine efforts to circumvent internet censorship, which prove that the so-called Great Firewall cannot seal off a burgeoning community of savvy “netizens.”

What does this mean practically for progressives outside of China? Today, geopolitical barriers preclude many forms of large-scale transnational collaboration between mainland China and the U.S. There were fleeting efforts to build transnational union solidarity in the late 2000s, with a few stage-managed “high-level talks” between SEIU-affiliated Change to Win coalition and the official state-run All-China Federation of Trade Unions. However, these talks were primarily public-relations exercises and failed to create a durable vehicle for labor internationalism.

A new kind of internationalism surfaced last year, with the student-labor organizing movement that mobilized in defense of aggrieved workers at the Jasic Technology factory in Shenzhen. The group's militant direct actions sparked a wave of international attention, with support campaigns and petitions launched by unions in Europe, North America, Hong Kong, Philippines, and South Korea. The scrappy campaign, led by a small cadre of students armed with Marxist slogans, showed how some organizing campaigns, particularly those that marshal the collective power of youth and rank-and-file workers, can capture international media attention and spark global labor solidarity. Similarly, subversive transnational cooperation on GitHub's programming communities has mushroomed into a subsurface resistance campaign against oppressive working conditions for mainland coders. The world of digital labor is chipping away at the Great Firewall. How can we harness the political networks that emerge at its far edges?

And one common struggle is too big to ignore: Workers everywhere are grappling with the climate crisis, and China and the U.S. are collectively responsible for over a third of the world’s carbon emissions. Finding a way to rebuild the world's two dominant economies in a manner that gives workers a leading role in transitioning toward a sustainable, zero-carbon future, is a social imperative for labor movements and policymakers of both nations. A promising development—Trump's current tariff war notwithstanding—is the growth of international civil society cooperation on environmental problems, along with mutual technology transfer for renewable energy development. It is incumbent on labor and environmental advocates here to help channel such alliances into a transnational dialogue on climate justice.

There are political impulses in China that the state cannot contain, coopt or absorb. We should read this, on our end, as proof that people power persists, and that the public’s sense of social justice and equality before the law doesn’t atrophy in the absence of representative government. People act politically even in the absence of electoral democracy; they just become more creative, less reliant on legal channels to offer relief, and more passionate about taking direct action. We can remain warily optimistic that, regardless of the system of government that rules over them, workers and civil society are still the force from which even the most powerful states derive legitimacy. Beijing is bent on achieving “territorial integrity,” but for ordinary Chinese people, perhaps unity is forming along different lines: not the integrity of borders, but the integrity of freedom.