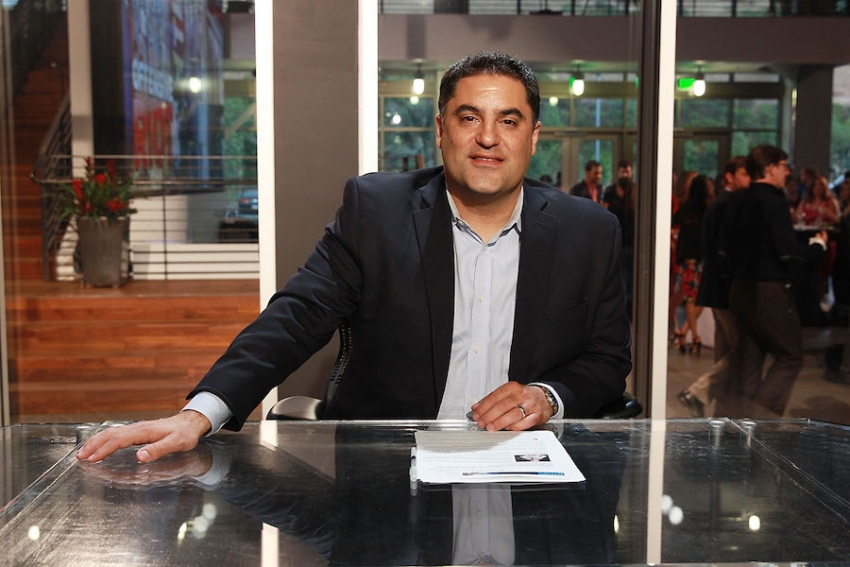 The union has charged Young Turks boss Cenk Uygur with firing an employee and withholding raises in retaliation for the union drive. (Photo by Joe Scarnici/Getty Images for The Young Turks)

A contentious union campaign by the staff of the progressive news network The Young Turks (TYT) is growing even more combative. Today, the union filed two separate unfair labor practice charges alleging that the company and its CEO, the popular liberal media figure Cenk Uygur, withheld wage increases and bonuses from employees as a result of the union drive, and that they fired an employee as retaliation for union activity—charges that Uygur denies.

On February 12, about 15 TYT employees announced their intention to unionize with IATSE. They expected to gain voluntary recognition from their famously liberal employer through a simple check of union cards, but were spurned. The company insisted on holding a secret ballot election at work in order to recognize the union, a tactic typically considered to be anti-union. (Uygur disputed this, telling In These Times that “Voluntary recognition means any recognition process outside of an NLRB election.” But card check is generally understood to be what unions mean by “voluntary recognition.”)

In a tense staff meeting held the same day, Uygur urged staffers not to unionize, saying a union would be unsustainable given TYT’s perilous financial position. Uygur’s position on the union has been widely criticized as hypocritical, coming from a man who made his name as a champion of progressive causes. TYT bills itself as the largest online news show in the world, with more than 200 million views per month.

Uygur, who at the time was running for Congress in California’s 25th district, also suggested that the union fight was politically motivated, since IATSE was endorsing one of his opponents in the race. On Tuesday, Uygur lost the race, coming in fourth with about 5% of the vote.

An employee of TYT involved in the union effort, who asked to remain anonymous out of fear of retaliation, said that the workers’ annual discretionary raises—which represent a significant amount of money in a workplace where pay is already low—were scheduled to go into effect at the same time the union drive was announced. Shortly afterwards, according to the worker, employees involved in the union drive were told that "they were gonna have to delay our raises and bonuses until the union stuff got sorted out.” The worker said that employees who are not in the proposed collective bargaining unit did get their raises.

One unfair labor practice charge filed at the National Labor Relations Board by IATSE today says that TYT is guilty of “withholding predetermined wage increases and bonuses in response to a Union’s demand for voluntary recognition.” Uygur said that the company was simply maintaining the status quo while the union drive was active. “Frankly, we can’t win, because we all know that if we gave the raises, IATSE would be accusing us of bribing employees not to support the union,” he said. “If IATSE doesn’t object to TYT giving the raises, we would be more than happy to do so.”

The employee fired today was Jacorey Palmer, a technical director who occasionally appeared on the show as well. Palmer said that he was the employee who was “reprimanded” by Uygur for smiling during the meeting when the union was first announced, an incident reported by Huffpost. “His first day back acting as head of the company, after his congressional campaign ended, he fired me with no clear explanation,” Palmer said. “I have no doubt that this was in connection to my coworkers and I organizing for a voice at work. It was meant not only to remove a perceived trouble maker but also as a warning shot to my coworkers. Without a doubt, this was retaliatory.”

“Throughout my time at TYT I had made myself known as someone unafraid to vocalize injustices, especially in cases for fair treatment for my coworkers,” he added. “I found management very abrasive each time I tried to voice concerns my co-workers had brought to my attention. Each time I hoped their progressive politics would govern their response and each time I was wrong.”

Uygur said the company had “no knowledge regarding the employee’s support for the union or lack thereof,” and that the firing was justified. “TYT’s practice is to refrain from sharing details regarding personnel matters.  However, since IATSE has accused us of wrongdoing, we will respond in this case,” Uygur said. “There was an employee fired this week for violating the Company’s anti-harassment policy. TYT’s ongoing engagement with this employee and disciplinary warnings regarding his misconduct date back several months, predating any communications from the union. Recently, we received several new complaints regarding the employee’s behavior from that former employee’s colleagues. The complaints were fully investigated and the Company took appropriate action.”

In response, Palmer said, “All of the incidents they are referring to are incidents of me speaking up for my coworkers about injustice in the workplace.”

The uproar over the raises and the dismissal has only added to the level of dissatisfaction inside TYT. Employees are also upset that the company is trying to reduce the size of the bargaining unit. Uygur said the company’s request was “reasonable and customary,” but the TYT worker calls the idea of taking anyone out of the proposed union “a no go for us.”

The events of this week have only strengthened the resolve of the employees to win a union. “If the company is gonna punish us,” the TYT worker said, “that just underscores why it's important for us to organize.”