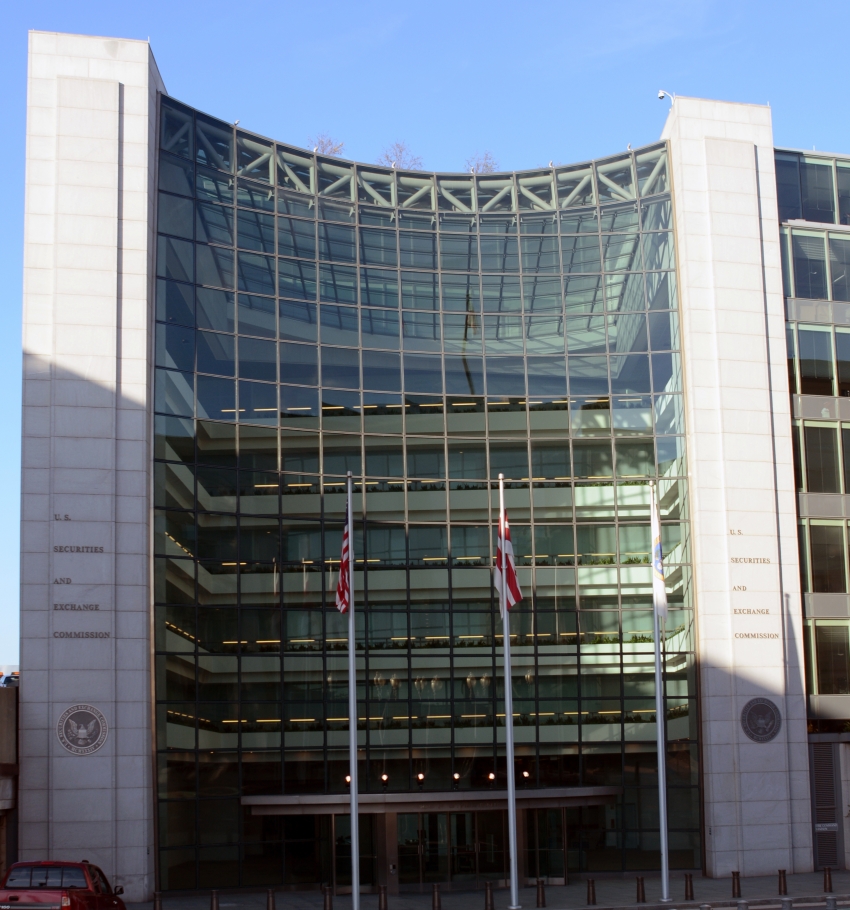 In a report by the Project on Government Oversight in 2013, more than 400 SEC alumni said they filed roughly 2,000 disclosures forms on behalf of another client rather than the SEC. (D. Ramey Logan / Wikimedia Commons)

The SEC’s Danger of Regulatory Capture

How the “cozying up” at the SEC is just another example of regulatory capture.

Such "cozying up" is the definition of regulatory capture. We can at least thank the SEC for providing such an easy-to-understand illustration of how it operates.

The phrase “regulatory capture” shrouds a serious problem in vaguely academic jargon, making it seem like unimportant esoterica rather than anything noteworthy. But the phenomenon that the euphemism represents is, indeed, significant: When a government agency is effectively captured by—and subservient to—the industry that agency is supposed to be objectively regulating, it is a big deal.

A perfect example of regulatory capture came earlier this month from the Securities and Exchange Commission—the law enforcement agency that is supposed to be overseeing the financial industry.

As part of that responsibility, the agency's top financial examiner, Andrew Bowden, warned last year of rampant fraud, corruption and abuse in the private equity industry, which today manages tens of billions of dollars of public pension money for states and cities across the country.

“When we have examined how fees and expenses are handled by advisers to private equity funds, we have identified what we believe are violations of law or material weaknesses in controls over 50 percent of the time,” Bowden said in that 2014 speech.

That, unto itself, doesn't sound like regulatory capture—in fact, it sounds like quite the opposite. But that's just the prelude to the real story.

Less than a year after raising those red flags, Bowden appeared at a Stanford Law School conference that the school said was designed “to encourage dialogue among the SEC; academics (and) members of the private equity and venture capital industries.” At the March event, Bowden was caught on film expressing his deep affinity for the same industry he had only months before said was plagued by rampant corruption.

“This is the greatest business you could possibly be in—you’re helping your clients,” he said. “The people in private equity, they’re the greatest, they’re actually adding value to their clients, they’re getting paid really really well.” Bowden then added: “I have a teenaged son, I tell him, “Cole, you want to be in private equity. That’s where to go, that’s a great business, that’s a really good business. That’ll be good for you.” That aside was met with an audience member telling Bowden: “I’d love to hire your son.”

Upon seeing the video, former bank regulator William Black wrote: “I would have asked for the resignation of any of my staff who made remarks even remotely like Bowden’s remarks. As financial regulators, particularly if we have the disadvantage of coming from the industry, we maintain at all times a professional distance from those we regulate. The remarks about his son are so beyond the pale that they demonstrate he is incapable of even pretending to maintain such a professional distance. His cheerleader nature is on full display.”

In 2013, the nonpartisan Project on Government Oversight published a study showing that “more than 400 SEC alumni filed almost 2,000 disclosure forms saying they planned to represent an employer or client before the agency.” In light of that, financial expert Yves Smith, who first flagged the Stanford video at her website Naked Capitalism, said Bowden's comments spotlight a deeper problem at the agency.

“Bowden’s most attractive career option, assuming he does not move into a more senior role at the SEC first, would be to join a private equity firm as a chief compliance officer,” she wrote. “The fact that Bowden made such an unabashed statement of his real loyalties, to his future meal tickets, is a strong and troubling sign that this sort of cozying up is a non-issue at (the) SEC.”

Such “cozying up” is the definition of regulatory capture. We can at least thank the SEC for providing such an easy-to-understand illustration of how it operates.