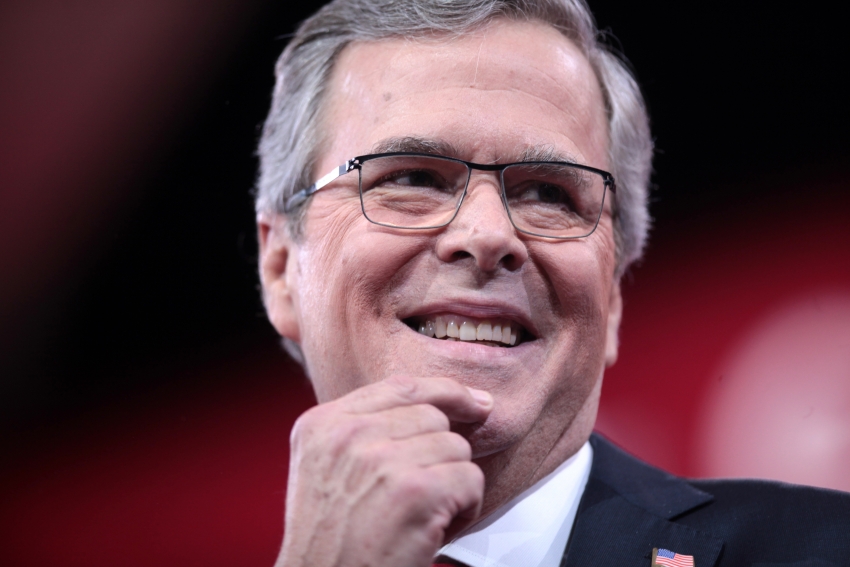 Bush’s presidential campaign announcement was high on the rhetoric. Unfortunately, it was also inconsistent with everything we already know about Jeb Bush.

Bush also slammed “pampered elites” and insisted he is “not just another member of the club." Those lines, of course, came from the millionaire grandson of a senator, son of a president and brother of another president.

Presidential campaign announcement speeches typically rehash well-worn themes politicians have long championed. They rarely include shockers or attempts to wholly redefine a candidate. Not so for former Florida Gov. Jeb Bush—his announcement address at Miami Dade College this week was an extreme makeover that included passages that likely had America doing a double take.

To start, Bush slammed politicians for being too close to what he called Washington’s “swarms of lobbyists.” Yet, Bush has relied on that multibillion-dollar influence industry to bankroll his political campaigns.

The New York Times reports that during his campaigns for Florida governor, “Bush received at least $237,000 from hundreds of lobbyists, lawyers, political consultants and others in the capital.” In his presidential run, the Times also notes, he has already held “seven private fundraisers and meet-and-greets in the Washington area,” proof that “he seems to have mastered a skill that is crucial in this city: tapping into the money-raising clout of the K Street lobbyists.” The Washington Post followed up with a lengthy list of lobbyists now working to help Bush win the Republican presidential nomination.

Bush also slammed “pampered elites” and insisted he is “not just another member of the club.” Those lines, of course, came from the millionaire grandson of a senator, son of a president and brother of another president. Later in the speech, in fact, Bush actually highlighted part of that biography, noting that he is “a guy who met his first president on the day he was born and his second on the day he was brought home from the hospital.”

Bush highlighted education, which he considers one of his signature causes when he was governor of Florida. But in his presidential campaign speech, he veered away from his own record, insisting he believes that “every school should have high standards, and the federal government should have nothing to do with setting them.” That declaration came from the same politician who has been an outspoken supporter of his brother’s No Child Left Behind Act, which included a host of controversial federal education mandates. Additionally, Bush has been a strong supporter of Common Core education standards, which have been pushed—and financially incentivized—by the federal government.

Then there was Bush’s criticism of President Obama. He said “it’s still a mystery to me why, in these violent times, the president a few months ago thought it relevant at a prayer breakfast to bring up the Crusades.” That seems straightforward, except that Bush did not mention similar concerns when his brother, George W. Bush, made headlines for using the term “crusade” to describe his invasions of Muslim countries.

Bush also criticized the Obama administration for having “failed to be the peacemakers” in international affairs. But, of course, Bush is the brother of a president who initiated two wars —including the longest in modern American history—and who was, in the estimation of some critics, responsible for helping create the Islamic State group. Bush has been a supporter of those policies, which few describe as “peacemaking.” And let's remember: Bush's support hasn't been tepid. Indeed, he recently reiterated that he would have authorized the invasion of Iraq, and said of his brother’s war policies: “News flash to the world: If they're trying to find places where there's big space between me and my brother, this might not be one of those.”

Give Bush credit for one thing: He did not offer voters a run-of-the-mill speech. He delivered a tour de force of sheer audacity. The trouble is, it’s the kind of audacity that assumes America will never bother to consider even the most basic facts about Jeb Bush.