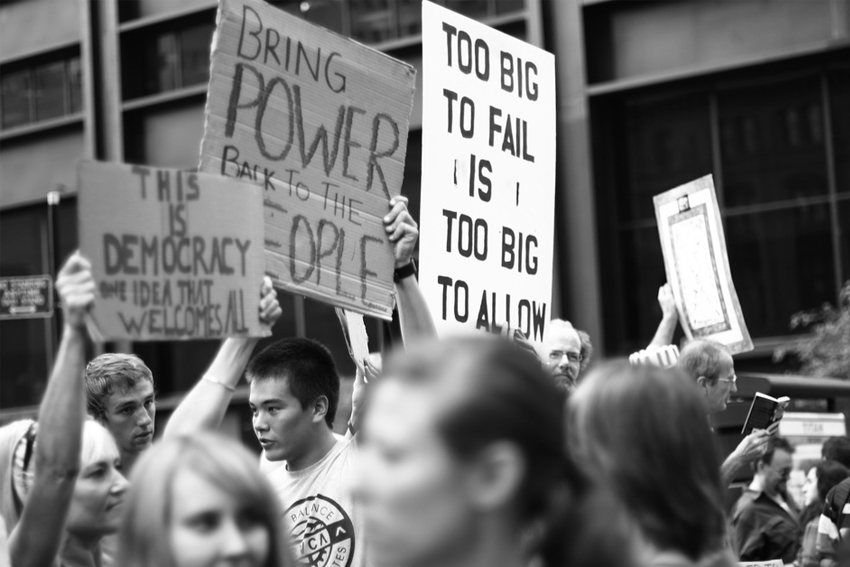 In 2012, President Obama pledged to “hold Wall Street accountable” for financial misdeeds related to the financial crisis. But as financial industry donations flooded into Obama’s re-election campaign, his Justice Department officials promoted policies that critics say embodied a “too big to jail” doctrine for financial crime.

Just a few years after the financial crisis, a new report tells an important story: Federal prosecution of white-collar crime has hit a 20-year low.

The analysis by Syracuse University shows a more than 36 percent decline in such prosecutions since the middle of the Clinton administration, when the decline began. Landing amid calls from Democratic presidential candidates for more Wall Street prosecutions, the report notes that the projected number of prosecutions this year is 12 percent less than last year and 29 percent less than five years ago.

“The decline in federal white-collar crime prosecutions does not necessarily indicate there has been a decline in white-collar crime,” Syracuse researchers note. “Rather, it may reflect shifting enforcement policies by each of the administrations and the various agencies.”

Underscoring that assertion is a recent study by researchers at George Mason University tracking the increased use of special Justice Department agreements that allow corporations—and often their executives—to avoid being prosecuted. Before 2003, researchers found, the Justice Department offered almost no such deals. The researchers report that from 2007 to 2011, 44 percent of cases were resolved through the deals—known as deferred prosecution agreements and non-prosecution agreements.

In 2012, President Obama pledged to “hold Wall Street accountable” for financial misdeeds related to the financial crisis. But as financial industry donations flooded into Obama’s re-election campaign, his Justice Department officials promoted policies that critics say embodied a “too big to jail” doctrine for financial crime.

In a 2012 speech, for example, the head of the Justice Department’s criminal division, Lanny Breuer, said “collateral consequences of an indictment,” such as layoffs, losses for corporate shareholders and the health of an industry, factor into the Obama administration’s prosecutorial decisions.

“In reaching every charging decision, we must take into account the effect of an indictment on innocent employees and shareholders,” said Breuer.

Similarly, in 2013, Obama’s attorney general, Eric Holder, told congressional lawmakers that when it comes to banks, “I am concerned that the size of some of these institutions becomes so large that it does become difficult to prosecute them.” He said there is an “inhibiting impact” on the Obama Justice Department’s willingness to prosecute a bank when bringing a criminal charge “[would] have a negative impact on the national economy.”

Holder’s 2013 comments were foreshadowed by a 1999 memo he wrote as deputy attorney general during the Clinton administration. In it, Holder recommended that prosecutors consider “[c]ollateral consequences, including disproportionate harm to shareholders and employees not proven personally culpable” before attempting to convict corporations for wrongdoing.

In May, the House Financial Services Committee subpoenaed the Justice Department about the policy. A press release from committee chairman Jeb Hensarling, R-Texas, asserted that the Obama administration was “stonewalling” in providing more details about “whether decisions are being made to prosecute or not prosecute financial institutions based upon their size.”

Prior to serving in the Obama Justice Department, both Breuer and Holder worked at white-collar defense firm Covington & Burling. Both of them went back to work for the firm again immediately after leaving their government posts.

“People tend to undervalue what we did with the banks,” Holder told the Financial Times. “Given the nature of the penalties that were extracted, given the interactions that we had with people at the banks, with those attorneys who represented the banks, I think the cultures have changed.”

Left unexplained is how those cultures have supposedly changed when many of the same individuals who were involved in the financial crisis have managed to avoid any punishment.