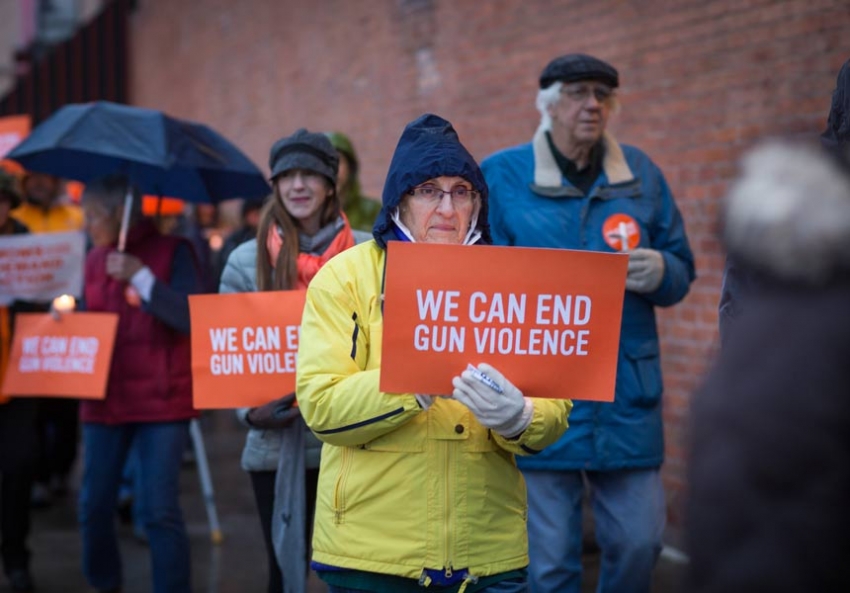 The Montana Chapter of Moms Demand Action march in Missoula on the anniversary of the Sandy Hook shooting. (Julia Starrett 2015)

More than 300 people packed city council chambers in Missoula, Mt., on Oct. 19, 2015, for the first hearing on an ordinance that would require background checks on most gun sales and transfers. Speakers snaked 30 yards down the hallway, weaving between audience members who stood four and five abreast.

The lead sponsor of the ordinance, first-term City Council Member Bryan von Lossberg, sat with his hands calmly folded at a long table with other members of the 12-person council. His body language betrayed no anxiety, but appearances can be deceiving. He had received a threatening anonymous voicemail prior to the meeting, and had asked the chief of police to staff the proceedings with an undercover officer.

“This is the most emotionally wracking, stressful experience I’ve ever had on the City Council,” he told In These Times after the four-hour hearing. “I look across the breakfast table at my wife and 3-year-old and ask, ‘Why am I touching this?’ ”

Von Lossberg’s trepidation is understandable in a Western state where nearly 53 percent of residents—the sixth highest rate in the nation—own guns, according to a 2015 study. Montana, along with seven other Western states, received a failing grade this year from the Law Center to Prevent Gun Violence, an advocacy group that evaluates state and federal gun-safety policy.

Background checks are required under federal law for all gun sales completed through a dealer with a Federal Firearm License—over 78,000 dealers nationally and more than 1,200 in Montana. But Montana does not require background checks for “private parties”—sellers who aren’t federally licensed but may still do a brisk trade—nor does it limit the number of firearms purchased at one time. The state ranks fifth nationwide in gun deaths per capita, at nearly 17 per 100,000 residents.

According to the law center, eight states require background checks in all gun transfers, a far stricter standard than federal law. In these states, there are 38 percent fewer deaths of women shot by intimate partners, as well as lower rates of gun suicides and aggravated assaults with firearms.

According to FBI data, obtained by the national organization Everytown for Gun Safety through a public records request, 17,800 gun sales in Montana were blocked between 1998 and 2014 due to checks by federally licensed sellers. The Missoula ordinance would expand these checks to cover most private sales and transfers. But the path toward tighter gun regulations can seem like a quixotic journey in the West, even in liberal Missoula, home of the University of Montana.

“The topic is almost taboo in Montana,” von Lossberg explains over coffee in downtown Missoula. “For some people, it approaches a religious matter, and the angriest voices are usually the loudest.”

Yet proponents of the ordinance, including volunteers associated with the local chapter of Moms Demand Action for Gun Sense in America, believe that a municipal approach could represent a new and effective strategy for passing gun safety laws in gun-friendly states.

Kim Rudolph, a 28-year-old mother of two, volunteers her time doing national survivor outreach for Moms Demand Action. Rudolph was 7 when her classmate, Jeremy Bullock, was fatally shot outside Margaret Leary Elementary School in Butte. She was holding a door for other students as they entered the building, roughly 20 feet from where the shooter, a 10-year-old, fired a gun three times.

Rudolph carried this memory with her for 21 years before she began volunteering for Moms Demand Action after the massacre at Sandy Hook Elementary School in December 2012. A gun owner herself, Rudolph is quick to reassure those who might be wary of background checks.

“We’re not trying to take away firearms,” she explains. “That’s the big thing.”

“A background check takes about 90 seconds,” says Rudolph. “Is 90 seconds worth it to save a life?”

But the ordinance’s opponents argue that a falling gun homicide rate nationally disproves a correlation between gun violence and gun availability. The homicide rate has fallen 49 percent between 1993 and 2010 while the total number of guns in the United States has increased from 242 million in 1996 to 310 million in 2009.

Opponents also think that the ordinance is contrary to state law.

In 1985, the Montana legislature passed a law preempting municipalities from regulating firearms at the local level. Missoula county resident Gary Marbut helped pass the law with support from the NRA, which has successfully pushed similar preemption laws in 46 states, including each of Montana’s neighbors, since the mid-1980s.

“That was one of my first forays into politics,” says Marbut, now president of the Montana Shooting Sports Association (MSSA). Since then, MSSA has helped pass nearly 70 gun bills in the state legislature.

Marbut is a strong critic of the new ordinance. “It’s ill-conceived and useless,” he states over the phone. And, thanks to the state law, he believes it won’t survive a legal challenge.

City Attorney Jim Nugent argued in a contrary opinion, released in October 2015, that Montana law, while prohibiting cities and counties from regulating firearms in most cases, explicitly empowers local governments to prevent the possession of firearms by convicted felons, adjudicated mentally incompetent persons, undocumented immigrants and minors—a task that advocates say would be accomplished by expanding background checks.

Von Lossberg is well aware that the answer to this legal question will likely have larger implications for the state of Montana, and perhaps the region. He expects the ordinance to pass this spring and to survive legal challenges. He also hopes other communities will follow Missoula’s example in adopting background checks.

“Plenty of people told me I was crazy to do this,” he says, with a cautious smile. “But I’ve realized most of the community wants to talk about this.

“There’s really no fancy discourse required,” he continues. “The data says they will save lives. So, do we want to save lives?”

Gabriel Furshong lives in Helena, Montana, where he writes for The Nation, The American Prospect, and other publications.