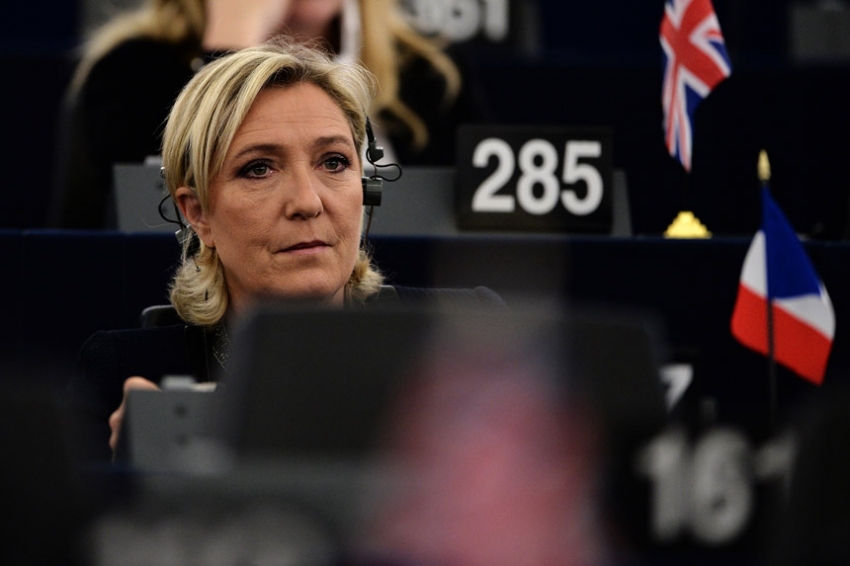 The Left should not take its cue from Marine Le Pen, seen here at a meeting of the EU Parliament. (Frederick Florin/AFP/GETTY IMAGES)

Why We Need a New Left Internationalism

We need to push for a new architecture of international trade, investment and technology transfer that puts worker representatives at the decision-making table.

Right-wing populists from Donald Trump to British Brexiters to French National Front presidential candidate Marine Le Pen are all playing the nationalist card. They are ﬂaying a liberal internationalist world order that has hemorrhaged the jobs of the domestic working class for the proﬁts of a ﬁnancial elite.

In response to the Right’s success, many progressives yearn to advance a full-on populist message of their own. This populist Left (both in the U.S. and in Jeremy Corbyn’s Labour Party) addresses the same domestic anxieties as the Right, holding out hope for a return to a buoyant national economy, diﬀerentiating themselves by promising a fairer distribution of wealth and reduced carbon footprint.

But this nationalist approach to left populism is limited. While both Bernie Sanders and Hillary Clinton opposed the TPP, neither oﬀered an alternative vision of the world economic order. Indeed, by generally identifying the international economic marketplace as the source of job loss and inequality, political populism—of the Right and the Left—severely restricts the range of remedies at our disposal, leading many to propose false solutions or no solutions at all.

For one, if the economic problem is located somewhere “out there” in other countries, then why should voters not want to close borders against people as well as goods? The fears implicit in populist nationalism tend to stoke right-wing solidarity around “God and home and country.”

Second, the diagnosis is wrong. There was no “golden age” in which we prospered by our own bootstraps, without reliance on others’ labor or their products. Populists tend to contrast the depredations of present-day “globalization” with the period of relative economic abundance and opportunity lasting roughly through the postwar years of 1946-1973. But that era, too, contained a complex international economic order—jobs in Iowa and Wisconsin have long been linked to world markets. The U.S.—including the labor movement—pushed for more open trade (and the Bretton Woods institutions that sustained it) in those years precisely because American wealth and jobs depended on markets and natural resources abroad.

To be sure, as new platforms of production, transportation and communication opened up, the global tide of commerce decimated the old industrial working class while driving a stake of insecurity through much of the working population. Yet, as the global economic order has turned harshly against worker interests, why can it not turn again?

Progressives must not cede discussion of the world economy either to the liberal globalizationism promulgated by Thomas Friedman and Mark Zuckerberg or the pseudo-protectionism associated with Trump and Le Pen. While the former accepts the current slide of the Western working class as inevitable, the latter proposes only arbitrary and authoritarian countermeasures.

Instead, we need to push for a new architecture of international trade, investment and technology transfer that puts worker representatives at the decision-making table. Moving forward, international trade deals—in principle a good thing—must bring wages in cheaper-labor countries into closer alignment with those of their developed-world trading partners.

There is a yearning in many of us to explore and interact with the larger world; those who share this yearning are a far larger force than those who would retreat into narrow, parochial spheres of living. Given our instant connections, our tangled supply chains, our interrelated spirals of innovation and debt, the idea of retreat to protected national enclaves—racial, political or economic—is the darkest of illusions.

To be sure, we must now engage locally, coming to the aid of those most in need. Our immediate struggles, how-ever, should not detain us from building a brighter future. Amidst disappointment, even despair, at the revanchist impulses infecting our scared nation, the power of civil society still beckons to make connections between communities and across borders.