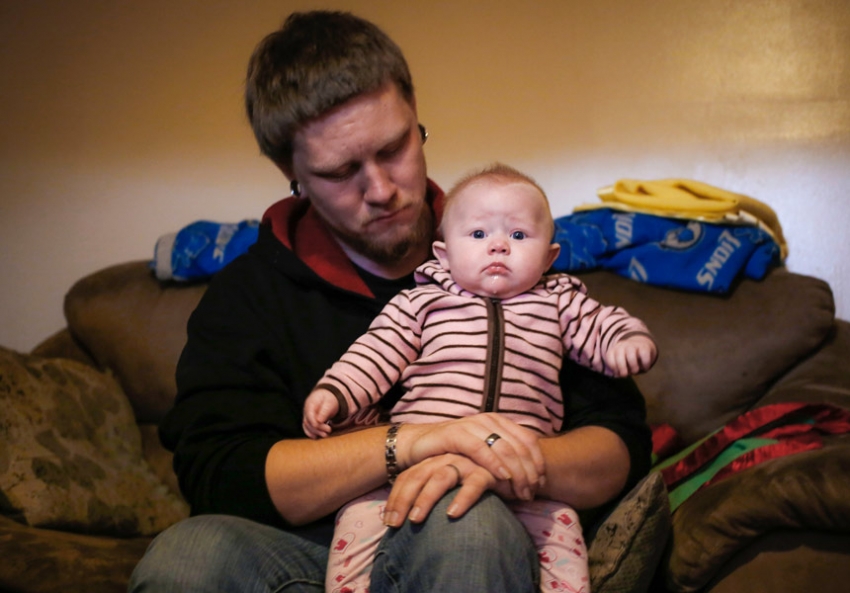 Coal country residents like Jeremy Smith, 24, and his four-month-old daughter, Cynthia, will be hurt by Trump’s budget. (The Washington Post)

How Trump’s Arts and Research Cuts Hurt His Supporters

Trump’s budget poses a particular threat to those who voted for him.

For a macho guy with a hard-on for national security and economic growth, Trump appears clueless about the role that research plays in making and keeping America “first.”

I must have missed something in Trump’s slash and burn “budget proposal.” Remember his repeated campaign promise to rebuild the country’s eroding infrastructure? Not a peep about that.

Instead, and in line with his monomaniacal assault on facts, Trump and his craven “advisers” are determined to dismantle the nation’s research infrastructure, from the National Institutes of Health (NIH) to the research and development branches of the Department of Energy (DOE) and the Environmental Protection Agency (EPA), which provide critical information for mitigating and adapting to climate change and other ecological perils.

For a macho guy with a hard-on for national security and economic growth, Trump appears clueless about the role that research plays in making and keeping America “first,” as well as secure. The United States has been a worldwide leader in research and development, investing the most money in it and producing the most advanced degrees in science and engineering. But guess who’s nipping at our heels, increasing investment, especially in science, while ours stalls? China, Trump’s bête noir.

Decimating our information infrastructure further deprives progressives and independents of the data and knowledge they need to counter rightwing propaganda—in particular, climate denialism. “Trump’s scorched-earth budgets for the EPA, NASA and the National Oceanic and Atmospheric Administration aim to kneecap climate science by defunding Earth-observing satellites, data centers and the scientists who work there,” notes my colleague Paul Edwards, author of A Vast Machine: Computer Models, Climate Data and the Politics of Global Warming. If there’s no research documenting environmental problems, then there’s no data supporting the need for regulating corporate polluters.

But the great irony here is that these cuts will especially hurt those in states that went for Trump. Not that this will bother the president, Bannon and Co. After all, enforced ignorance—coupled with manufactured lies and misinformation—prevents Trumpsters from seeing how they will be utterly screwed.

Some proposed cuts to our information infrastructure aim at long-lusted-after Republican targets: Trump wants to eliminate the Corporation for Public Broadcasting, the National Endowments for the Arts and Humanities, and the Institute of Museum and Library Services. While these cuts may pander to the anti-“liberal elite” sentiments of Trump’s base, these institutions do not only, or even primarily, serve Chardonnay drinkers and arugula eaters. Rural areas, especially, rely on these agencies for public TV and radio, access to theater, music and art, and libraries—often the main source of internet access in remote areas.

Still other proposed cuts could eviscerate scientific research of crucial interest to Trump voters. Many of them are less educated, live in rural areas with poor health outcomes, and live in polluted areas, like coal country. EPA research affects them, as it measures and monitors air quality, examines the links between air pollution and heart disease and stroke, and researches water quality and contaminants in water supplies, including after natural or manmade disasters. The states with the greatest number of severe thunderstorms (Oklahoma, Kansas) and hurricanes (Texas, Florida) all went for Trump.

The Department of Agriculture, meanwhile, conducts studies on poverty, food deserts and childhood obesity, which disproportionately affects kids in rural areas. The NIH develops and collects epidemiological research essential to Trump voters, investigating new ways to screen for lung cancer, how diet affects the risk of heart disease or stroke, and interventions to reduce alcohol use among rural youth.

The Department of Education studies and makes recommendations about safety and bullying in K-12 schools, the use of drugs and alcohol in schools, and early childhood education and school readiness, all of which can especially affect kids in rural and deindustrialized areas.

Trump’s supporters may believe that scientific research is either bogus or unnecessary. But in the case of his proposed budget cuts, ignorance is not bliss. It is dangerous and even lethal to individuals and our national health, safety and security.