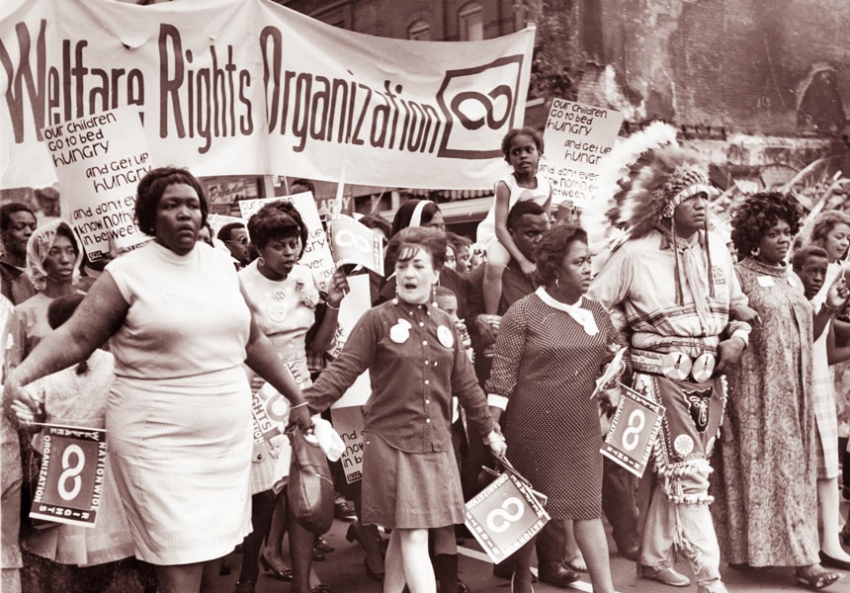 Mothers of the World, Unite!

A politics of motherhood that demands society puts a value on mothers and mothering is a politics that repudiates the patriarchal idea that women fill a “natural” role in society.

Motherhood has been everywhere in the political discourse of the past year, sneaking its way into the mainstream under cover of louder and flashier debates. It was in the paid family leave policies put forward by everyone from Bernie Sanders and Hillary Clinton to (for some reason) Ivanka Trump. It was in the newfound awareness of child care as a national crisis, and Clinton’s own ambitious proposals on that front. Motherhood framed the way we talked about other crucial issues, from Black Lives Matter to the minimum wage. Most recently, Trump’s nomination of Betsy DeVos as Education Secretary received overwhelming blowback from constituents and politicians alike, precisely because her anti-public-school policies financially hurt parents and endanger their children. Again and again, motherhood has been there, bridging the politics of gender and the politics of class, situating abstract economic issues in the specificity of real human lives. We cannot evade motherhood politics. But this time, just maybe, we might get them right.

Strange as it may seem, it’s feminists who are most often adverse to motherhood as an organizing cry. That objection is rooted in a long history: The conservative ideal of the sweet, self-sacrificing, married, stay-at-home mom has been used to beat half to death any woman who fails to resemble her. Women still have to fight for the dignity and value of not mothering—thus our focus on birth control access, or abortion, or choosing to be childfree.

Meanwhile, the same folks telling us to stay at home routinely demonize non-white mothers with invocations of “welfare queens” and “anchor babies.” And let’s not forget the alt-Right’s fixation on “white genocide,” raising the specter of non-white reproduction in the hopes of inciting demographic panic.

Even when motherhood is used for progressive gains, it often smacks of retrograde stereotypes. Take the famous Mother’s Day proclamation: the 1870 anti-war manifesto that spawned a Hallmark holiday and even now informs the idea of mothers as a political class. “Our sons shall not be taken from us,” Julia Ward Howe wrote. “We, the women of one country, will be too tender of those of another country to allow our sons to be trained to injure theirs.” Howe used mothers’ superior “tenderness” to argue for giving them real power, calling for “a general congress of women” to achieve “the amicable settlement of international questions.”

To be sure, going from “mothers are inherently nice” to “the U.N., but with chicks” within four paragraphs is a spectacularly ballsy move. But Howe’s portrait of pacifist motherhood was not much different from the “Angel in the House” ideal of her age: Mothers were a civilizing force, inherently kinder and more pious than men, and their primary purpose in life was to bear children and instill Christian morals in them. This vision of motherhood, of course, applied exclusively to white women. Howe was writing five years after the Civil War; black women’s motherhood, under slavery and after it, was treated with contempt.

Fast forward to today: Consider how left-wing populists (even the otherwise great Elizabeth Warren, in her book The Two-Income Trap) can slip into fetishizing the single-income, Father Knows Best family—which feminists fought tooth and nail to dismantle. Consider how even “progressive” women-led groups, like Code Pink, can slip into Howe’s trap of fetishizing mothers’ selfless devotion to their children, rather than advocating for the mothers themselves. Consider—if you can stand it—the poreless, femvertised motherhood politics of Ivanka Trump and/or her Instagram.

But motherhood need not be the province of conservatives, nor sentimentalized by well-meaning sexism on the Left. Though motherhood as a symbol is often anti-feminist, motherhood as a reality can be exceptionally fruitful feminist ground.

One might think that there’s not much about mothers that isn’t ably covered by a more general politics of feminism or parenthood. But much of the discrimination we associate with being a woman in the workforce is, in fact, specific to being a mother. According to Kristin Rowe-Finkbeiner of MomsRising, an economic-justice coalition for mothers and children, “being a mom is now a higher predictor of wage discrimination than being a woman.” It’s well known that women make approximately 78 cents to a man’s dollar; what’s less well covered is that this is an average. In reality, women who aren’t parents make 96 cents to a man’s dollar. Mothers make 76.

Mothers are also less likely to be hired or promoted than women without children, and they’re uniquely vulnerable to pregnancy discrimination. Most importantly, none of this happens to fathers, except those men who take the “motherly” step of requesting part-time work in order to care for children. In fact, the motherhood penalty opens up some of the most important truths about womanhood and work. Women are the only people whose work is framed as instinctive— something they can’t help doing, and therefore, something they don’t need to be compensated for. The emotional labor of keeping relationships or communities together, the domestic and care work of parenting—all of this is supposedly what a woman needs to be “happy,” not a learned skill. Yet this free work is necessary to keep society functional, and rather than taking to it instinctively, women have to be shamed and strong-armed into doing it. We wouldn’t be reading 75,000 opeds about how selfish working mothers are if women’s “natural” inclination was to abandon all hope of public life the moment sperm hit egg.

A politics of motherhood that demands society puts a value on mothers and mothering is a politics that repudiates the patriarchal idea that women fill a “natural” role in society. Such a movement, then, treats mothering as work—domestic and emotional labor that comes with a set of objective, pragmatic needs that can be addressed with practical solutions. It insists on the value of the workers themselves, and frames its demands around their needs. It is not easy to keep a being alive when it has no language, no means of selfdefense and a tendency to put everything it can see directly into its mouth. The organizational and interpersonal skill necessary to manage another person’s schedule, emotional life and survival needs, often with little to no sleep or self-care time of your own, is not a valueless resource. Motherhood may be pleasurable—many kinds of work can be—but it cannot be done well at all unless mothers themselves have social and practical support.

The history of feminism practically overflows with this sort of thinking: Dorothy Dinnerstein, Audre Lorde, Adrienne Rich, Silvia Federici, Barbara Ehrenreich, even Betty Friedan all poured ink and sweat into the topic. We’re not bringing motherhood into the political discourse—we’re bringing it back.

Take Federici’s fight for wages for housework (“every miscarriage is a work accident”), or the second-wave feminist campaign for state-sponsored child care exemplified by 1971’s failed Child Development Act. NOW, considered hopelessly mainstream today, made the now-unthinkable argument that child care should not only be free, but available 24 hours a day.

The approach has also been led by the women of color who guide the movement for reproductive justice, which posits abortion as only one of many necessities in reproductive and sexual autonomy; women must not only be able to choose when they get pregnant, but every mother must be empowered to, as per the SisterSong Women of Color Reproductive Justice Collective, “parent the children she already has with the necessary social supports in safe environments and healthy communities, and without fear of violence from individuals or the government.” Like all good intersectional politics, this draws issues together into new and relevant constellations: Domestic violence and state violence are both reproductive-justice issues, as are abortion and child care, gun control and criminal justice reform, education and environmental pollution. It places the responsibility for child safety firmly in the public sphere. Rather than endlessly blaming and shaming mothers for “failing” their children every time something goes wrong, it asks how the system has been built to fail children and mothers alike, and how it might be rebuilt to help them better succeed.

Forging any kind of utopian, or even optimistic, vision in the Trump era is hard. It’s harder when dealing with a split and wounded Left, where the false dichotomy between “identity politics” and class politics is frequently used to kick anyone one doesn’t like off of Progressive Island. Yet if there is a way forward, motherhood politics is key: a substantive economic theory of labor, deeply rooted in a specific identity and the lived experience of oppression.

Motherhood politics is not only essential to a full understanding of labor—its position at the intersection of identity and work makes it a place where important questions can be asked and answered. It transforms the domestic, traditionally trivialized and pushed aside as mere “women’s stuff,” into the central ground where policy is felt and forged. We can address more than we think possible, simply by addressing the sharp and specific facts of mothers’ lives.