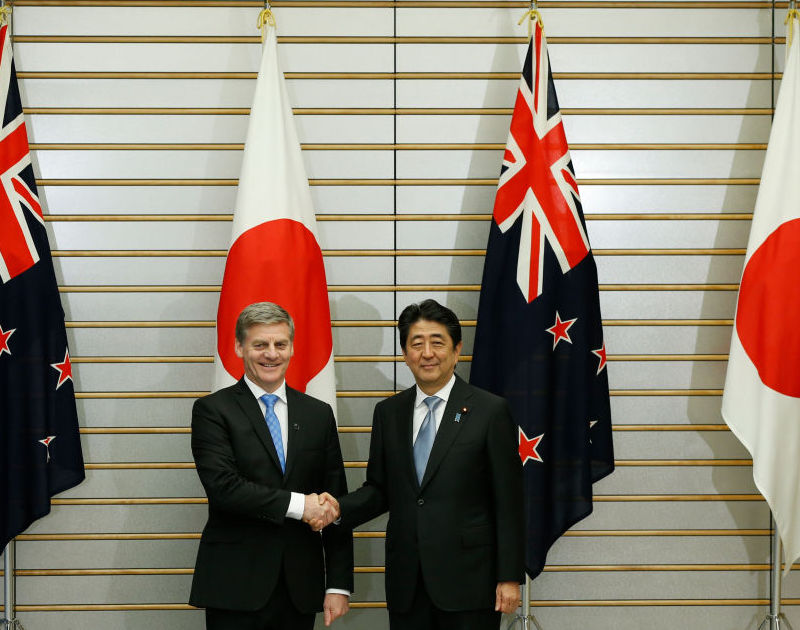 New Zealand and other signatories are quietly reviving the neoliberal trade deal, confident the political winds in the U.S. will shift.

How did the deal go from dead in the water to viable in just four short months?

Months ago, the just-inaugurated President Trump signed a memorandum pulling the United States out of the agreement, following an election season in which the TPP had served as a bipartisan whipping boy. News outlets the world over proclaimed the deal dead. The leader of the largest remaining signatory, Japanese Prime Minister Shinzō Abe, appeared to sum up the prevailing sentiment when he told reporters after Trump’s win that “the TPP would be meaningless” without the world’s largest economy.

Never count a good neoliberal trade deal out. The agreement’s architects have been determined to electrify the TPP’s moribund body back to life, and appear to have succeeded—complete with a plan to get the United States’ elusive signature.

At a trade forum hosted by Asia Pacific Economic Cooperation (APEC) in Vietnam in late May, the 11 signatories—Australia, Brunei, Canada, Chile, Japan, Malaysia, Mexico, New Zealand, Peru, Singapore and Vietnam—got together to discuss the future of the TPP. They came away from the two-day summit with an agreement to keep the deal alive.

U.S. Trade Representative Robert Lighthzier was none too happy, and maintained that the U.S. was out of the agreement for good. “The United States pulled out of the TPP and it’s not going to change that decision,” he said at a news conference.

The rest of the TPP signatories don’t seem to be buying that, however. Various stakeholders have made clear they’re negotiating the deal under the assumption that the political winds in the United States will shift.

“There’s a collective interest in maintaining the agreement in a way that the U.S. could sign up to in the future,” New Zealand Prime Minister Bill English told Radio New Zealand on May 17. He also told current affairs program Q+A that it was important to keep those features negotiated by the United States in the deal, as “it increases the likelihood that the U.S. would be incentivized to join it later.”

Following the talks in Vietnam, Australian trade minister Steven Ciobo told reporters “It may not suit U.S. interests at this point in time to be part of the TPP, but circumstances might change in the future.”

The strategy seems clear: With a President Trump and a U.S. voting public that dislikes the TPP, trying to involve the United States in the negotiations now isn’t politically viable. Instead, the remaining 11 countries will keep the deal alive and wage a war of attrition, waiting for Trump to leave and be replaced by another Republican or centrist Democrat, who will promptly attempt to ratify it.

How did the deal go from dead in the water to viable in just four short months? Much of the push has come from New Zealand, whose center-right National government played a leading role in forging the deal. After Trump’s January 23 presidential memorandum the agreement’s signatories scrambled to find some way to ensure the seven years they had spent negotiating the deal wasn’t for nought. Australia and New Zealand floated the idea of urging China and other Asian countries to join.

On February 7, Stephen Jacobi, executive director of the New Zealand International Business Forum and former head of the USNZ Council—an organization that worked with the New Zealand government to promote the TPP—gave a speech to the Asia Forum in which he suggested “some quiet diplomacy … to see if the remaining 11 parties, or a subset of them, see merit in amending TPP to take account of U.S. withdrawal.” Over the past few months, New Zealand trade minister Todd McClay embarked on a whirlwind tour of TPP signatories in order to convince them to stay the course. One stop was the May 17 trip to Japan with Prime Minister English, which earned them a commitment from Abe to an “early realization of TPP.”

All of this culminated in the signatories’ decision in Vietnam to keep the TPP going—complete with the not-so-hidden strategy of leaving the door open for a future U.S. president to come on board.

The success of that strategy isn’t a foregone conclusion. While those in favor of luring back the United States want the text to remain essentially identical, both for the sake of avoiding another round of protracted negotiations and as a way to entice the United States to rejoin, there isn’t a consensus. Canadian officials said following the Vietnam meeting that the deal would have to change significantly without the United States, as did Malaysia’s trade minister.

Various experts have expressed skepticism that under international law, the text can simply remain the same. “At the end of the day you have to create a whole new legal text,” Lauren Bosma, a trade expert at lobbying firm Albright Stonebridge, told Foreign Policy. “You can’t just strike the United States out of it.”

The problem there is that renegotiation of the treaty is fraught with uncertainty. The agreement required a careful balancing of the 12 original signatories' original demands, taking years to negotiate before the United States pulled out. Reopening the negotiations could result in another tortuous process that ultimately dooms the agreement.

The New Zealand election in September 2017 could also throw a wrench in the works of the TPP revival. The agreement faces opposition from the country’s Labour Party, its Green Party and New Zealand First, a quasi-nationalist, often anti-immigrant party. While the most recent polling shows the National Party being able to form a government with the support of its usual coalition partners, a lot can change between now and September. It was only a little more than a month ago that National was neck and neck with a Labour-Greens coalition, with New Zealand First the potential decider of which party will form the next government. If National finds it needs New Zealand First’s support again to form a government by September, it may have to end up giving up on the TPP.

Nonetheless, the TPP has been counted out before, and it’s proved surprisingly resilient, as this latest episode proves. One factor that will be key is continued widespread public resistance to the TPP, particularly as the agreement still hasn't been ratified by nine of the signatories. The agreement triggered multiple protests worldwide. In the United States, groups like Public Citizen, Sierra Club and Our Revolution used an inside-outside approach to fight the agreement, pairing high-profile protests (like the disruptions of the 2016 Democratic National Convention) with internal pressure from progressive Democrats.

It was such pressure that forced Hillary Clinton to change her stance on the agreement (however disingenuously), while GOP voters’ hostility to the agreement continues to make supporting it unpalatable to Republican lawmakers. This public opposition will need to continue if Americans, and the rest of the world, want to see the TPP shuffle off this mortal coil—for good, this time.