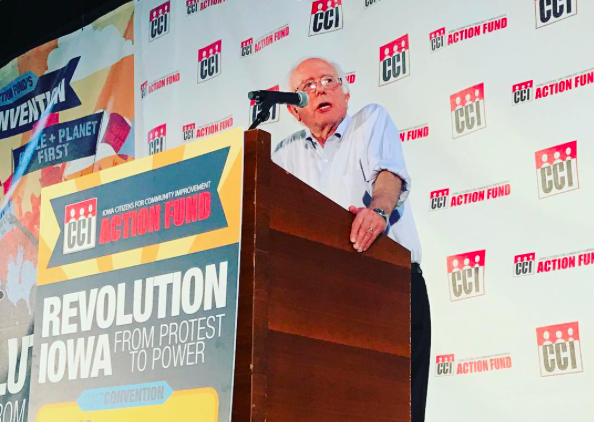 Sanders hasn’t stopped railing against billionaires and the ruling class—and he’s not denying the possibility of another presidential run.

Sanders’ speech had all the hallmarks of a campaign rally.

Senator Bernie Sanders (I-Vt.) returned to Iowa on Saturday for the first time since 2016 and brought the house down during a keynote speech in front of more than 1,000 community activists.

His visit to the early voting swing state fueled nationwide speculation that Sanders may run for president again in 2020, a possibility he has not denied.

Sanders’ appearance in the corn state on Saturday was organized by Iowa Citizens for Community Improvement (CCI) Action Fund as part of their annual convention, “Revolution Iowa: From Protest to Power.” Iowa CCI is a populist community organization with more than 4,000 members. The group has had a relationship with Sanders since 2014.

Longtime CCI leaders opened their convention Saturday morning with call-and-response chants. By the time Sanders appeared Saturday afternoon, the crowd had swelled from 800 people to more than 1,000. Late in the day, CCI staff announced they had raised more than $30,000 from convention goers during a fundraising pitch moments before Sanders walked on stage.

Sanders’ speech had all the hallmarks of a campaign rally. He thanked his local supporters and called for a political revolution against the oligarchy, billionaire class and one percent. He railed against Citizens United, strict voter identification laws and catastrophic climate change. And he spoke at length about the historic fight of African-Americans, women, immigrants, and LGBTQ communities for equal rights.

Sanders also hammered President Donald Trump and the GOP on their bill to repeal the Affordable Care Act, as he did recently in similar trips to Kentucky and West Virginia. If passed, the “Obamacare” repeal would throw millions of people off health insurance, cut Medicaid and turn over millions of dollars in tax cuts to the wealthy and big corporations.

Sanders told the crowd that a 60-year-old worker in Des Moines making $40,000 a year could see their annual health insurance costs increase from $400 to $8,000.

“Medicaid pays about two thirds of the funding for those people who are in nursing homes,” he emphasized.

“So, I say to the people of Iowa, if you have a mom or dad who is in a nursing home, what happens when Medicaid is severely cut and those people are forced out of their nursing homes?” Sanders continued. “Who will take care of them? What happens to their lives?”

“Our immediate test, as we go on to health care, is to defeat this horrific legislation,” Sanders said. “But as soon as we accomplish that, I will be introducing legislation which has gained more and more support all across this country, legislation for a Medicare for All, single-payer system.”

Sanders is increasingly seen as the Democratic Party frontrunner in 2020, but his relationship with the party is complicated and full of conflict. Many of his supporters believe the Democratic National Committee stacked the deck against him during his primary battle with Hillary Clinton last year. A Clinton supporter is now challenging Sanders for his Vermont Senate seat.

“The current strategy of the Democratic Party is an absolute failure,” Sanders said at the People’s Summit in Chicago in June, where he called for a progressive takeover of the party.

But Sanders also gave the Democratic National Committee (DNC) $100,000 in May to reimburse the party for expenses on a post-election Unity Tour. And he endorsed and campaigned for Clinton last summer. Critics from the left have accused Sanders of being a “sheepdog” for the Democratic Party, herding people disaffected with corporate capitalism and the two-party system back into the “graveyard of social movements.”

The tension between Sanders, his allies and the Democratic Party was on full display in Iowa on Saturday.

“The Democratic Party won’t even implement its own agenda,” said Michael Lighty, a National Nurses United organizer, during a convention workshop on the movement for single-payer health care.

“Every Democrat was ‘pro-immigrant’ but wouldn’t put a bill on the floor for us,” said Erika Andiola, an undocumented DREAMer and political director of Our Revolution, during another workshop story on the power of community organizing. “We said you put it on the floor or deport us.”

Sanders is set to return to the first-in-the-nation caucus state on August 31, where he will promote his new book, Bernie Sanders’ Guide to Political Revolution, at Hancher Auditorium in Iowa City.