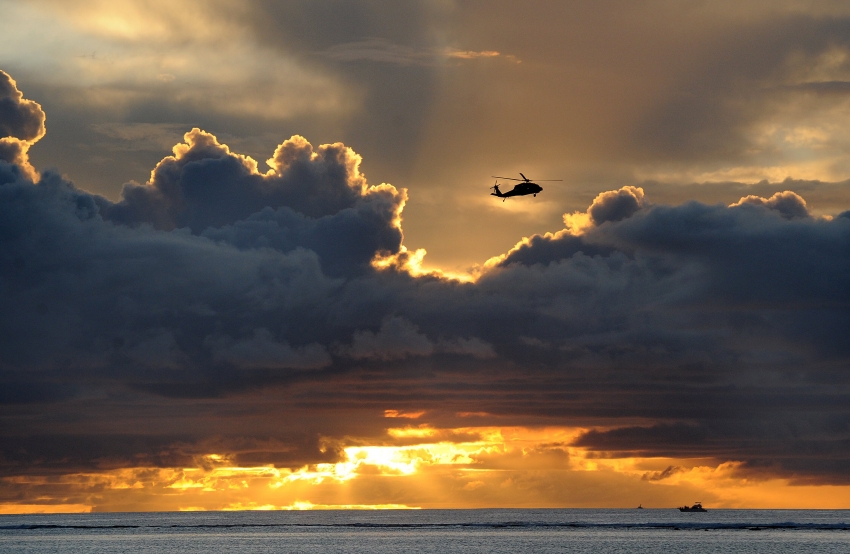 A military helicopter flies over the waters of Agana Bay in Hagatna, Guam, on Aug. 10, 2015. (Tiffany Tompkins-Condie/McClatchy DC/TNS via Getty Images)

The U.S.-Occupied Colony In the Crosshairs of Trump’s Reckless Brinkmanship with North Korea

Guam’s residents do not get to vote for U.S. president, but they are directly impacted by Trump’s dangerous threats.

The prospect of war between the United States and North Korea has increased dramatically over the last week.

On Thursday, North Korean state media announced that Kim Jong-Un’s military personnel are preparing a plan to fire four ballistic missiles into waters off the coast of Guam, a U.S. territory in the Pacific Ocean that is home to roughly 163,000 civilians, two military bases, around 7,000 troops and many more personnel military personal and their dependents. This is only the latest development in what CNN is calling “an unprecedented exchange of military threats between Washington and Pyongyang.”

Despite calls for calm and restraint from Gov. Eddie Calvo, many of the island’s residents are unsurprisingly worried about a potential nuclear shootout between the two countries. As one local stand-up comedian told the BBC, “There have been threats before but this time feels different. We’re really caught in the cross fire. President Trump seems as much of a saber-rattler as Kim Jong-Un in Pyongyang. And a lot of people here feel like Trump is the guy who might actually press the button.”

But while media pundits endlessly debate whether or not Trump will enforce his ‘red line,’ the decimation of Guam’s ecosystem and the displacement of its indigenous population at the hands of the U.S. military goes largely unmentioned.

Guam’s strategic importance to the United States is well documented. Located roughly 1,500 miles east of the Philippines and roughly equidistant to the Korean Peninsula and the South China Sea, the island is, as described by former Secretary of Defense Ashton Carter, “an important strategic hub for U.S. military in the Western Pacific.” Historically, the island has played an outsized role in U.S. military ventures in the Pacific, particularly during the Korean War in the 1950s and the Vietnam War a decade later.

But Guam’s ecosystem and its indigenous people, the Chamorros, have paid a high price for the island’s strategic importance to the United States.

Guam was attacked and invaded by Japan in 1941, shortly after the bombing of Pearl Harbor. It took the United States nearly three years to recapture the island. During that time, the Japanese military subjected the indigenous people of Guam, the Chamorros, to torturous conditions. In all, historians estimate that violence resulting from World War II killed 10 percent of the island’s total population.

After the war, the United States sought to militarily fortify Guam and its other Pacific territories. This led to the displacement of thousands of Chamorro families as the military seized thousands of acres of land for its own use. Soon after, the military bases became a major source of employment on the island, making it harder for traditional modes of subsistence living to continue. As a marker of the intense Americanization that took place in Guam after World War II, only 20 percent of Chamorros in Guam spoke the Chamorro language in 2010: In 1950, that figure was 100 percent.

U.S. nuclear testing in the nearby Marshall Islands during the 1950s also bore devastating consequences for the Chamorros. According to a 2010 article in The Asia-Pacific Journal,

The incidence of cancer in Guam is high and Chamorros have significantly higher rates than other ethnic groups. Cancer mortality rates for 2003-2007 showed that Chamorro incidence rates from cancer of the mouth and pharynx, nasopharynx, lung and bronchus, cervix, uterus, and liver were all higher than U.S. rates. Chamorros living on Guam also have the highest incidence of diabetes compared to other ethnic groups, and this is about five times the overall U.S. rate. The entire island was affected by toxic contamination following the “Bravo” hydrogen bomb test in the Marshall Islands in 1954. Up to twenty years later, from 1968 to 1974, Guam had higher yearly rainfall measures of strontium 90 compared to Majuro (Marshall Islands). In the 1970s, Guam’s Cocos Island lagoon was used to wash down ships contaminated with radiation that had been in the Marshall Islands as part of an attempt to clean up the islands.

In 2009, Madeleine Bordallo, Guam’s elected representative to Congress—who, in accordance with the Guam Organic Act of 1950, has no voting power—introduced an amendment the Radiation Exposure Compensation Act (RECA) so that it includes Guam in its list of “downwinder” areas affected by atmospheric nuclear testing conducted in Micronesia. The act got stuck in committee.

A year later, Senator Tom Udall of New Mexico introduced an amendment to RECA that would give Chamorros in Guam compensation for the hazardous effects of nuclear fallout. It, too, didn’t make it out of committee. Udall re-introduced the bill in 2011 and again in 2013 to no avail. As of today, Chamorros in Guam only qualify for compensation under the “onsite participants” category, which only covers victims who were present at “any designated location within a naval shipyard, air force base, or other official government installation where ships, aircraft or other equipment used in an atmospheric nuclear detonation were decontaminated,” leaving out many affected by nuclear fallout on the island.

Today, the Department of Defense owns nearly a third of Guam’s total landmass. But as the Pentagon seeks to relocate Marines from its base in Okinawa—primarily due to continuous protests against the military base by Japanese citizens—that figure is only going to increase. In 2006, the Navy proposed moving 8,600 Marines from Okinawa to Guam, as well as expanding its operations in Apra Harbor, which would have destroyed 70 acres of coral reefs in the process. Outcry against the destruction of the reefs eventually forced the Navy to cancel its plans in Apra Harbor. While the Apra Harbor was stopped (for now), the Navy still plans to relocate 5,000 Marines and 1,300 dependents beginning in 2022. In conjunction with the tens of thousands of construction workers who will be sent to work on military buildup projects on the island over the next decade, Guam’s water supply will come under great duress, as will it its transportation infrastructure, while also creating thousands of pounds of hazardous waste.

Of course, the Pentagon argues that these projects boost Guam’s economy. But for many on the island, the benefits are outweighed by the costs—environmental, social, and political. The issue for many on the island is that there is no democratic process in place to settle these differences. As a non-self-governing territory—a.k.a. a colony—the people of Guam have no say in whether or not they want to live in proximity of four fast-attack nuclear submarines and an expeditionary helicopter squadron.

Thankfully, the United Nations has advocated for Guam’s right of self-determination, and there’s a big chance high schoolers on the island will be introduced to decolonization classes and instructional material as early as next year. But until the people of Guam are allowed to decide their own destiny, they will remain in the crosshairs of millitary escalation fueled by the United States.