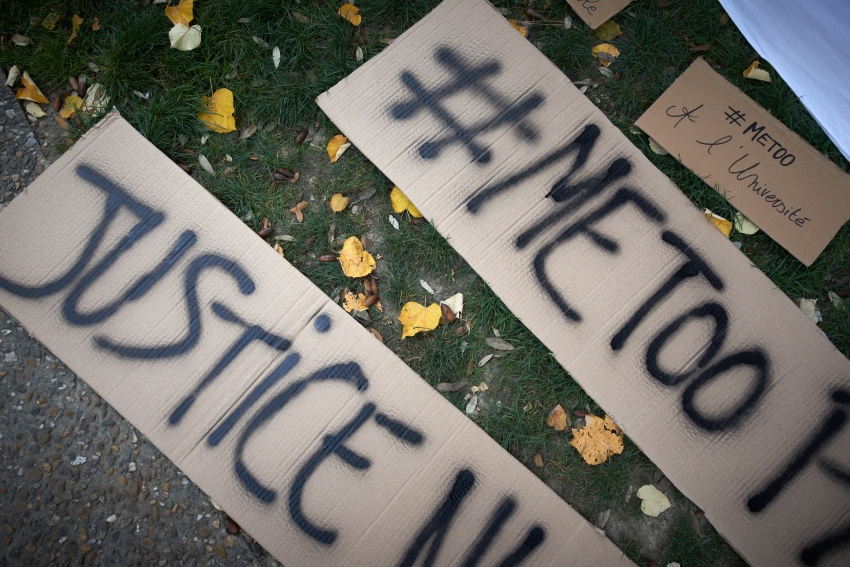 Why the Weinstein Story Has Been So Huge

Until we confront rape culture as a whole, the #MeToo testimonies will continue.

Arrogant, bullying, entitled and totally abusing his power, Weinstein is a perfect piñata to bash with our 'impeachment now'-embossed shillelaghs.

The Harvey Weinstein scandal hurtled like an asteroid into Planet Media, with debris still flying. Fired from the company he founded, stripped of his membership in the Academy of Motion Picture Arts and Sciences, vehemently castigated by various A-listers as well as acting aspirants, and prompting a massive, extraordinary social media campaign, #MeToo, Weinstein has become a dark hole into which so many are pouring so much outrage. Why has this story been so huge? It goes without saying that his decades-long behavior has been despicable, but then we had a presidential candidate’s boast about groping women at will dismissed as “locker-room talk,” and he’s now president. And while the Roger Ailes and Bill O’Reilly harassment scandals were major stories, they were nothing like this. What has made this scandal blow up? And when the dust settles, will anything have changed?

First, it wasn’t just women; reports suggest that many men suffered verbal abuse from Weinstein and are luxuriating in schadenfreude. On a plane about 10 years ago, I met a man who had worked with Weinstein and described him as a “total prick.” Accounts have emerged of his publicly humiliating men, which bred keen, festering resentment. If it had just been women who had been harassed, assaulted and humiliated—while men had been treated with respect, even deference—would the story have had the legs it did?

Then, of course, there is one-upmanship in the media (print winning the day over a timid NBC), as well as overcompensation for years of ignoring or allegedly spiking stories about this “open secret.” Remember that, despite the increased numbers of attractive young women in sleeveless dresses on the cable news channels, the news media remains dominated by rich and powerful white men. Maybe, too, there was shame in having picked up planted smear stories about those who threatened to expose Weinstein. Ronan Farrow, author of the bombshell New Yorker story, which included far more detail than the initial New York Times exposé, says that he first pitched the piece to NBC, which declined to pursue it. Farrow noted the serial manner in which Weinstein used legal threats to suppress negative stories. Now, with the courage of so many women as a shield, those outlets that were cowards, or complicit, can trumpet their outrage and act like they’ve been championing women all along.

But perhaps the biggest reason for the public flogging of Weinstein is that he is a surrogate for Trump, the self-admitted predator we couldn’t keep out of the presidency. Yes, Weinstein is reprehensible, but Trump-the-predator is using his ill-begotten office to systematically attack immigrants, the LGBTQ community, people of color, women and people who need healthcare, while ignoring disaster victims in Puerto Rico, pillaging the environment, and taking us to the brink of war. And for the moment, we can do little to nothing about it. Weinstein is the disgusting dirt bag onto which we can project our fury and frustration. Arrogant, bullying, entitled and totally abusing his power, Weinstein is a perfect piñata to bash with our “impeachment now”-embossed shillelaghs.

While the mainstream media, with their focus on individuals and celebrity, is waiting to see which woman will come forward next and which man can be the next punching bag, more than 4 million people on Facebook, as of this writing, have posted #MeToo. These people, most of them women, don’t necessarily care which famous guy is next. They are testifying to what’s been left out of the coverage: the utter normalization of sexual harassment and assault in our society, and the rape culture that permitted Trump to get elected. So yes, it’s satisfying to excoriate Weinstein and use him to symbolically exorcise Trump, but until rape culture ceases to be a governing element of our society, all too many women will still be saying, “Me, too,” “Me, too,” “Me, too.”

#MeToo seeks to transform such behavior from “normal,” to being seen as weird, perverse, pathetic—and actionable.  And to tar everyone who does it with our new term of opprobrium: “a Weinstein.”