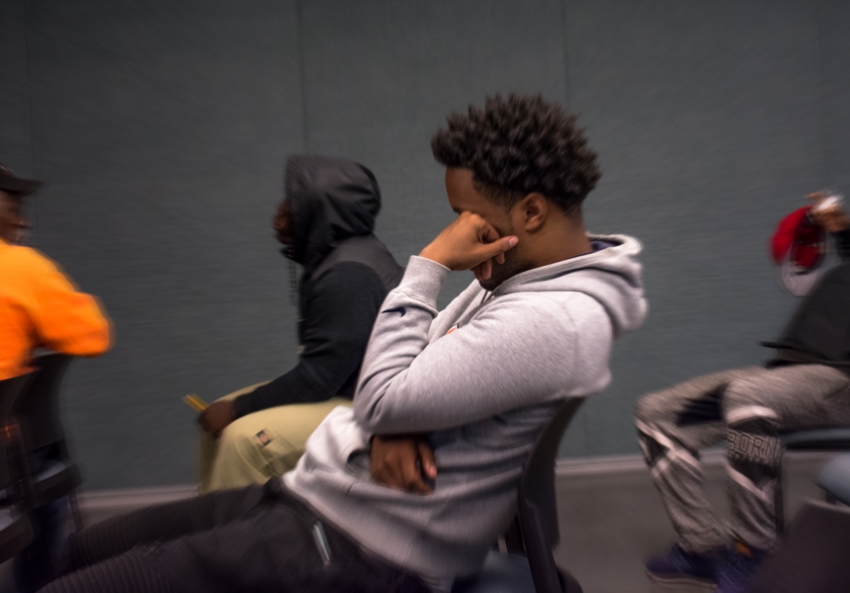 Trial by Peace Circle: How a Chicago Community Is Pursuing Jail-Free Justice

West Side residents are creating alternatives to traditional, punitive courts.

There was no job waiting for me ’cause I had been in jail for the past two years. Y’all had wasted two years of my time.

CHICAGO—It’s 9:30 a.m. on a Thursday in late September and four young men in their early 20s sit bundled in gray and black hoodies in the gallery waiting room of a makeshift courthouse in North Lawndale, killing time on their phones. All are charged with nonviolent drug possession, and all are taking a chance on a new restorative justice court that promises a chance to wipe their records clean if they can make amends to their communities. The court opened August 31 and these four are among the first group of 12 defendants, all West Side men ages 18 to 26 charged with low-level nonviolent misdemeanors and felonies.

At least we’re not at “26th and California,” says 22-year-old Tobias Pierce (all defendant names in this story are pseudonymous, at their request), referring to Chicago’s notorious Cook County Jail, where he was held for two years while on trial for armed robbery. “If [the guards] feel like you disrespecting them, they feel like they can harm you,” he says. “You down in the basement and ain’t no cameras down there.” Although Pierce was found not guilty, he says those two years set him back. “There was no job waiting for me ’cause I had been in jail for the past two years. Y’all had wasted two years of my time.”

The restorative justice court does not hold defendants in jail and may remove their electronic monitoring. If Pierce repairs the harm he did to his neighborhood, he can have his case closed and a clean record in six months to a year.

Despite the small talk, Jefferson Holt, 25, is still feeling nervous. Tall and thin, he rocks back and forth. He came to the court because he is “tired of running from the police” and hopes to get his record expunged. With a record, finding a job hasn’t been easy. He estimates he has applied to around 70 in five months and just landed one.

“[This court] is basically giving you a get out of jail free card, so I’m going to take this and use it,” he says, adding that his little cousins deserve someone better to look up to. He just isn’t so sure yet that the court offers a way out.

Holt speculates with the others about what, exactly, “restorative justice” is. “There must be a lot of stuff you have to do before they even start to expunge your record,” he says, shaking his head.

The court is one of the only alternative courts nationwide to depend entirely on restorative justice. The defendants will meet in confidential “peace circles” with their victims (or, in the case of a nonviolent drug offense, a surrogate victim such as a neighbor), a facilitator and neighborhood residents, and map out a “community agreement” to repair the harm done. If they complete the agreement, they are eligible to have their records wiped clean.

The court also connects defendants with social services, which may help with access to rehab, GED classes or job placement as part of the agreement. If defendants fail to abide by the new court’s rules, they risk being sent back to the courthouse at 26th Street and California.

“You may have noticed this court seems different than other courts,” says Judge Daryl Jones with a smile. He’s sitting at a group of conference tables wedged together into a makeshift square.

Jones lays out some opening points: The restorative justice court is voluntary and requires a serious commitment. “People think with drug cases that it isn’t a violent crime and that it doesn’t hurt the community, but it does,” Jones says. “One bad apple spoils everything. What’s the impact on the family of the person you are selling to? The person you sold to and got them addicted? Do you take responsibility for that? This is what you are going to talk about in circle.”

One by one, the County Clerk calls defendants to the table to sign a waiver committing to the process and giving up the right to a preliminary hearing and speedy trial. The defendants have the right to consult with their public defender or attorney before making the decision. Everyone opts to sign.

“I’m congratulating you on participating and I’m hoping that this gives you an opportunity to reflect,” says Jones to each defendant with a genuine smile.

Each then schedules an appointment with a restorative justice practitioner and social services agent, and a follow-up court date. Court is dismissed just before noon.

Pierce pulls his hoodie over his shoulder-length dreadlocks and starts walking to his home on Chicago’s West Side. “It’s better than the regular court—it’s way better,” he tells me. Organizers have promised him a job. “But it’s just about, what they are saying in here—is it true?

“You don’t want to keep going through the same thing, so you have to try something new,” he says as he makes his way through the gate, clutching a paper with his next court date.

Sarah Conway is a multimedia journalist whose work has appeared in Chicago magazine, Chicago Reader, South Side Weekly, Newcity and other publications. She’s also a reporting fellow at City Bureau, a civic journalism lab based on Chicago’s South Side.