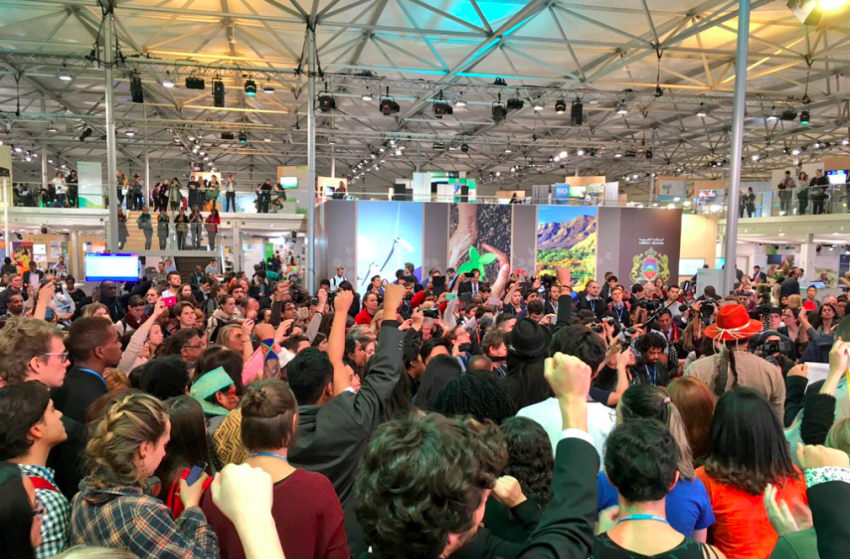 As the Trump Admin. Gives Fossil Fuels Industry the Floor at COP23, Hundreds of Protesters Shut Out

Representatives from fossil fuels companies were invited to speak on a panel alongside White House officials.

The U.S. government’s presence at this year’s U.N. climate negotiations—COP23—has been relatively small. For the most part, career U.S. diplomats have been cooped up in a tiny office away from public view. There was a notable exception, however. The Trump administration invited representatives from fossil fuel companies to speak on a panel with White House officials promoting access to fossil fuels.

The panel prompted what might have been the loudest demonstration yet within the halls of the convention center.

Well in advance of the event—as hundreds lined up outside—delegates with the Indigenous Environmental Network (IEN) and other representatives from the U.S. People’s Delegation led a prayer procession toward the event space with signs outside reading, “We Are Still Here” and “Keep It In the Ground.” This was an effort to counter the panel’s pitch for increased reliance on natural gas, nuclear power and so-called clean coal technologies.

“Nuclear power is not clean and it is not a solution to climate change,” said Leona Morgan, an anti-nuclear organizer who is Diné (Navajo), according to a live stream from IEN. “If Trump and the United States want to push a nuclear agenda, we are here and we will fight back and resist this nuclear imperialism.”

“As Indigenous Peoples with a close relationship to nature, the expansion of fossil fuels extraction and combustion will cause further disruption to the harmony of life as we know it,” Tom Goldtooth, executive director of IEN, said in a statement. “The dangers and risks of creating a nuclear chain reaction, splitting of atoms and from this so-called nuclear energy, is the creation of nuclear waste that could end up being dumped in sacred Indigenous Peoples treaty lands.”

Entry into the panel was selective, and hundreds of people who were shut out joined a sit-in and several rounds of anti-fossil fuel chants.

About 20 minutes into Monday night’s panel, the middle section of the room—roughly 100 people corralled largely by members of SustainUS, a U.S. youth delegation—stood up and started singing to the tune of Lee Greenwood’s “God Bless the USA,” rewritten into a message against the prominent role of the coal industry in American politics (“So you claim to be an American / But we see right through your greed”). Several people held up a sign reading, “We the People” before being escorted out by security, and joining hundreds outside for a “People’s Panel” on the impact of fossil fuels on native communities and young people.

“When we heard this was happening, we knew we had to do something about it,” Karina Gonzales, who is co-leading the SustainUS delegation, told In These times. “Our intention was to silence their lies with the truth, and to silence their greed with beauty and with love…We know we can’t have fossil fuels because we’ve personally experienced their effects.” Gonzales’ family is Purepecha, indigenous to Latin America. She says, before she was born, her family was displaced by fossil fuel development there.

SustainUS sends a yearly delegation to the COP, with this being the first since the Trump administration announced its intention to get the United States out of the Paris Agreement. Since Syria decided to join last week, the United States is now the only outlier. “By the time it’s implemented,” she said of the negotiations, “we’ll ideally have a new president. In the meantime, it is more ideal for the U.S. not to be involved, because they’ll probably obstruct a lot of the progress that will be made here.”

Following the interruption, the room was largely filled with press and Trump administration insiders. Voices from the back sporadically heckled the speakers, a line-up that included an aide to Vice President Mike Pence, an engineer with Peabody Energy and Trump climate and energy advisor George David Banks. Panelists who spoke after the direct action started their remarks with a pitch for hearing both sides of the debate. Chants from outside could be heard through the length of the event, and several of the press and attendees who remained inside asked confrontational question.

In the last question, Amy Goodman of Democracy Now! asked each of the panelists to state whether they supported the Trump administration’s decision to pull out of the Paris Agreement, which was announced in June. None of the panelists offered an immediate “yes,” and two—including a former Obama staffer now working for a natural gas company—said they didn’t support the president’s decision to withdraw from the landmark climate deal.

Organizers with SustainUS reported that the Secretariat’s office, which oversees COP events, agreed in advance of the action not to de-badge protesters who participated in Monday night’s protest, as would normally be expected after large-scale disruptions.