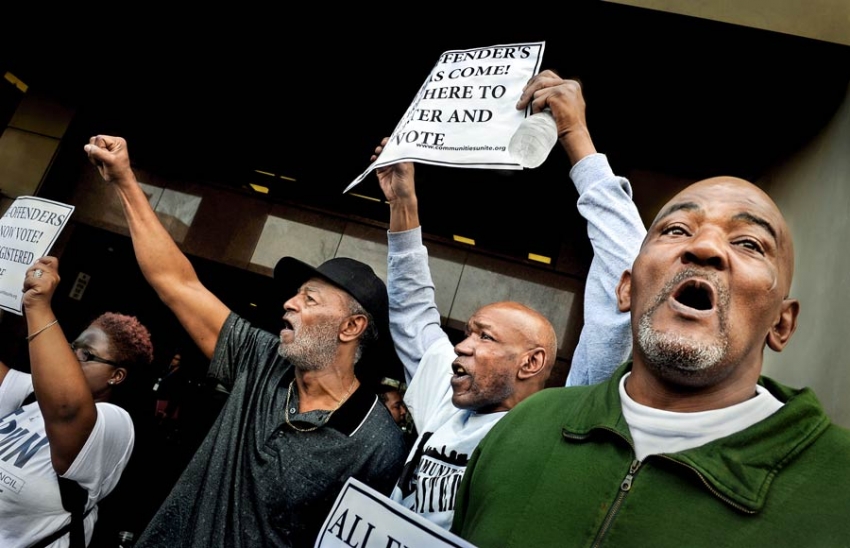 The Growing Movement To Grant All Prisoners the Right To Vote

Formerly incarcerated activists say that taking away voting rights because of felony convictions is racist and undemocratic, period.

“Going to prison doesn’t mean you forfeit your right to care about what happens to your family, your child, your community or even your country.”

Emmett Sanders was incarcerated at age 18 and spent 22 and a half years in prison. When he spoke with In These Times in June, he had only been home for 18 months. After getting the lay of the land—learning things like how to write a résumé and use a cell phone, and what the hell a Google was—he threw himself headlong into the work that now consumes so much of his daily life: advocating for voting rights for those behind bars. “I can’t forget being [in prison] and I can’t forget the people who are still there, you know?” he says. “They fight every day of their lives and the very least I can do is take the opportunity to fight with them.”

One of the keystones of that work is “Full Human Beings,” a report Sanders authored in May for the People’s Policy Project, a progressive think tank. In it, he argues that a society that restricts the right to vote is committing an assault on a basic moral principle—that every citizen should have a say in the decisions that shape their lives. Mend that error, Sanders insists, and “the United States might actually join the ranks of countries that view incarcerated people as full human beings.”

At last count, an estimated 6.1 million Americans (1.4 million of whom are still incarcerated) remain barred from voting due to a felony conviction.

Questions about the wisdom and legitimacy of felony disenfranchisement laws have been bursting into popular debate for years. It wasn’t long after the 2000 presidential election—decided by 500 votes in Florida—that it dawned on researchers that opening the polls to Florida’s hundreds of thousands of people with felony convictions would have swung the election to Al Gore.

The issue gets to the heart of a conflict as old as the country itself—one over who gets to shape the decisions that affect us all. Sanders is part of a rising chorus of grassroots activists, advocates and lawmakers working to re-enfranchise those with felony convictions. Their argument is twofold: First, that felony disenfranchisement is undemocratic in the plainest sense, since voting is vital to democracy. Second, that it is racist. Black people, who make up just 13 percent of the population, comprise 38 percent of Americans barred from voting due to a past conviction. Put another way, one in 13 black Americans has been stripped of their right to vote, four times the rate of other Americans, according to the research group the Sentencing Project.

While some states have had felony disenfranchisement laws on the books since the country’s earliest days, most of these codes were narrow, applying to only a few crimes. The laws expanded in the aftermath of the Civil War, as part of an elaborate, multifront campaign by lawmakers across the South to preserve white rule over black life. In 1865 and 1866, former slave states adopted a series of Black Codes—laws that made certain aspects of black life criminal offenses. Between 1865 and 1880, at least 13 states also passed broad felony disenfranchisement laws. Stroll along the wrong patch of land, speak a whisper too loud in the presence of white women, fail to prove your employment to white authorities—and be thrown in jail and barred from casting a ballot in one fell swoop.

On occasion, the authors and interpreters of these laws would come right out and say what they were up to. The Mississippi Supreme Court (in a ruling upheld by the U.S. Supreme Court in 1898) found that despite being “restrained by the federal constitution from discriminating against the negro race,” the state could still “discriminate against its characteristics, and the offenses to which its criminal members are prone.” The 1901 Alabama Constitutional Convention met to discuss “White Supremacy by Law,” including deliberate “manipulation of the ballot” to oppose “the menace of negro domination.” One new code barred those “convicted of a felony involving moral turpitude” from voting. In 2016, that law blocked 1 in 6 black adults in Alabama from voting (compared to 1 in 13 Alabamians overall), according to the Sentencing Project.

Felony disenfranchisement laws eventually made it up North, though the direct bow to white supremacy was often left behind. All the same, the racial impact lives on.

Today, a number of efforts are underway to restore those rights. Since 2016, at least five states—Alabama, Louisiana, Maryland, New York and Virginia—have enacted policies that expand voting rights for people convicted of felonies who are on probation or parole. Louisiana, for example, recently  restored ballot access to those who have been out of prison for at least five years. In Alabama, after enormous pressure from outside advocacy groups and stinging exposés from local journalists revealing the maze-like nature of the state’s voting laws, Gov. Kay Ivey signed the Definition of Moral Turpitude Act in 2017, clarifying that felonies such as marijuana possession do not disqualify people from voting. With tens of thousands of Alabamians now eligible to have their rights restored, the Southern Poverty Law Center and the Campaign Legal Center are mobilizing local leaders to help affected voters register.

According to the Brennan Center for Justice, 14 states introduced felony re-enfranchisement bills in the most recent legislative session, but only Louisiana’s made it into law. In Florida, formerly incarcerated people have launched an effort to return voting rights to those who have served their full sentence. Amendment 4 will appear on the November ballot, giving Florida’s voters a chance to weigh in on whether they approve of the state’s first-in-the-nation rate of disenfranchisement.

Most advocacy efforts have focused on people who have already exited prison, but Sanders and the People’s Policy Project point out that the same moral logic applies to those inside. People’s Policy Project President Matt Bruenig argues that, instead of “a somewhat arbitrary battle over when exactly ex-offenders should have their voting rights restored,” Democrats should be advancing the principled position that “those voting rights should never go away in the first place.”

It’s not a groundbreaking idea. South Africa, much of Europe and the European Court recognize incarcerated people’s right to vote. In the United States, however, only Maine and Vermont do—two of the three whitest states.

It isn’t hard to imagine this as the next frontier in voting rights. Massachusetts’ Emancipation Initiative is working hand in hand with current and formerly incarcerated people to end the state’s prohibition on voting behind bars. In the meantime, they’re taking steps to subvert it. Through their Ballot Over Bars program, for instance, someone who’s eligible to vote on the outside is matched with someone who’s been disenfranchised on the inside and commits to voting according to their choices, giving the incarcerated person a proxy voice. The program is now in its second year, and nearly 100 outside volunteers have signed up, co-founder Elly Kalfus says.

“If people in prison have the right to vote, then politicians will actually pay attention to what’s going on in prisons,” Sanders says. Stripping prisons of funding for job training and education programs is an easy way for elected officials to balance budgets. Sanders also stresses that “laws that have nothing to do with prison directly affect incarcerated people as well. Going to prison doesn’t mean you forfeit your right to care about what happens to your family, your child, your community or even your country.”

Sanders’ report, and recent efforts to make voting truly universal for adults, come during the runup to the 2018 midterms. Democrats are especially hopeful that surging voter enthusiasm will help them win a congressional majority. With Republicans trying their damnedest to shrink the pool of eligible voters, advocates have insisted that Democrats start looking for avenues to expand it in the states where they have the power to do so.

Sanders, however, goes beyond arguing that the disproportionately poor and black people sitting in our jails and prisons are a potential reservoir of votes for one party or the other. Rather, he argues those we’ve locked away should be allowed to vote as a step toward something much deeper: recognizing them as full human beings.

It’s clear that the sense of powerlessness that blooms in prison is what drives Sanders’ commitment to amplifying the voices of the incarcerated. “I’ve seen people not be acknowledged as people. Every day, every moment you’re there, there’s like this huge concrete maw just trying to devour you, trying to just eat your humanity, eat your dignity, and you have to fight it every single day,” he says. “Any human being should be moved to recognize the right of other human beings to have their voices heard.”