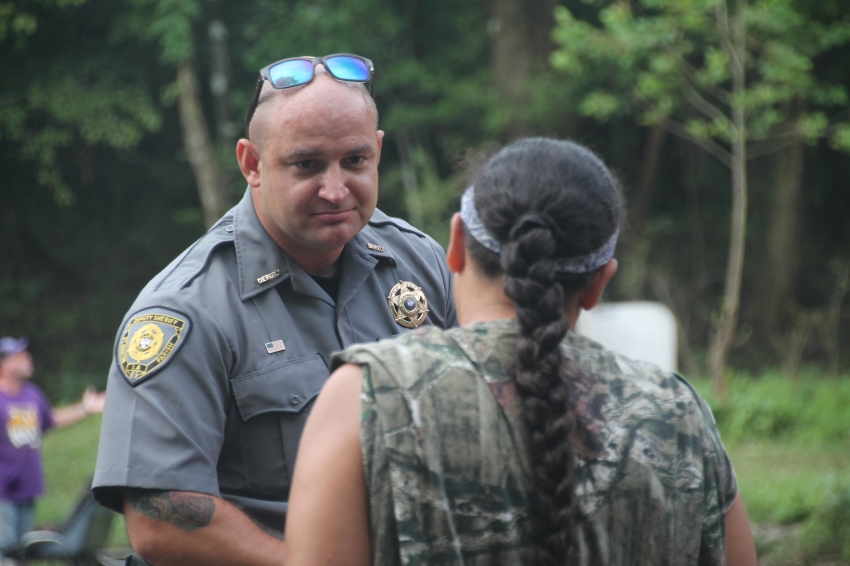 Water protectors say the swamp was swarming with uniformed police working for the company.

Arrestees had no way of knowing that they were being questioned, detained and handcuffed by off-duty police.

ST. MARTIN PARISH, LOUISIANA—As construction equipment roared back to life, opponents of the Bayou Bridge Pipeline—part of the larger project connecting the Dakota Access pipeline to refineries in Louisiana—shook their heads in dismay. They had spent hours explaining to sheriff’s deputies that Energy Transfer, the company building the pipeline, did not have the required permission from landowners to begin construction—a fact later confirmed by a judge.

But on that day in September 2018 under Louisiana’s scorching summer sun, there was no convincing the deputies from the St. Martin Parish Sheriff’s Office. Instead, they told the activists—who call themselves water protectors—they would be arrested on felony trespassing charges.

“Why are you working for this company?” asked an independent reporter. Like the water protectors, she had received permission to be there by a landowner.

“Do it look like I’m working for this company? Do this company pay me? I work for the sheriff’s office,” replied Lt. Jay Capterville.

Records show that Capterville—who was standing sock-footed, his issued uniform and weapon caked with mud, shoes lost hours before along the half-mile trek to the remote site—was, in fact, not on the clock for the sheriff’s office that day. As for why he was in the swamp in uniform, there’s a likely explanation: He’s among the 58 sheriff’s deputies granted permission to moonlight for Hub Enterprises, which is Energy Transfer’s security contractor for the Bayou Bridge project. Capterville did not respond to requests for comment by deadline.

In October 2018, the sheriff’s office granted the deputies retroactive permission to work with Hub Enterprises, accounting for 27% of the parish’s sheriff’s deputies. No request was denied. Of 19 deputies identified at the site between Aug. 1, 2018, and Oct. 13, 2018, all but five were off the clock.

“Such a high percentage really calls into question the fundamental fairness of what people who go up against the pipeline can expect,” says Bill Quigley, a law professor at Loyola University New Orleans who is representing the arrested water protectors. “It looks like the St. Martin Parish Sheriff’s Office is a branch of the pipeline company.”

“Taking an example from the anti-labor movements around mining a century ago,” says Cherri Foytlin, a water protector who serves on the indigenous women’s advisory council of the L’eau Est La Vie (Water Is Life) protest camp, “the oil companies are now hiring Pinkerton men who serve corporate profits at the sacrifice of basic human rights and needs.”

Sixteen people were arrested in the parish between Aug. 1, 2018, and Oct. 13, 2018, on charges of felony trespassing. Off-the-clock deputies made up the majority—or all—of the deputies who could be identified on the scene of the arrests. One of the arrestees was a journalist reporting on the pipeline and a coauthor of this report, Karen Savage; the other 15 were water protectors.

Arrestees had no way of knowing that they were being questioned, detained and handcuffed by off-duty police. The officers wore full uniforms and used parish-issued weapons and tech. Some, like Capterville, denied they were working for a third party.

The arrestees were charged under Louisiana’s new “critical infrastructure” law, which makes trespassing on oil pipelines a felony, punishable by up to five years in prison. Energy Transfer was among the oil companies that lobbied to pass the legislation in Louisiana and Iowa.  Based on a model bill by the American Legislative Exchange Council, such laws have been passed in five states, and the Trump administration recently proposed a federal version.

In a lawsuit filed in May, water protectors, landowners and several environmental organizations asked a federal court to declare the law a violation of the First Amendment. (Co-author Karen Savage is a plaintiff.)

Quigley, who also represents the plaintiffs in the constitutional challenge, tells In These Times, “It's particularly troubling in this circumstance because the petrochemical lobby created and passed this law over the objection of citizens, then they hired taxpayer funded public law enforcement to be their private security, then directed those private security people to arrest people under the law that's questionable to begin with.”

Many of the arrests occurred on contested property, where a judge later ruled Energy Transfer did not have permission to be. The off-duty deputies choked and pepper-sprayed water protectors, and allegedly stunned one individual with a Taser and tackled Foytlin.

Anne White Hat, an indigenous water protector who serves with Foytlin on the camp’s advisory council, was arrested moments after leading a prayer ceremony at a public boat ramp on Sept., 2018. Every deputy who could be identified at the scene was off-duty.

Deputies claimed there was a warrant out for White Hat’s arrest. “If you have a warrant for my arrest, I want you to show it to me now,” said White Hat as a deputy pulled back her arms and handcuffed her. Months later, she said she has still not seen evidence that the warrant existed at the time.

She says she was placed in the back of a St. Martin Parish Sheriff's Office cruiser and driven for about an hour on narrow country roads through the sugar cane fields of south Louisiana before reaching the jail, a trip that should have taken about 25 minutes.

About halfway into the ride, she says, she was transferred to another vehicle.

“When the cop car stopped and the ETP cop in St. Martin Parish Sheriff’s uniform got out and walked to the back of the truck, the thought did cross my mind if this is the part where I disappear,” White Hat says.

“It was terrifying for sure—there was no one around to witness the exchange and I wasn’t actually sure at that point if I would make it to the jail. Now I’m even more angry that ETP literally bought St Martin Parish Sheriff’s deputies.”

Hub previously hired off-duty Louisiana probation and parole officers to work security for the Energy Transfer project. But after officers using department-issued gear refused to identify themselves and violently pulled water protectors from kayaks in early August, the Louisiana Department of Public Safety and Corrections revoked its officers’ permission to work for Hub.

The St. Martin deputies appeared to be working more than their approved shifts, however. Records and photos show off-duty deputies routinely present at the site on days other than Saturday or Sunday, and at least four arrests were made on weekdays by off-duty officers.

Energy Transfer, formerly known as Energy Transfer Partners, is the same company whose security likened Standing Rock water protectors to jihadists, brutally attacked them with dogs and sprayed them with water cannons in freezing temperatures.

Alexis Daniel, spokesperson for Energy Transfer, told In These Times that the company hired security “to monitor our construction sites for the safety of our workers and those in the surrounding area” and that they “do not tolerate illegal activity on our right of ways, nor activities that would put our workers or other landowners in close proximity in danger.”

Foytlin rejects this narrative: “Why would this sheriff's department be allowed to be a traitor to working-class folks by not protecting life, but protecting profit as a priority?”

Karen Savage is an investigative journalist who has covered environmental justice communities extensively. She was arrested twice under Louisiana's felony trespass law while reporting on resistance to the Bayou Bridge pipeline, including for this piece. Sarah Lazare is a reporter and web editor with In These Times.

How To Build the Zero-Carbon Economy