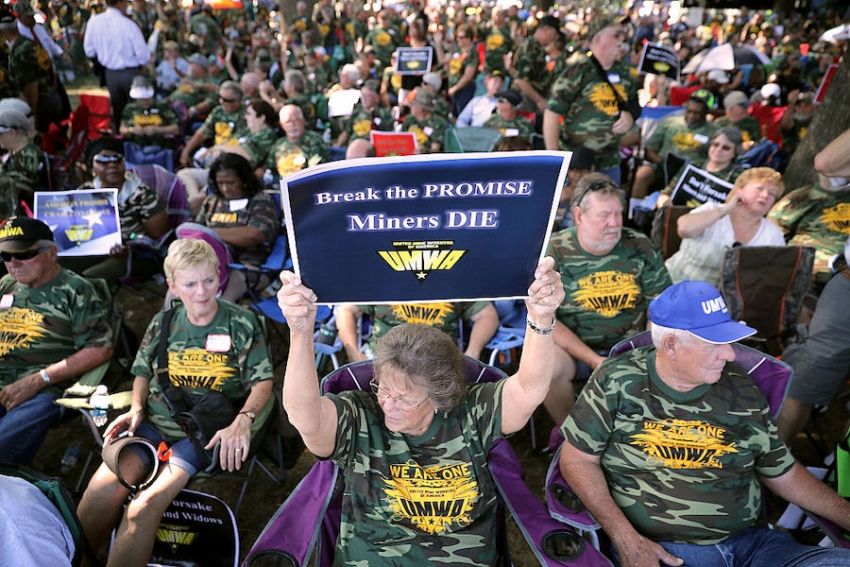 Thousands of members of the United Miner Workers of America rally in 2016 for legislation to protect retired miners' healthcare and pensions. As coal companies continue to go bankrupt, more are trying to dodge their commitments to retirees. (Photo by Chip Somodevilla/Getty Images)

Even in Bankruptcy, Coal Companies Can’t Stop Selling Out Workers

The industry sees its employees like it sees the Earth: Just another resource to exploit.

“The retirees are too old to go back to work. So what happens when they can’t afford their house payment or car payment or medical bill?"

After key environmental protections were rolled back by the executive order of President Donald Trump in March 2017—including the Obama-era Clean Power Plan—coal magnate Robert E. Murray cheered the news. “I think it’s wonderful, not just for the United States coal industry, our miners and their families, but it’s wonderful for America,” said Murray, then-CEO of Murray Energy, the largest privately owned coal company in the United States. Murray had aggressively lobbied for the rollbacks, and In These Times published photos of his secret meeting, earlier that month, to deliver a four-page rollback wish list to Energy Secretary Rick Perry. It was sealed with a hug between the two.

Murray has portrayed himself as a champion of coal miners against environmentalists. “I live among these people,” he told the Guardian just before Trump signed the order. “These are the people who fought the wars and built our country and they were forgotten by Democrats who had gone to Hollywood characters, liberal elitists and radical environmentalists.”

But Murray Energy’s 2019 bankruptcy filings tell a different story. Authored by Murray’s nephew and new CEO, Robert Moore, they point to other coal companies that “used bankruptcy to reduce debt and lower their cost structures by eliminating cash interest obligations and pension and benefit obligations.” Reneging on workers’ hard-earned pensions and benefits has left competitors “better positioned to compete for volume and pricing in the current market.”

The language suggests Murray Energy intends to follow the example of companies like Westmoreland Mining and Blackjewel, using bankruptcy to evade coal miners’ healthcare and pension costs. In a particularly dastardly case, in 2007, Peabody Coal created Patriot Coal, a doomed-to-fail spinoff company, and dumped 10,000 retirees there; they lost their pensions after Patriot promptly filed for bankruptcy. But these bankrupt companies still manage to make good on their debts to banks and hedge funds.

Gary Campbell, 37, a member of United Mine Workers of America (UMWA) and worker at the Murray Energy-owned Marion County Coal Company in West Virginia, is scared for fellow workers who have retired. “The retirees are too old to go back to work,” Campbell says. “So what happens when they can’t afford their house payment or car payment or medical bill? They’re being thrown to the curb. It’s horrible to see people treated like this.”

There’s no question that coal workers face an uncertain future, but a phaseout of coal is a necessity: Coal is the highest carbon-emission fuel source. A 2015 study found that to prevent the worst effects of climate change, the vast majority of fossil fuels—including 92% of U.S. coal reserves—must stay in the ground. That precarity will be felt most by the poor and working class who, unlike Robert E. Murray, won’t be able to retire to a secluded mansion when heat and natural disasters threaten their homes.

The way to champion coal workers is not to save the industry from environmental regulation, as Murray would like us to think, but to ensure a just transition from a fossil fuel economy—something coal companies have no interest in, but environmentalists and labor unions do. The Green New Deal resolution put forward in February 2019 by Rep. Alexandria OcasioCortez (D-N.Y.) and Sen. Ed Markey (D-Mass.) calls for the United States “to achieve netzero greenhouse gas emissions through a fair and just transition for all communities and workers.” Such a shift could bring coal miners dignified, union jobs in another sector—whether it’s coal cleanup, renewable energy, public transportation, healthcare or another field.

Stanley Sturgill, a retired UMWA coal miner and climate justice activist, advocates a just transition away from fossil fuels as part of a Green New Deal. “As far as a just transition, the only way to look at it is you have to find something equal or better paying than [the jobs] they’ve got right now,” Sturgill says. And it will be workers, not companies, who become the critical leaders in this process.

The just transition can start immediately: Sara Nelson, president of the Association of Flight Attendants-CWA and a vocal supporter of the Green New Deal, has repeatedly called on climate activists to support the 2019 American Miners Act (AMA), supported by UMWA. It would protect the pensions of more than 100,000 coal miners whose retirement fund was depleted by the 2008 crash and rescue the healthcare of miners whose companies went bankrupt.

The AMA is only a first step. In a just world, a full transition would include not only the dignified union jobs called for by the Green New Deal resolution, but shut down the coal companies and redistribute their assets to workers before they can go bankrupt and abandon their obligations—or further harm the climate.

At the very least, the Robert Murrays of the world should be recognized for what they are: enemies of the working people who, as Campbell puts it, “made them their fortune.” Coal companies treat their workers just as they treat the earth: something to extract value from, then discard.