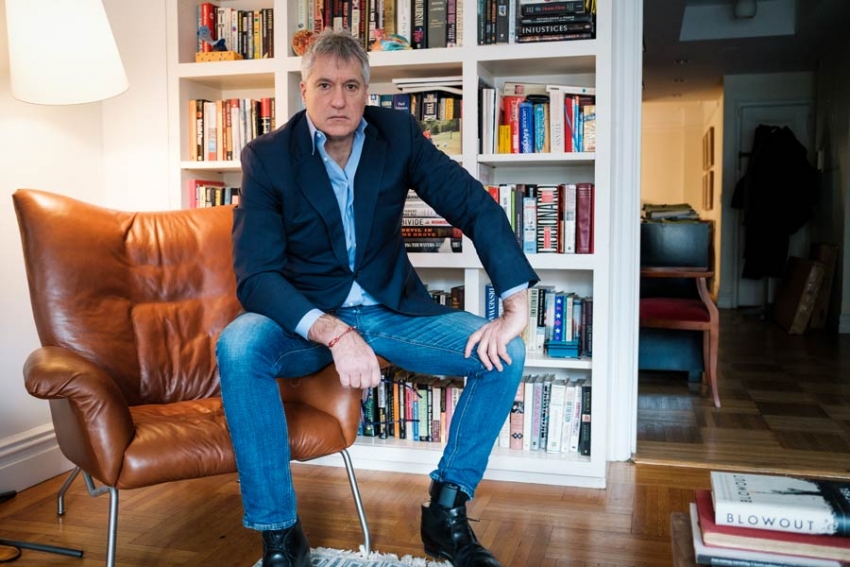 Human rights lawyer Steven Donziger won a $9.5 billion class action settlement against Chevron in 2011 on behalf of 30,000 people in the Amazon, but has been under house arrest since 2019 after Chevron retaliated through various legal maneuvers. (Photo by Raul Coto Batres)

Chevron is using the U.S. courts to avoid paying out $9.5 billion for environmental damage—and to silence lead lawyer Steven Donziger.

NEW YORK CITY—Human rights lawyer Steven Donziger, 58, prowls his Manhattan apartment from bright living room to dim kitchen and back, too restless to sit still while discussing the events that have brought him to this moment: nervous about the future, his law license suspended, his every movement surveilled by a black ankle bracelet he never imagined he’d be wearing. He’s been under house arrest since August 2019.

“It feels like I am a corporate political prisoner,” Donziger says. He successfully sued the multinational energy corporation Chevron on behalf of 30,000 indigenous people and farmers in the Amazon rainforest. Oil exploration and drilling by Texaco (later acquired by Chevron) polluted Ecuador’s rainforest from the 1960s to the early 1990s, leaving behind nearly a thousand unlined pits of waste. Birth defects, miscarriages and cancer rates skyrocketed.

After a nearly 20-year legal battle, Donziger’s team won a $9.5 billion judgment against the oil company in 2011. But with the blessing of a federal judge, Chevron has used the U.S. courts to avoid paying out.

With the case now in its 27th year, Chevron has employed dozens of law firms and thousands of lawyers to overwhelm the Ecuadorans’ legal team.

“Chevron seems to be trying to kill off the very idea of me,” Donziger says, referring to human rights activists more broadly.

In 2012, Chevron filed a case against Donziger and his firm using the Racketeer Influenced and Corrupt Organizations Act, known as RICO, characterizing the Ecuadoran judgment against the company as extortion. In 2014, U.S. District Judge Lewis A. Kaplan, in New York, barred the Ecuadorans from enforcing the judgment. Kaplan, known as a corporate-friendly judge, concluded that Chevron—not the Ecuadoran plaintiffs—was the real victim, and that Donziger and his legal team were guilty of bribery and fraud.

Activist groups condemn Chevron’s long-term strategy to “demonize Donziger” (as phrased in a 2009 company memo) but say Kaplan’s treatment of Donziger is more alarming. Kaplan’s rulings appear by design to send a chilling message to human rights lawyers: You could be disbarred, bankrupted—even thrown into jail—for challenging powerful corporate interests.

Rick Friedman, an attorney who represented Donziger in the RICO trial, says “[Donziger]  did an unforgivable thing, which is to get an unprecedented judgment against an oil company, and the powers that be cannot tolerate that.”

Chevron’s RICO case hung on the testimony of Alberto Guerra, a disgraced former judge from Ecuador who, with Kaplan’s OK, was allowed to testify—even though Chevron had paid Guerra to claim Donziger and his counterparts had won the class action suit by promising a kickback to the presiding judge. In a related case in 2015, however, Guerra admitted under oath he had lied in Kaplan’s courtroom. In the five years since, Kaplan has not modified his ruling. Instead, Kaplan has intensified judicial oversight of Donziger.

In July 2019, Kaplan found Donziger in criminal contempt. Donziger had raised funds in an effort to make Chevron pay the $9.5 billion through a court system outside of the United States, but was ordered to turn over to Chevron all the money he raised.

“Chevron will continue its efforts to hold the lawyers and investors behind this fraudulent scheme accountable,” the company said in a July 2019 press release.

But Kaplan’s 2019 decisions against Donziger departed from normal judicial oversight. For starters, Kaplan brought criminal contempt charges, though the underlying case is civil. Kaplan also ordered Donziger to turn over his computer, phone and online passwords to help the court identify assets that Chevron could seize from Donziger to recover the oil company’s legal fees. Donziger has appealed.

When Kaplan couldn’t convince federal prosecutors to take up the criminal contempt case against Donziger, the judge made a virtually unprecedented decision: Rather than leaving it to the court system’s random judicial selection process, Kaplan deputized a private attorney to prosecute Donziger before a federal judge picked by Kaplan. By August 2019, U.S. District Court Judge Loretta A. Preska had placed Donziger on home detention, which has now lasted more than six months.

Canadian environmentalist Rex Weyler says Kaplan’s goal is to force Donziger to abandon the case and starve it of resources. “They are hoping that the power of their money will tilt the scales of justice so far that they will never be held accountable,” Weyler says.

“[Chevron has tried to] turn this case into a story about [Donziger] rather than the actual pollution in the Amazon, one of the worst environmental oil-related crimes in history,” says Paul Paz y Miño, associate director of Amazon Watch, an organization that has been supporting the Ecuadoran plaintiffs.

Luis Yanza, an environmental activist from Ecuador and president of the Frente de Defensa de la Amazonía (the Amazon Defense Coalition) representing many of the 30,000 plaintiffs, says they are indignant over Kaplan’s ruling.

“It’s injustice,” Yanza says. “There was no fraud. The damages exist. The damages are killing a lot of people here.”