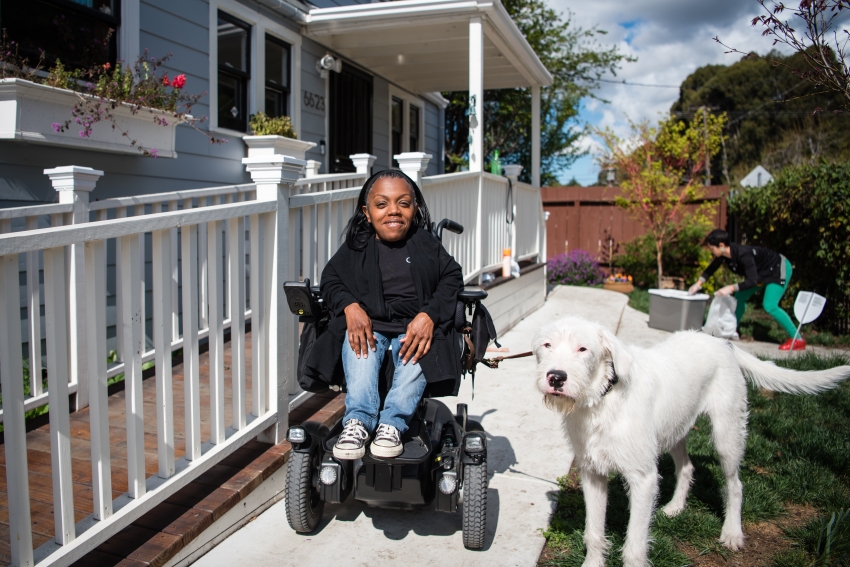 In the Bay Area, mutual aid projects are helping build community in a time of social distancing.

OAKLAND, Calif.—“I already disinfected the door handle, so come on in!” Yomi Wrong says. A rambunctious puppy eagerly eyes us through the gate. “Shiloh can’t wait to see you.”

As a healthcare compliance manager, Wrong is used to being out in the world—from going into her office to taking the dog for long strolls around Lake Chabot. All that changed when she began sheltering in place to lower her chances of contracting COVID-19.

“I’ve lost so much human connection,’’ Wrong says. “My sister lives in Alameda, but I haven’t seen her in over a month because she is immunocompromised. The two of you are the people I most consistently see.”

My friend Katie Loncke and I have been stopping by Wrong’s home every other day for the past three weeks as volunteers for a mutual aid project launched by the Disability Justice Culture Club (DJCC), a collective of five disabled and neurodivergent queer people of color in Oakland. Mutual aid projects like these aim to bring people together to help meet each other’s basic survival needs.

“Many of us don’t have support from our families—especially the queer elders who don’t have kids or [who] live by themselves,” says Jay Salazar, a DJCC member and a mutual aid network architect. “They carry so much knowledge and vision. Knowing these people are some of the most at risk pushes us to do this work.”

As coronavirus cases in the Bay Area increased in mid-March, DJCC began pairing people who were at higher risk, disabled or elderly with allies who could provide mutual aid during a shelter-in-place order. According to its sign-up form, DJCC “prioritizes [Black, Indigenous and people of color] who need to limit exposure to others because of health concerns.”

Loncke and I connected through the network with Wrong, who welcomed the extra support after buying her first house, going through a difficult breakup and recovering from an illness. Between the two of us, we run Wrong’s dog Shiloh, scoop dog poop, empty her cat’s litter box, go with Wrong to get groceries, and do other tasks while maintaining six feet of distance and following other safety protocols.

This is about more than just helping to take out the trash, however. The three of us are—as DJCC puts it—“fighting isolation, collectively.”

“Our mutual aid is also a form of collective rebalancing, because we are prioritizing people that the government deems disposable,” Loncke says. “Officials are already talking about rationing care and withholding life-saving medical treatment from patients deemed high-risk of fatality. To us, this logic is flawed and deeply misguided. We choose to live in a way that truly values everyone.”

This isn’t DJCC’s first time mobilizing mutual aid practically overnight. In fall 2019, California’s largest utility, Pacific Gas & Electric (PG&E), implemented rolling blackouts, leaving millions without power in a widely criticized move aimed at preventing wildfires. Fearing that many in their community would be unable to power ventilators, recharge wheelchairs, or refrigerate insulin, DJCC pooled funds to buy generators and found accommodations outside the blackout zones for people who needed power. Similarly, when the Bay was blanketed in toxic wildfire smoke in fall 2018 and 2019, DJCC made do-it-yourself air filters, distributed masks and sealed up homes.

“We talk about the foundational principles behind disability justice and what it means to be in community and interdependent, we talk about it, we organize around it,” Wrong says. “But with the PG&E shutdown and now this global pandemic, I’m seeing it in action to ensure our community survives.” Disability justice principles, such as those articulated by the performance project Sins Invalid, include leaving no mind/body behind, centering the leadership of the most impacted, and committing to intersectional, cross-movement organizing.

The practice isn’t always easy, however. Salazar notes that many disabled people have not only “had to stop working, isolate ourselves, and worry about our families, but also worry about where to get our next meal. The physical and mental toll that takes on us is real. We shouldn’t have to do the work [of helping meet people’s basic needs] that elected officials—who, unlike us, are still getting paid every single day—should be doing.”

Still, many activists say that in a system not set up to meet everyone’s needs, help from elected officials won’t come fast enough or reach those who need it most. Instead, communities across the country are self-organizing. These bottom-up, hyperlocal solidarity networks often reveal the system’s failure to protect people, teach neighborhoods to self-organize, and permanently reshape social relationships.

“It’s an elegant way of supporting people—organic, grassroots, authentic, not rigid. It allows each person to show up as they are and contribute what they can and not be ashamed, on the need side or the giving side,” Wrong says. “It’s a beautiful spiritual exchange between people.”