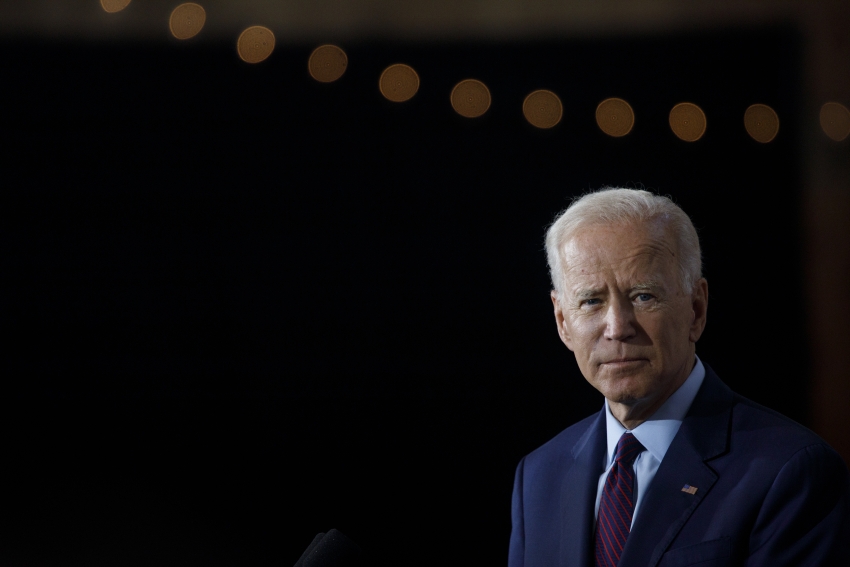 The presumptive Democratic nominee is failing to call for sanctions to be lifted, even if just for the duration of the pandemic.

Today, people in Iran can’t get basic medical supplies, like ventilators and CT scanners, as they face one of the world’s worst COVID-19 outbreaks.

Ending President Trump’s maximum pressure campaign against Iran—which is spiking the country’s COVID-19 death rate—should be low-hanging fruit for Joe Biden, who is now the Democratic Party’s presumptive nominee. The 2015 Joint Comprehensive Plan of Action (JCPOA), also known as the Iran nuclear deal, was lauded as a cornerstone of the Obama-Biden administration. It gave Iran sanctions relief in exchange for constraints on Iran’s civil nuclear enrichment. When Trump pulled out of the JCPOA in 2018 and imposed a complex matrix of sanctions targeting industries and individuals (unfortunately following the lead of Democrats and Republicans alike), he not only unleashed collective punishment on the people of Iran, but also unraveled the flagship foreign policy achievement of the Obama era.

The JCPOA was an important act of diplomacy—far preferable to war—but it was also an extortion racket, premised on the notion that Iran, which had no nuclear weapons program, was a threat that had to be contained, while the United States, which has a massive nuclear weapons arsenal, is not. And it was signed just months into the U.S.-Saudi-U.A.E. war on Yemen, which was framed as an effort to counter Iran, whose role in Yemen was vastly overstated. However, what is clear is that opposition to the deal has come from the most rabid, racist and fanatical pro-war forces in U.S. politics—think tanks and politicians who want war with Iran and have no qualms about sacrificing Iranian lives. And the continuation of sanctions, which were tightened in the middle of a global pandemic, is a staggering crime against humanity: Today, people in Iran can’t get basic medical supplies, like ventilators and CT scanners, as they face one of the world’s worst COVID-19 outbreaks.

Which is what makes Joe Biden’s failure to call for a lifting of sanctions, even if just during the pandemic, so glaring. Biden waited until April 2 to break his silence on the issue in a statement that opened with the line, “In times of global crisis, America should lead. We should be the first to offer help to people who are hurting or in danger.” It goes on to criticize Trump’s “maximum pressure” strategy, and to declare, “Whatever our profound differences with the Iranian government, we should support the Iranian people.” Yet nowhere in the statement does Biden actually call for an end to sanctions, even if just for a few months—a demand that should be easy for somehow who has lauded the JCPOA on the campaign trail.

Instead, Biden’s primary demands are focused on providing clearer guidelines for humanitarian exemptions and streamlining “channels for banking and public health assistance from other countries in response to the health emergency in Iran.” Biden calls for specific steps:

issuing broad licenses to pharmaceutical and medical device companies; creating a dedicated channel for international banks, transportation companies, insurers, and other service firms to help Iranians access life-saving medical treatment; issuing new sanctions guidance to these groups and international aid organizations to make it clear how they can immediately, directly, and legally respond to the tragedy in Iran, without fear of penalty; and, for entities already conducting enhanced due diligence, it should issue comfort letters to reassure them that they will not be subject to U.S. sanctions if they engage in humanitarian trade with Iran to support its COVID-19 response.

Cavan Kharrazian, international program researcher for the Center for Economic and Policy Research, told In These Times that Biden’s demands are nothing more than half measures that allow him to rhetorically dodge an actual call to lift sanctions. “The way I interpreted Biden's comments,” Kharrazian says, “he was calling for the Trump administration to streamline the process and clear channels for humanitarian work. That's something that is theoretically already supposed to be in effect right now. The only thing that helps is to temporarily waive maximum pressure sanctions imposed by Trump.”

Indeed, the Trump administration already claims there are humanitarian exemptions. “The whole world should know that humanitarian assistance into Iran is wide open. It’s not sanctioned,” Secretary of State Mike Pompeo said on March 20. Yet this exemption is in name only. A complex and difficult-to-navigate web of sanctions, alongside belligerence and threats from the Trump administration, have spooked companies from doing business with the country. A 2019 report from Human Rights watch found that, even before the pandemic began, “these exemptions have failed to offset the strong reluctance of US and European companies and banks to risk incurring sanctions and legal action by exporting or financing exempted humanitarian goods.”

According to Kharrazian, “To simply expand humanitarian exemptions will take way too long. Right now, with the humanitarian exemptions that exist, the process of getting licences for crucial equipment to fight COVID-19 can take two to three months through the Office of Foreign Assets Control [the enforcement arm of the Treasury Department]. I don’t see how that process can do things quickly enough to save lives.”

Yasmine Taeb, senior policy counsel at Demand Progress, an activist organization, echoed Kharrazian’s concerns. “When Biden put out his statement, it seemed like a really nice statement because it is filled with fluff. But if you zoom in, all he is saying is we need to clear humanitarian channels to Iran and provide assurances to entities and companies that want to do business with Iran in response to COVID-19 that they won’t be subjected to U.S. sanctions. But he stopped short of actually calling for a waiving of maximum pressure sanctions.”

“The fact that the Biden team worked on the nuclear deal, and he couldn't even call for temporary waive of sanctions, even though Biden has indicated he would return to JCPOA, doesn't make sense,” Taeb continued. “He’s not even supporting the deal his own administration drafted.”

It is worth comparing Biden’s statement to an open letter led by Rep. Alexandria Ocasio-Cortez (D-N.Y.), Rep. Ilhan Omar (D-Minn.) and Sen. Bernie Sanders (I-Vt.), and signed by 34 members of Congress. The letter calls on Pompeo and Treasury Secretary Steven Mnuchin to “substantially suspend sanctions on Iran during this global public health emergency in a humanitarian gesture to the Iranian people to better enable them to fight the virus.” It goes on to call specifically for the suspension of economic sanctions: “Sanctions relief that should be considered are those that encompass major sectors of the Iranian economy, including those impacting civilian industries, Iran’s banking sector and exports of oil, and should last for at least as long as health experts believe the crisis will continue.”

The call for relief from economic sanctions is important because Iran, already in the grips of a recession, is poised to suffer economically from the COVID-19 crisis: Any “humanitarianism” must also look at how poor and working-class people are suffering as jobs dry up and wages plummet.

The letter won praise from the #EndCOVIDSanctions campaign, which describes itself as “a nationwide coalition of progressive organizations and grassroots activists working to end the U.S.’s deadly blanket sanctions on Iran.” In a statement following the letter’s release, an Iranian-American community organizer with the “No War Campaign,” said, “If this virus has taught us anything, it is that our health and lives are deeply connected and interdependent on a global scale. The U.S. must do its part in flattening the global curve and lift its deadly sanctions on Iran immediately.”

Yet, powerful Democrats seem to be aligning their talking points with Biden’s—not with the authors of this letter. On April 3, Sen. Bob Menendez (D-N.J.), Ranking Member of the Senate Committee on Foreign Relations, and Rep. Eliot L. Engel (D-N.Y.), Chairman of the House Committee on Foreign Affairs, released a statement issuing similar demands: “Publicly clarify that U.S. law does not penalize medical or humanitarian transactions”; “Address banks’ reluctance to finance sales of medical goods to Iran”; “Work quickly with other governments to set up humanitarian channels for companies to provide COVID-19 related assistance to Iran”; and “Temporarily raise the ceiling on the amount of funds permitted to be sent to Iran for humanitarian aid.” And, like Biden, they stopped short of calling for an end to maximum pressure sanctions.

By failing to call for an end to sanctions, Engel and Menendez are in good company. The most powerful Democrats in Congress—Nancy Pelosi (D-Calif.), the speaker of the House, Chuck Schumer (D-N.Y.), Senate minority leader, and Rep. Steny Hoyer (D-Md.), House majority leader—all declined to sign the letter organized by Sanders, Omar and Ocasio-Cortez. And prominent Biden endorser Samantha Power, former UN ambassador, recently published an article in the New York Times about the need for U.S. leadership amid the global pandemic that doesn’t even mention Iran sanctions, or numerous other U.S. acts of aggression.

But it doesn’t stop there. While declining to call for an end to sanctions, Menendez’s statement actually reinforces the basic justification for sanctions. “The United States has imposed sanctions on Iran for its nefarious nuclear weapons development, support for terrorism and human rights abuses,” he says. “There is no evidence that the regime has stopped its sanctionable behavior. Moreover, simply lifting sanctions that have been imposed for ongoing malign behavior will not provide immediate or meaningful relief for the Iranian people.”

After claiming that lifting sanctions won’t help Iran’s humanitarian crisis—a patently untrue statement—Menendez goes on to call for a number of technical and procedural tweaks. “Congress has made clear through legislation that our sanctions regime should never hinder humanitarian and medical relief. To that end, the Trump Administration has a number of technical and public diplomacy tools it should use to ensure that the United States does not contribute to the Iranian regime’s cruelty of preventing humanitarian relief from reaching those most in need.”

That Biden is aligning with a senator who espouses this kind of pro-war rhetoric shows that he’s far from where he needs to be on ending Iran sanctions. Given Biden’s prominent position, anything short of calling for those sanctions to be lifted—a position that is hardly radical, as Biden should well understand—amounts to complicity in the preventable deaths of countless Iranians.