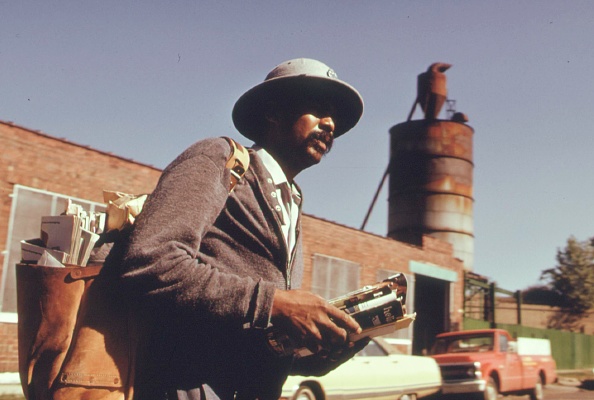 A postal worker delivers mail on Chicago’s South Side in 1973. The Postal Service may stop delivering by the end of September, thanks in part to its 1970s-era reorganization, which Lawrence Swaim examined in the August 10,1977, issue of In These Times. (Smith Collection/Getty Images)

The Post Office used to be federally funded. Then, Republicans passed legislation requiring it to “pay for itself.”

The United States Postal Service (USPS) was in trouble before the Covid-19 outbreak, but now it’s fighting for its life—officials predict a $13 billion revenue loss amid declining mail volume this year alone and warn the agency will run out of cash by September unless Congress steps in.

President Donald Trump has called the USPS a “joke” and refused additional funding unless the price to send packages increases by “four or five times.” Republicans now see an opportunity to deal a death blow to a public service they have tried to bleed dry for decades.

Previously a federally funded cabinet-level department, President Richard Nixon overhauled the Post Office in 1971, which created what we know today as the USPS. The move followed a wave of militancy by more than 200,000 clerks and carriers in 30 major cities who walked off the job for higher pay and collective bargaining rights. While postal unions did win better pay and bargaining rights, the reorganization was a double-edged sword. The 1971 federal legislation established the USPS as a new independent agency and required it to “pay for itself”—meaning the agency would receive no tax dollars and instead fund itself directly through the sale of its postage, products and services. As explained by Lawrence Swaim, former leader in the Postal Clerks Union, in a four-part series for In These Times in 1977:

The effort to make the post office run like “a regular business” had advantages for conservative interests as well. They could announce to the world that they would create a postal system in which revenues could match expenditures—in which the Post Office could “pay for itself,” and if this turned out to be impossible or necessitated unreasonable rate increases they could blame it on labor costs, focusing public resentment on the unions.

Ever since, conservatives have pushed the idea that the USPS is just a mismanaged business—and because of that, should be fully privatized. Importantly, Swaim warns that, in its current form:

The USPS is, in many ways, an entirely new phenomenon in this country, one for which we really have no name. Neither completely in the private nor the public sector, it tends to combine the most repressive and least democratic features of both. Its major tendency is to insulate from unions and particularly the paying public all control of its operations. Perhaps in more ways than we wish to admit, it is the American institution of the future.

Then, in 2006, a Republican-controlled Congress passed a law requiring the USPS to fund its future health benefits for retirees at an annual rate of at least $5.5 billion. By the end of 2019, the USPS carried $160.9 billion in debt—with nearly $120 billion of it from that requirement. So now, on paper, the USPS appears to be broke.

Still, the USPS remains one of the country’s most popular federal agencies and will have an especially crucial role in an election season likely to depend on mail-in ballots. It also provides more than 600,000 stable, good-paying jobs (21% of which are taken by African American workers). Congress must hold the line to protect the USPS.