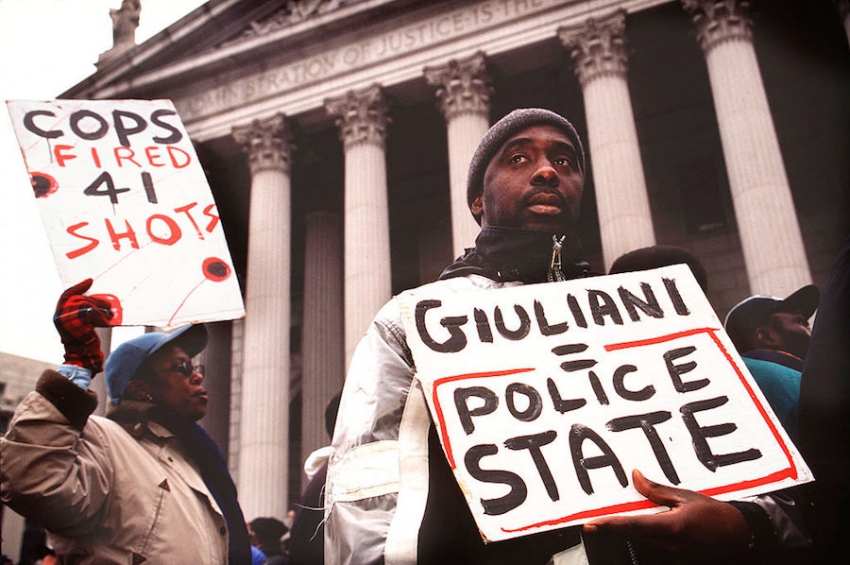 Activists in a Feb. 9, 1999 protest in New York City demand a probe into the police killing of African immigrant Amadou Diallo. (Photo by Jonathan Elderfield/Getty Images)

"Examples of blacks and other minorities killed by police officers with near impunity could fill three times this space. Unfortunately, the list is still not long enough to convince political leaders to effectively confront the racism responsible for these crimes."—Salim Muwakkil, 1997

Vineland, N.J., was abroil in August 1989 over the acquittal of a white police officer who had shot and killed Samuel Williams, a young black man. During a two-day rampage in response, police arrested more than 30 protesters, 13 of whom a grand jury indicted that October. I wrote for In These Times:

African-Americans have reached the limits of their tolerance for what they perceive as racist treatment and are increasingly responding in ways that threaten civil disorder. It is a problem that will only escalate unless it finds a place on the national agenda and prompts a firm response.

Eight years later, summing up yet another report on police killings of black people, I was less sanguine:

The Amnesty International report may cause a temporary spasm of civic embarrassment in New York, but if previous experience in Chicago and Los Angeles is any indication, don't expect much to change. Amnesty International issued a 1990 report describing police torture and brutality in Chicago and an equally scathing 1992 report on the Los Angeles Police Department. Neither the police nor their political overseers in either city have moved to address the concerns raised in those reports.

Examples of blacks and other minorities killed by police officers with near impunity could fill three times this space. Unfortunately, the list is still not long enough to convince political leaders to effectively confront the racism responsible for these crimes.

In 1999, protesters were chanting the names Tyisha Miller and Amadou Diallo. Miller, 19, had been slain by 12 police bullets in Riverside, Calif. Diallo, 23, had been killed by 19 NYPD bullets, of a total 41 fired. My April 1999 column was titled “No Cop Accountability”:

Although dozens of protests demanding police accountability have been held in virtually every major city in America, there has been a persistent failure to investigate and punish officers who brutally violate citizens’ rights. … “After a while, people get tired of protesting for nothing,” says Ron Daniels, executive director of the Center for Constitutional Rights.

But this time is different. The response to the murder of George Floyd has been unprecedented in scope. Every state has hosted demonstrations. Gestures of solidarity have appeared in virtually every country.

Why is it different, and will it matter?

After all, the list of black victims of police violence is long, and long ignored. Trayvon Martin, Laquan McDonald, Tamir Rice, Michael Brown, Philando Castile, Ezell Ford, Stephon Clark, Sandra Bland, Eric Garner are just the recent household names. The latest list includes Dreasjon Reed, Ahmaud Arbery and two black women who died by police bullets in their own homes, Atatiana Jefferson and Breonna Taylor. Those of us with longer memories recall Joseph Gould, Aswan Keshawn Watson, James Cooper and Aaron White. My memory stretches back to my hometown of Harlem in 1964 when the police shot 15-year-old James Powell, sparking the first Harlem riot of the 1960s.

Previously, even as the evidence of racial bias mounted, police forces seldom made efforts to reform their practices—with the rare federal “consent decree” often ignored.

Frazier had no idea she was sparking global support for the Black Lives Matter (BLM) movement. But, clearly, this video evidence is making the difference.

A confluence of unique cultural dynamics—the ubiquity of smartphones, the vitality of social media, the persistence of an aspirational youth movement, the isolation of a pandemic—seems to have trained a global spotlight on the Black Lives Matter movement as the custodian of this zeitgeist.

BLM began as a hashtag after the 2013 acquittal of 17-year-old Trayvon Martin’s vigilante killer. The full-fledged movement launched the following year when unarmed black teen Michael Brown was shot dead by police in Ferguson, Mo.

But propelled by the power of that 10-minute film, protests of the racist choreography of American policing—a style that still dances to the rhythms of the slave patrols from which it emerged—are now becoming routine in American life.

Earlier this year, too, the killing of Ahmaud Arbery—a black man jogging through a white community in Georgia, killed by a pair of white vigilantes (one a former cop)—was caught on tape, chronicling a modern-day lynching. His killing was virtually ignored until the video emerged.

And then there was the Central Park birdwatching incident May 25, the same day George Floyd died. A video shows white Amy Cooper calling the cops on black birdwatcher Christian Cooper (no relation), who had asked Amy to leash her dog. An enthusiastic Obama supporter in 2012, Amy was not averse to weaponizing white fragility to endanger the life of an innocent black man she repeatedly referred to as “African American” and claimed was menacing her.

These wider social attitudes reveal a society still plagued by anti-black assumptions that fuel racist policing. Even as we bask in a consensus demanding police reform, we continue to struggle with the appropriate response. Some political leaders are beginning to tamper with the structure of their police departments, but these ginger approaches still fear police unions while public sentiment resists any ostensible weakening of police power.

The more radical voices among us urge a complete reimagining of American policing, completely extricating its slave-patrol patrimony and creating institutional structures framed by different incentives and more limited functions.

If ever there was a time to act on those radical impulses, that time is now.