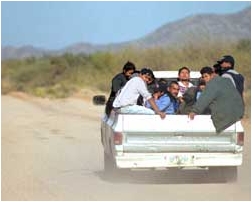 BY Rose Arrieta
Share TweetReddit0 EmailPrint
Despite the Mexican government’s well-publicized crackdown in May on the smuggling business here and elsewhere along the border, this town of 17,000 remains a jumping off point for thousands of migrants trying to get to the United States. Altar is the place where they make connections, rest up and prepare for their journey. In this town—located 160 miles south of Tucson—migrants filled with dreams and desperate needs drive a thriving underground economy.

This dangerous journey across the merciless Sonoran desert fattens the pocket of everyone but the migrant—from the buses, vans, and pickup trucks that shuttle migrants to la linea (the border), to the hotels and safe houses, to the scores of small, makeshift businesses that sell them their food, water, clothing, blankets, and shoes.

Mireya Morales, 32, landed in this dusty border town after more than a month of trying to get to the United States.

Morales left her comfortable home in Denver, when her mother, who lived in Mexico, became deathly ill. Since she was in the United States illegally, she had reservations about going to Mexico, but it was either take the risk, or never see her mother—who was dying from cancer—alive again.

So Morales left her husband in charge of their two boys, 5 and 9, packed a few items and headed to Durango. Six weeks later, her mother died in her arms.

She estimates her journey from Durango has already cost $2,500. She is braced to pay more. So far she has paid out $1,600 for a pollero (smuggler) to take her to Phoenix and then get her back to Colorado. That doesn’t include the $150 she paid someone to help her cross the Rio Grande—a failed attempt. Or the $400 she paid for fake documents when she tried to cross at the El Paso-Juarez line—another failed attempt. Or of the money for buses, food and hotels she spent when her pollero directed her to travel hundreds of miles to this Sonora outpost.

“Migration is solving our economic problems here,” says Altar mayor Francisco Javier Garcia Aten. “Transportes (buses and vans), phone call businesses, casas de huespedes (hostel-like rooms), all of that converges to help our local economy. What would happen to Altar if there were no migrant phenomenon? We would be a very poor pueblo, extremely poor.”

Since 19 undocumented migrants—13 of them Mexican—died in an airless tractor-trailer after being abandoned at a truck stop in South Texas in May, the Mexican government has intensified its campaign against smugglers. May’s sweeps were part of President Vicente Fox’s efforts to stem the work of criminal groups who profit from the smuggling business, which officials estimate is the second most profitable criminal enterprise in Mexico after drugs. Polleros, also called coyotes, typically charge between $1,500 and $1,900 to bring migrants across the border to cities throughout the United States. But no one seriously thinks the crackdown will have much of an impact—not when need and hunger are fueling the push north. Says mayor Garcia Aten, “You can put 10,000 fences up and the migration won’t stop.”

An estimated 700 to 1,000 migrants pass through the town each day. And they all need a place to rest. That’s where casas de huespedes come in. In the scores of airless barracks-type, concrete rooms that line the back streets migrants rent space to sleep. These cement buildings hold two and three levels of carpet-covered plywood. Customers sleep side by side up to 14 across on each level. The rooms are dank, dark and musty. The scent of blood, diapers, dust, and desperation hangs thick in the air.

Maria, who agreed to an interview on the condition that her last name not be used, owns a casa de huespede. She says she charges 25 pesos or (about $2.50) for a sleeping slot. “We get about 30 people a night,” she says. “It’s better than sleeping on the street.”

Many of the migrants are small farmers from southern Mexico who live in indigenous communities in Oaxaca, Chiapas, Veracruz, Guerrero, and Yucatan. “I have a parcel of land but it doesn’t give any more maize (corn) or frijol (beans),” says Francisco Castro, a farmer from Juxtlahuaca, Guerrero, who came to Altar with his cousins, brother, friends and neighbors. In total there are eight of them—all from the same town. The youngest is 13. The oldest is in his 50s. “The time comes when you get tired of working the land and working and earning nothing, you sell and you get paid hardly anything. So we are leaving to help our families.”

Since the North American Free Trade Agreement (NAFTA) was established in 1984, the number of households living in poverty has increased by 80 percent, with some 75 percent of Mexico’s people now living below the poverty line. Added to that, income is increasingly unequally distributed, leaving Mexico with one of the hemisphere’s worst levels of income inequality.

The rural sector is in crisis, overwhelmed by grain imports from the United States, a decrease in commodity prices, and reduced government subsidies.

Mexican farmers get little if any support from the government. Between 1990 and 1994 the government provided Mexican farmers 33.2 percent of their yearly income. That figure has now dropped to 13.2 percent, and trade tariffs, lifted on U.S. imports in January, according to the terms of NAFTA, makes it even cheaper for Mexico to buy goods from the United States. For example, since NAFTA, U.S. corn exports have doubled and the price of corn produced by Mexican farmers dropped 48 percent, says Tim Wise of the Global Development and Environment Institute at Tufts University.

The agricultural crisis spurred by the NAFTA-mandated lifting of tariffs has become a major issue in Mexican politics. A coalition of farmers’ organizations has blocked highways, city streets, and government buildings to protest the tariff removal that has exacerbated rural poverty.

The tariff reductions favor Mexican industrialists such as the Confederation of Industrial Chambers, which has warned Fox not to renegotiate NAFTA. The tariff elimination allows Mexican manufacturers to buy imported raw materials cheaper than locally produced materials and then export their finished goods.

With such internal political pressure, Fox has been slow to address the agricultural crisis. Meanwhile, across the border, U.S. officials have suggested that renegotiation is not an option, lending credence to Fox’s claims that such a process could result in the loss of certain portions of the treaty that benefit Mexico. At a November 2002 meeting in Mexico City, Fox and U.S. Secretary of State Colin Powell reached an agreement to tighten border security, neglecting tariff concerns.

Without attempting to renegotiate NAFTA, Fox has taken only minimal steps to ameliorate the crisis, proposing subsidies for grain farmers and lower diesel and electricity costs for farmers. But even the “National Agreement on the Countryside” announced in April as a result of the months of farmer protests will not likely change trade rules until 2004 at the soonest. And that will be too late for many of Mexico’s farmers, more than half of whom live in extreme poverty that leaves them with few options but to migrate north.

Mayor Garcia Aten says the economy of the towns in this region used to be based on agriculture and livestock. “The free trade agreement hit our economy extremely hard.”

“I don’t want to leave,” says Pablo, a 19-year-old Oaxacan migrant who used to pick corn. “But you earn so little. I earn in a day in the United States what it takes us a week to make here. We have to work, send money home, that—that or starve.”

Pablo and the other migrants have left their relatives, friends, homes, and community to face the cold, the heat, vigilantes with guns, bandits, and unscrupulous smugglers. In front of Nuestra Senora de Guadaloupe, van after van pulls in and people pile out. They will walk lightly along the desert sands, stopping to rest curled up against the saguaro (cactus), dreaming of their homes and the north. They will head to meat packing plants in Illinois and chicken processing factories in Alabama; agricultural work in Florida and California. They will fan out to find work as waiters, housekeepers, gardeners, dishwashers, factory workers, child care workers, construction laborers, and painters.

Clemencia, a young woman from Oaxaca, clambers onto the flatbed truck taking her to the border. Her eyes hold both fear and expectation. She turns and asks softly, “Should we watch our children go hungry?”